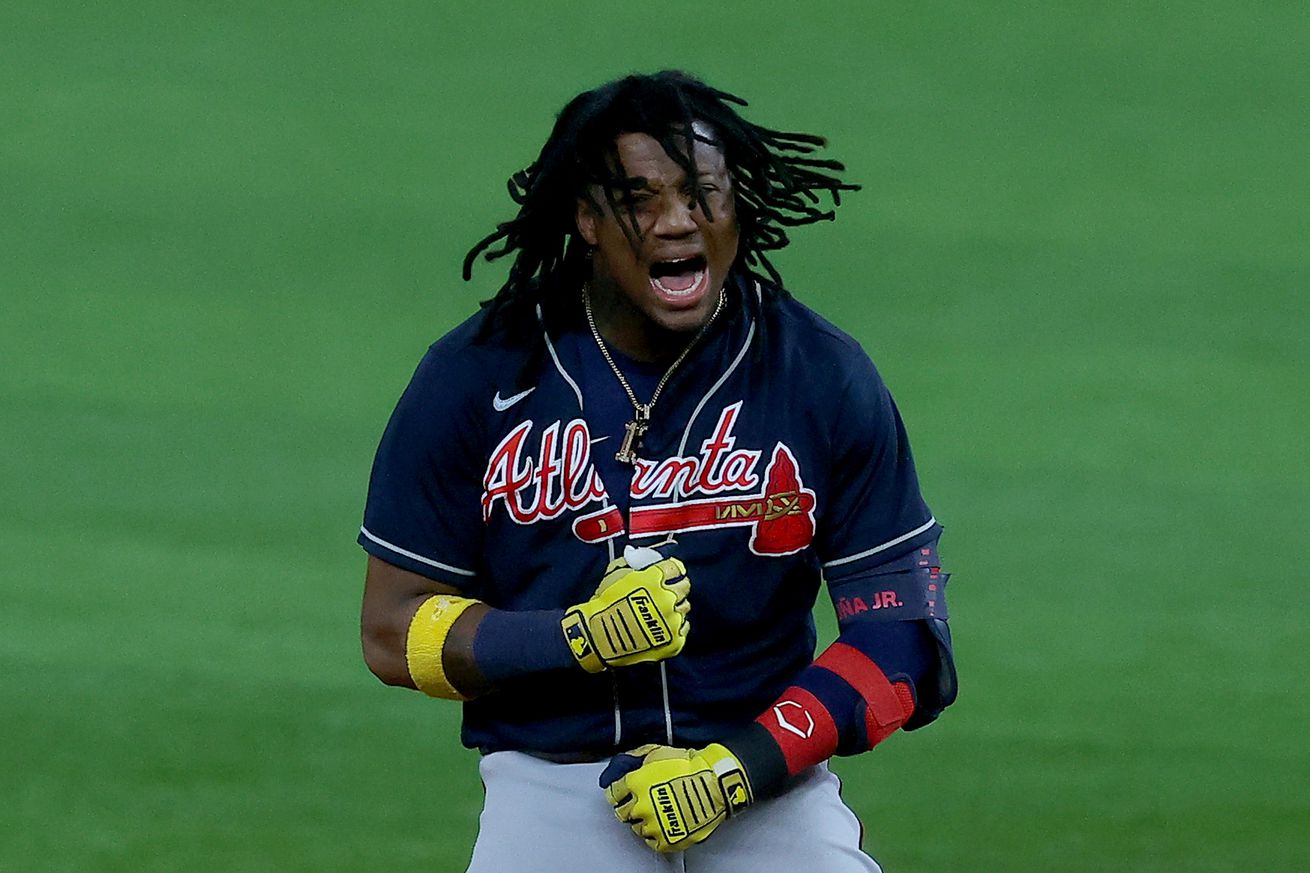 The Tampa Bay Rays secured their second victory in as many games against the Houston Astros, while the Atlanta Braves took the first game of the series against the Los Angeles Dodgers.

[MLB.com] Rays ride ‘extra velo’ to take 2-0 ALCS lead – With the win, the Rays take a 2-0 lead in the best-of-seven series, which has proven to be a good place to be. In playoff history, teams that have won the first two games of any best-of-seven series have gone on to win that series 72 of 85 times (85 percent). However, no team has rallied from an 0-2 deficit to win a best-of-seven series since the 2004 Red Sox came back from the only 0-3 deficit in MLB history, in the 2004 ALCS against the Yankees. Dating back to the ‘04 World Series, teams ahead 2-0 have gone on to win the series 22 straight times.

[Meadville Tribune] Margot’s homer, catch highlight Rays’ win – Manuel Margot hit a three-run home run one batter after a crucial Houston error and made a spectacular catch in right field in his former home ballpark, and the Tampa Bay Rays beat the Astros 4-2 Monday to take a 2-0 lead in the AL Championship Series. Margot homered off Lance McCullers Jr. with two outs in the first inning on an 87-degree afternoon. An inning later, he tracked George Springer’s long foul ball to right field while shielding his face from the sun and caught it as he tumbled over a padded railing atop a wall and landed on a walkway near the seats down the line at Petco Park. Margot popped up and held up his glove with the ball in it after a 102-foot sprint. That ended the inning, stranding two runners.

[Sports Illustrated] Braves Spoil Dodgers’ Plan, Smash Their Way to NLCS Lead – The Dodgers turned Game 1 of the National League Division Series into the turf version of Texas Motor Speedway. One after another, Los Angeles manager Dave Roberts threw his best, fastest arms at the Atlanta Braves. Walker Buehler, Brusdar Graterol, Dustin May, Victor Gonzalez, Blake Treinen … the State Fair would have run out of stuffed animals if these guys ever showed up at the speed pitch booth. They threw 67 pitches at the Braves at 96 mph or better, the ninth most by any team in any game this year. Six pitches hit triple digits. Roberts’ plan to expend his best arms worked for a long while. The game between the two highest-scoring teams in baseball was tied, 1-1, heading to the ninth inning–until the Braves did what the Braves have done all season: swing their way to a win. “It’s only a matter of time,” Atlanta first baseman Freddie Freeman said. “You saw it tonight. This offense is just so good. When guys are getting more comfortable and the swings are getting better good things happen.”

[Yahoo Sports] Braves steal Dodgers’ thunder with their own case for juggernaut status – Along came the Braves, who, for a night, were significantly better at finding what the Dodgers were worst at than revealing what they may lack, then jabbed, jabbed, jabbed until they had themselves a 5-1 win. In the top of the ninth inning, where, frankly, is where Dodgers’ troubles so often begin, the score was 1-1. In a home game, which qualified for the Dodgers on Monday night at Globe Life Field, that’s often a place for the closer, which the Dodgers don’t really have. This is not a wholly new situation for the Dodgers. It is a situation they are trying very hard to survive while paying adequate respect to Kenley Jansen.

[ESPN] MLB’s first fans of 2020 see Los Angeles Dodgers-Atlanta Braves NLCS opener – The announced attendance was 10,700, not including those who didn’t pay. Ticket prices ranged from $40 to $250 for the NLCS, and $75-450 for the World Series, which has already sold out. About 75% of fans appeared compliant with the requirement to wear masks except when “actively’’ eating or drinking. Some weren’t covering their nose or mouth. “We were wondering what the mixture of fans would be,’’ McIlroy said. “In this new age of what we’re going through, we were just curious. When we came in, we saw a lot of Dodger blue out there.’’ There were plenty of Braves logos, too, and the tomahawk chop chant was audible when Ronald Acuna Jr. stepped in as Atlanta’s leadoff hitter against Walker Buehler.

[ESPN] Baseball Hall of Famer Joe Morgan dies at 77 – Hall of Fame second baseman Joe Morgan, a key member of the Cincinnati Reds’ famed Big Red Machine, died Sunday. He was 77. Morgan died Sunday at his home in Danville, California, family spokesman James Davis said in a statement Monday. Morgan struggled with various health issues in recent years, including a nerve condition, a form of polyneuropathy. Morgan was a two-time National League Most Valuable Player, a 10-time All-Star and a five-time Gold Glove Award winner. He is widely regarded as one of the best second basemen in baseball history, and he gained renown for his 25-plus years as a broadcaster after his playing career.

[MLB.com] Beane could leave A’s for new career – For over two decades now, Billy Beane has been at the helm of the A’s front office, with his “Moneyball” success establishing himself as a figure whose popularity goes beyond baseball circles. It’s become hard to imagine Beane — whose official title is executive vice president of baseball operations — not running the show in Oakland. But that scenario might be slowly turning into a reality. According to a report from the Wall Street Journal, RedBall Acquisition Corp., a business venture that Beane co-chairs, is attempting to merge with Red Sox owner John Henry’s Fenway Sports Group by purchasing a portion of Henry’s company for an estimated $8 billion. Since Fenway Sports Group owns the Red Sox, Beane would technically be financially invested in the club, which would present a conflict of interest and likely force him to end his tenure with the A’s.

[MLB.com] Pham recovering after San Diego stabbing – The incident occurred Sunday night, shortly after 10:30 p.m. According to police, Pham asked two strangers who were arguing to move away from his car, the San Diego Union-Tribune reported. No vital organs were hit in the stabbing, though Pham’s skin was pierced and he required stitches.