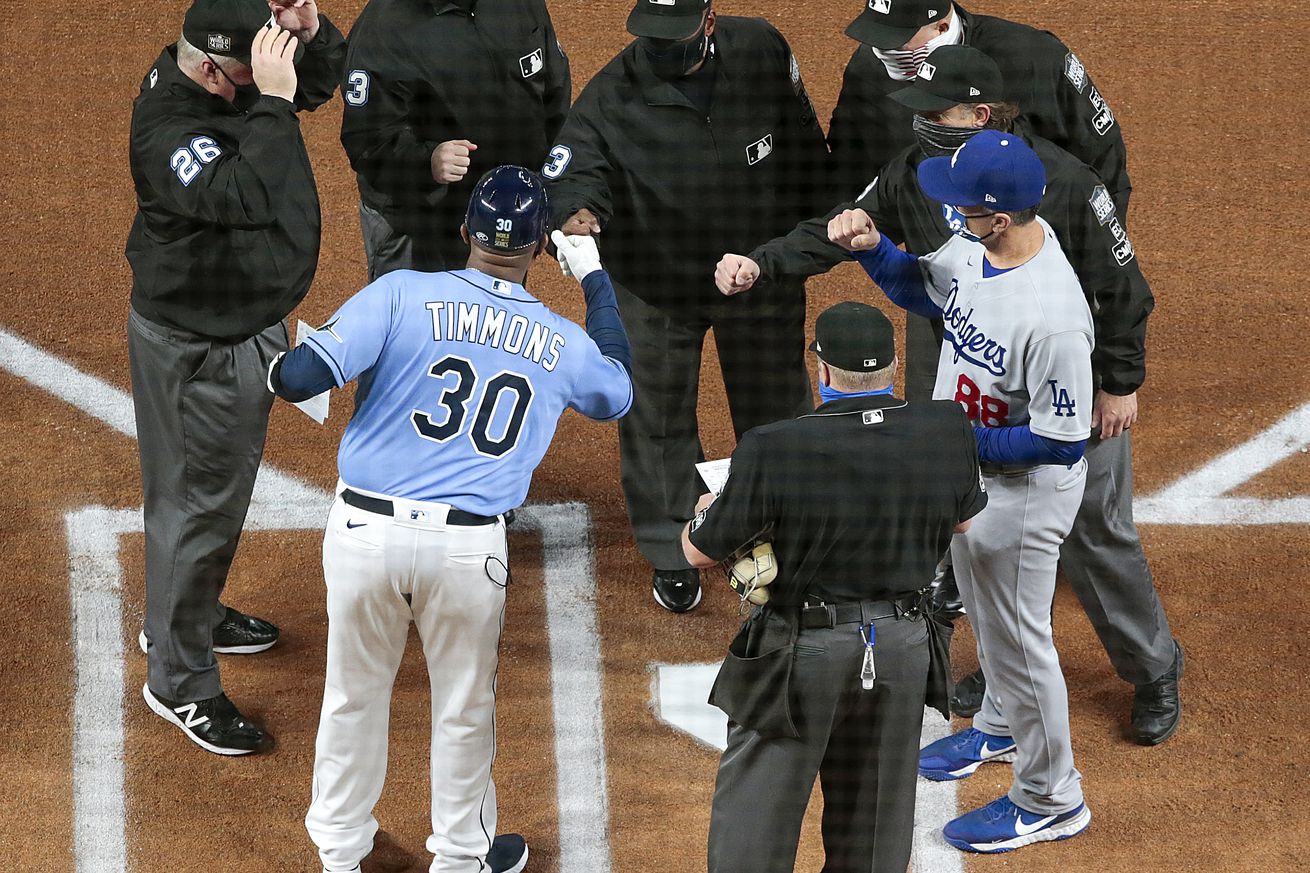 Down but not out, the Tampa Bay Rays will need to win two games in a row to earn their first World Series title.

[Sports Illustrated] What’s It Like to Be in the Bubble? Comfortably Numb. – Joe Kelly and Joey Wendle met in the sixth inning of World Series Game 2 Wednesday night and again about 12 hours later in the lobby of MLB’s official “bubble” hotel. The Dodgers pitcher and Rays third baseman may be enemy combatants, but their happenstance encounter in the lobby was that of two regular Joes, just one of the many friendly greetings that happen frequently as Los Angeles and Tampa Bay share the same physical space by day while trying to beat the daylights out of each other at night on a neutral site field, Globe Life Field. The World Series has the feel of a summer travel ball tournament, except the accommodations are not a roadside motel but a four-star hotel, the Four Seasons Las Colinas, with good food, amazing service, and eagle-eyed MLB security personnel to make sure nobody breaks health and safety protocols of what is known as The Secure Zone.

[Lancaster Online] Rays, Dodgers grateful to have fans at neutral-site Series – The roughly 11,000 mask-wearing fans each night — well, they’re supposed to be wearing face coverings — are roughly 11,000 more than players saw in the stands during the regular season and all of the American League playoffs. So 40,518-seat Globe Life Field might as well be full as far as the Tampa Bay Rays are concerned. “It certainly sounds like there’s 40,000 people in there,” manager Kevin Cash said. “Now, they might be 35,000 Dodger fans, which is OK. Any type of loudness and energy, that creates a lot in the dugout. That creates intensity. It’s loud and it’s been really refreshing to get to play with fans.” To Cash’s point, there has been plenty of Dodger blue visible for each of the 12 games with limited crowds since the start of the National League Championship Series two weeks ago. The 13th will be Game 6 of the World Series on Tuesday night, with Los Angeles in position to win its first title in 32 years. That also means plenty of masks with the iconic interlocking LA logo since face coverings are required except when fans are “actively eating or drinking” — an activity apparently more loosely defined by some.

[Fox Sports] The Imperfectly Perfect World Series – “You just don’t know what is going to happen next,” FOX Sports MLB analyst and 2009 World Series champion Alex Rodriguez said. It is hard to think beyond the moment in times of flux, but this gives every indication of going down as an excellent World Series that we’ll remember long into the future. But an excellent World Series and a World Series built around excellence are two different things. Sure, there have been shining individual performances, including Clayton Kershaw boosting his legacy with a strong Game 5 statement, but what has truly made the past week great is all the glorious imperfections that have gifted us a feast of head-shaking entertainment. Mistake-free baseball doesn’t permit what happened on Saturday night and the chaotically magnificent ending to Game 4. But when you see errors, missed steps and brain freezes from athletes who typically seem immune to them – yes, that’s what gets us on the edge of our seats. When those occurrences take place in batches at the most pivotal point of a matchup, that’s when it becomes unforgettable.

[Yahoo Sports] MLB Debt Totals $8.3 Billion as Manfred Mulls Options for Next Season – Major League Baseball’s 30 clubs have amassed an unprecedented $8.3 billion of debt from their various lenders and will suffer $2.8 billion to $3 billion in operational losses this year, Commissioner Rob Manfred told Sportico Monday in an exclusive interview. The debt was accrued so the clubs could fund their businesses during this COVID-affected season without fans in the stands and negligible ballpark revenue. “We are going to be at historic high levels of debt,” Manfred said. “And it’s going to be difficult for the industry to weather another year where we don’t have fans in the ballpark and have other limitations on how much we can’t play and how we can play.” The first neutral-site World Series will end either Tuesday or Wednesday at Globe Life Field, but it will bring no closure to the myriad problems MLB must address ahead of the 2021 season, many of them dictated by the coronavirus.

[Yardbarker] Japanese pitcher Hirokazu Sawamura drawing MLB interest – Japanese righty Hirokazu Sawamura has drawn early interest from multiple Major League Baseball teams. It’s not yet certain that the 32-year-old reliever will make the jump to the big leagues, but the nine-year veteran has pitched in front of plenty of MLB scouts during his tenure in Japan’s Nippon Professional Baseball. He’s an unrestricted free agent this winter, so he won’t be subject to the NPB-MLB posting system. Sawamura spent the bulk of his NPB career pitching with the Yomiuri Giants but got out to a rough start in 2020 — nine runs on 14 hits and eight walks in 13 2/3 innings — prompting the Giants to trade him to the Chiba Lotte Marines. He’s righted the ship with his new team, allowing just two runs on six hits and seven walks with 19 punchouts in 14 2/3 frames. Overall, Sawamura has logged 862 innings in his NPB career and worked to a 2.77 ERA with 8.1 K/9 against 2.7 BB/9. He began his career as a starter before becoming the Giants’ closer in 2015. He racked up 73 saves over the next two seasons as their primary ninth-inning option before missing the 2017 season due to a shoulder issue.

[247 Sports] Ex-MLB star Manny Ramirez, 48, signs one year-deal in Australia – It’s been 27 years since Manny Ramirez made his Major League Baseball debut and nearly a decade since his most recent appearance in an MLB game, but it appears that the 48-year-old Ramirez isn’t ready to hang up his cleats for good just yet. Ramirez, who starred for the Boston Red Sox at the height of his MLB career, has now officially signed a one-year deal with the Sydney Blue Sox, per Rotoworld — the latest of a development that was first reported in August. “As a life-long Boston Red Sox fan this is a dream come true,” team owner Adam Dobb said in a statement released at the end of August. “Manny has been interested in the Australian Baseball League for quite a while now. It was his preference to play down here in a big city and we’re thrilled to have a player of his caliber in Sydney.” Once regarded as one of baseball’s top sluggers, Ramirez has not appeared in a professional baseball game since playing in the Shikoku Island League Plus in 2017. His final MLB appearance to date was with the Tampa Bay Rays in April 2011, though he has attempted several comebacks with MLB systems — first the Oakland Athletics and later the Texas Rangers and Chicago Cubs. Ramirez also had a stop in the Dominican Professional Baseball League during the 2012-2013 season.