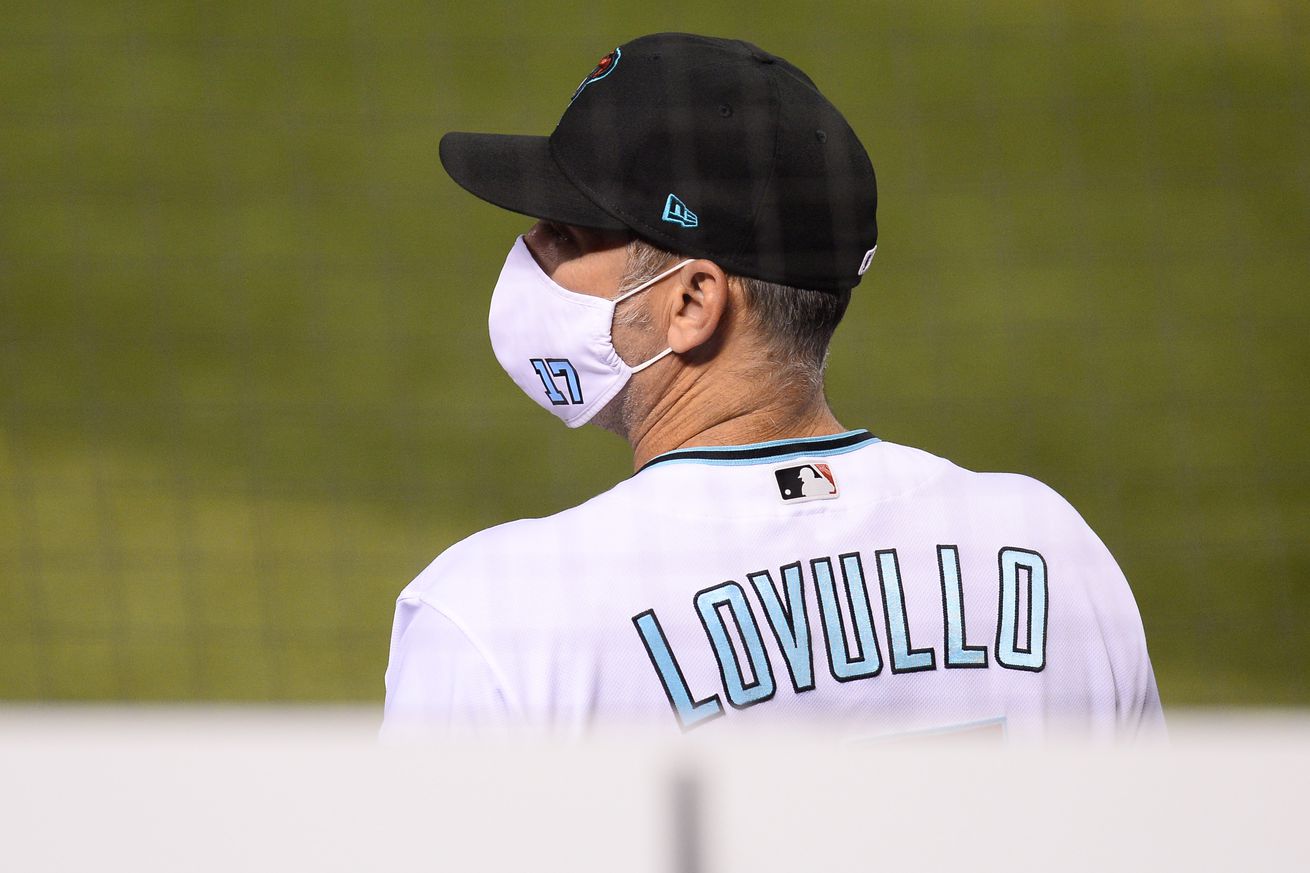 A manager recalling his high lights as a player and subpar WAR rankings. Is that what you want?

In the NL West, the D-backs hit the middle of the rankings, with the Giants falling in at No. 24 and the Rockies ranking dead last among the 30 teams. So what does this mean for the D-backs? No answer on that question on Arizona Sports, but we can give one here: it means we suck and will continue to do so in 2021. But number 22 means there are 8 teams below the Diamondbacks, right? Hurrah!

Lovullo didn’t have a lot of game-changing hits over the course of his career. The Arizona Diamondbacks manager finished his playing days with just 60 RBIs in parts of eight big-league seasons as a utility infielder. But he did have a handful of memorable knocks. Read and understand why he has faith in players you should not have faith in.

The Locked On Diamondbacks podcast published two episodes of a chit chat with Pavin Smith last week. Listen to his takes on his debut, being drafted, pitching or hitting, and some other small talk.

From unsung hero candidate on the AZ SnakePit to 0 comments on McCovey Chronicles. They need a SfGiantfaninDcOrSomewhereElse on there.

[AZ Central] Should Trevor Bauer win the Cy Young, it would trigger regret for D-Backs fans

We had Bauer, took Gregorius, ended up with Ray and now have Bergen. We very happy fans.

Personal memorabilia from the career of Hall of Fame catcher Johnny Bench was auctioned for just under $2 million. Bench plans to use the auction proceeds to fund his youngest children’s college educations. “The memories are still there. I still am the MVP,” Bench told the AP. “I’m blessed with what I’ve got and I’m enjoying my life.”

The Tazawa rule was an unwritten rule agreed to in 2008 by the 12 Japanese NPB teams, after Junichi Tazawa refused to sign with the team that drafted him and instead followed his dreams of playing in the major leagues. Under the provision, the 12 NPB teams agreed they would not sign players returning from the major leagues if they had previously rejected draft offers by the Japanese teams. In effect, a Japanese player that would go overseas would not be able to play pro ball in Japan ever again. The heavily criticized rule was rescinded this September and as such no disciplinary measures were imposed by the Japanese Fair Trade Commission.

The Fukuoka SoftBank Hawks beat the Lotte Marines in two games in a best-of-five (as pennant holders they held a 1-0 advantage) and will face the Central League-winning Yomiuri Giants in a rematch of last season starting on Saturday aiming to win the Japan Series for the fourth year in a row.

Baseball Australia was unpleasantly informed by the Auckland Tuatara that the team from New Zealand will not play ABL this 2020/21 season because of health and economic concerns, to which the ABL responded by “Auckland mismanagement” and “the ability for Auckland to compete in future seasons is now in serious doubt”. The absence of Auckland will make for a 6 team ABL this season since the Geelong-Korea team that consists mainly of Korean players pulled out because of “insurmountable” logistical and quarantine challenges.

Novi Sad was sad because it was beaten by Beograd. Pure poetry.

Egyptian community project Because Baseball has been named the winner of the 2020 Leaders Sports Community Award. A concept from Leaders, which champions excellence across international sport, the Leaders Sports Awards search for and recognise companies and individuals shaping the future of sport. Egypt + baseball = nice pic.

[Dominican Republic] The Licey destroys the Chosen One with heavy artillery

LIDOM opened its season this weekend and Google Translate provides us with the best headline translation ever seen on the Internet.

The World Baseball Softball Confederation announced that its OTT platform GameTime.sport has been awarded international broadcast and digital rights for the 2020-2021 season of the Nicaraguan Professional Baseball League (LBPN).

So bring out the beer and popcorn to watch Nicaraguan baseball with players like Bismarck, Nixson, Wuillians, Wiston, Freddman or Freddvil while the reincarnated Lenin tries to ride the Tren del Norte (North Train) to a championship. We know you people are waiting for this, so here is the link to the channel.

The Arizona Diamondbacks rookie infielder belted this August a 419-foot bomb that sailed over the fence in left-center field and into the San Diego Padres’ bullpen at Petco Park. The ball landed in front of Matt Strahm, Young’s former teammate, who held onto it. Nothing was going to stop Strahm from giving Young his first MLB home run ball, but only Jeff Young, Andy’s dad, knew that at the time. Strahm, a pitcher for San Diego, is a 2010 West Fargo High School graduate. Young graduated from West Fargo in 2012. “It was really special. We’ve had a chance to follow Matt and pull for him for a lot of years, and it was neat to see him doing the same for Andy,” Jeff said. “He was sincerely excited.”

And did you know that the Diamondback…

… is also a fighting championship in Adelaide, Australia? Sign up right now to kick someone’s ass in the Oval.