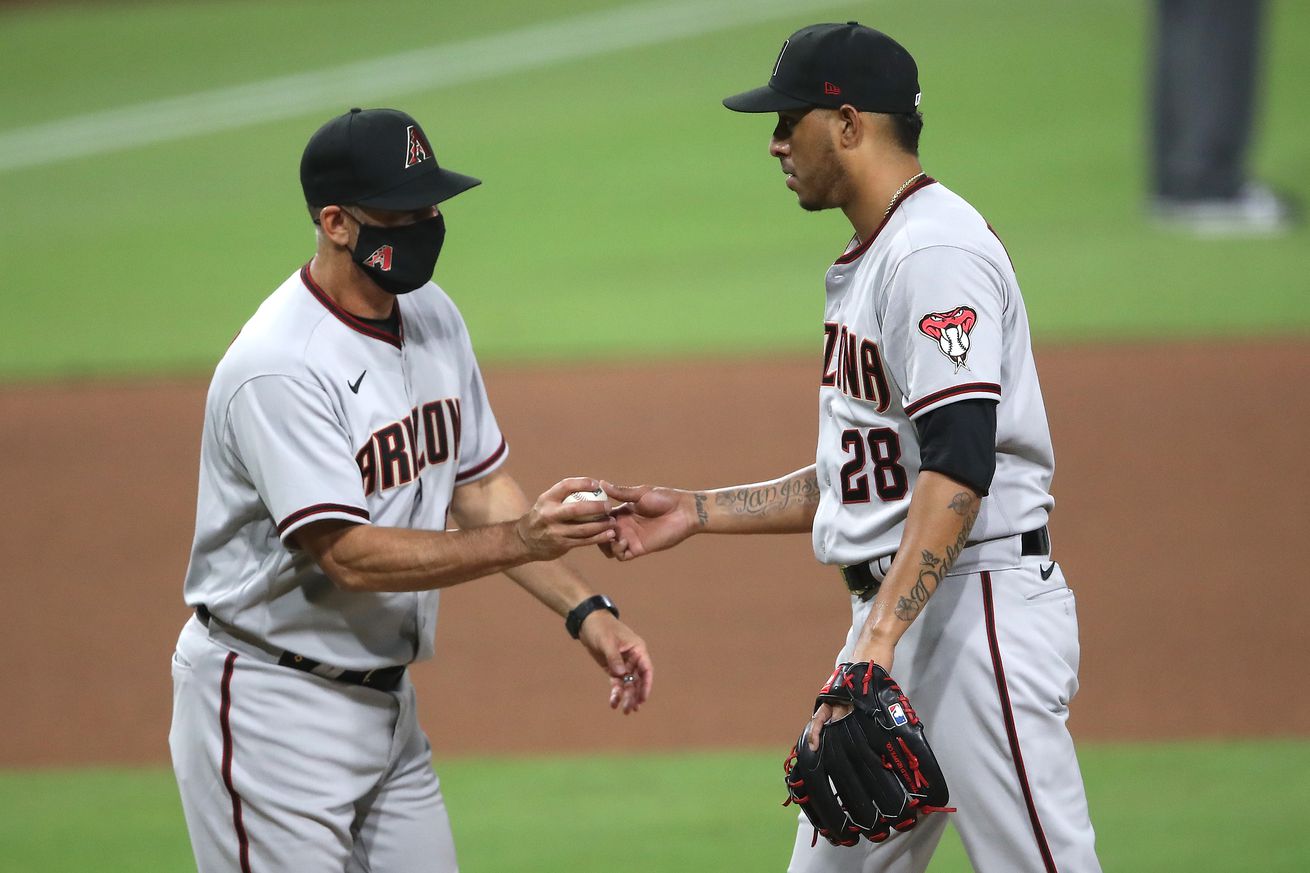 The Arizona Diamondbacks are not off to a great start barely putting up a fight against the San Diego Padres in the first two games of the season.

[D’backs.com] Ray runs out of steam against Padres – During the offseason, Robbie Ray adopted a new diet and workout regimen, yielding lost weight and increased strength. He tweaked his mechanics, shortening his arm action. He was described as being maniacally disciplined during the COVID-19 layoff as he kept up his throwing routine, and when he reported to Summer Camp, he told manager Torey Lovullo he could pitch in a regular-season game right then. Ray is still positive that the changes will pay off for him, but as he discovered Saturday night, it’s still a work in progress, as he lasted just 3 2/3 innings while the D-backs fell to the Padres at Petco Park for the second time in as many games to start the season, this time by a 5-1 margin.

[Arizona Sports] Diamondbacks only muster 1 run, lose 2nd game to Padres – Manny Machado and Wil Myers homered to back Dinelson Lamet, who pitched brilliantly into the sixth inning of the San Diego Padres’ 5-1 victory against the Arizona Diamondbacks on Saturday night. Lamet (1-0), who made 14 starts last year in a comeback from Tommy John surgery, held the Diamondbacks to one run and five hits while striking out eight and walking one. Rookie manager Jayce Tingler pulled Lamet after he allowed a leadoff double in the sixth to Starling Marte on his 80th pitch. Myers’ three-run homer in the fourth was the Padres’ first of the year and highlighted a rough second time through the order for Arizona left-hander Robbie Ray.

[AZ Central] Diamondbacks’ bats remain silent in 2nd-straight loss to Padres – Edward Olivares, making his major league debut, doubled for his first hit. Ray struck out Austin Hedges but walked Trent Grisham and was lifted for Stefan Crighton, who got the final out of the inning. Ray (0-1) allowed three runs and four hits, struck out seven and walked three. He threw 97 pitches in 3 2/3 innings. Machado hit a two-run homer to left-center off Hector Rondón in the seventh.

[MLB Trade Rumors] Red Sox Select Zack Godley – The Red Sox announced they have selected right-hander Zack Godley to their 40-man and active rosters. Fellow right-hander Dylan Covey has been optioned to their minor league training site to clear active roster space. Their 40-man roster now sits at 39 players. Boston signed Godley to a minor-league deal shortly after he was released by the Tigers at the outset of Summer Camp. Godley didn’t immediately command a 40-man roster spot, but it always seemed likely he’d get a look on an uncertain pitching staff. The 30-year-old turned in a pair of productive seasons as a starter with the 2017-18 Diamondbacks. Combined, he tossed 333.1 innings of 4.10 ERA ball with a solid combination of strikeouts (24.7%), walks (9.4%) and groundballs (51.6%). The wheels fell off completely in 2019. Between Arizona and Toronto, Godley turned in a 5.97 ERA in 33 appearances (9 starts) with dramatic declines in his strikeouts and grounders. Along the way, Godley’s lost some velocity on both his cutter and sinker.

[CBS Sports] Rockies’ Daniel Bard hits 99 mph, picks up win in return to MLB after a seven-year absence – In the fifth inning of the Rockies’ eventual Saturday win over the Rangers (COL 3, TEX 2), reliever Daniel Bard took the mound for Colorado. That’s notable because in doing so Bard appeared in a major league game for the first time since April 27, 2013 — i.e., more than seven years ago, or to be exact 2,646 days ago. Bard, a first-round draft choice out of the University of North Carolina in 2006, debuted as a hard-throwing reliever with the Red Sox in 2009 and was generally effective across three seasons. The Red Sox attempted to transition him to a starting role, but around that time Bard almost completely lost his ability to throw strikes. Following the 2012 season in which he pitched to a 6.22 ERA and walked 43 batters in 59 1/3 innings, Bard’s major league career appeared to be in danger.

[Sports Illustrated] Giancarlo Stanton Continues to Test Limits of Statcast, Launches 483-Foot Home Run – Giancarlo Stanton is on pace for 60 home runs this season. Two nights after a booming two-run blast in his first at-bat of the 2020 season, the Yankees’ slugger one-upped himself with a blast that traveled further and faster. On a 3-0 count in the fourth frame, Nationals’ right-hander Erick Fedde — starting in the place of Stephen Strasburg — grooved a four-seam fastball down the middle of the plate. Stanton evidently had the green light and got every bit of the 92-mph meatball. New York’s designated hitter unloaded on a 483-foot missile, nearly clearing the left field bleachers at Nationals Park. The ball was clocked by Statcast off his bat at 121.3 mph — that’s the second-fastest homer hit in the Statcast era, dating back to 2015.