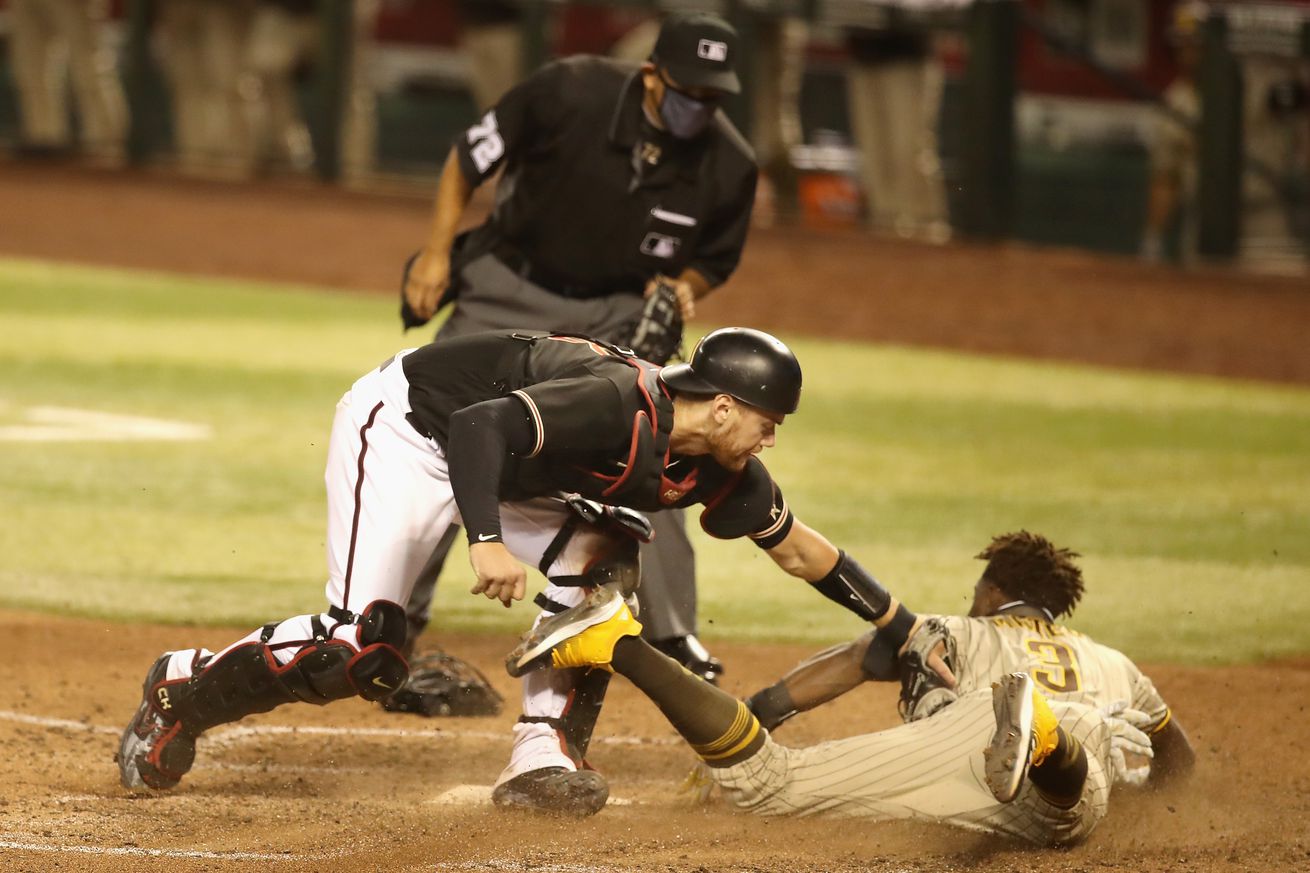 The final play of last night’s game was so beautiful, you’re going to see it used as a cover photo again.

[D’backs.com] Kelly joins offensive surge, makes key tag – It took them a little while, but 21 games into this 2020 season, the D-backs look like they are starting to put things together. Their 7-6 win over the Padres on Saturday night at Chase Field was their fourth in their last five games as they climbed to just one game under .500. There were plenty of positives for the D-backs — a great relay between center fielder Starling Marte and second baseman Ketel Marte that cut down the would-be tying run at the plate for the final out of the game, a nice outing from starting pitcher Alex Young and another big night from the offense. The D-backs have scored at least five runs in six straight games. There’s a lot to sift through, but the one thing that might mean the most to the D-backs going forward is that catcher Carson Kelly is starting to heat up at the plate.

[Arizona Sports] Alex Young produces solid outing in first start of season – Aside from a Fernando Tatis Jr. home run in the first inning, Arizona Diamondbacks left-handed pitcher Alex Young put up a solid outing in his first start of the 2020 season. Young, starting in place of the injured Madison Bumgarner, finished the outing with 4.1 innings, four hits and one run. Manager Torey Lovullo let Young pitch to Trent Grisham to start the fifth inning before replacing him with Kevin Ginkel. Young finished the day with 63 pitches, 42 of them strikes. He also laid down strikes on 15 of the 18 first pitches. Lovullo said ahead of Young’s start that he expected Young to throw between 70 and 75 pitches and the plan would be to monitor how he progressed toward that mark and how he handled those pitches. He said he didn’t want to put the 26-year-old in a bad situation.

[AZ Central] Diamondbacks hold off late Padres rally, pull within 1 game of .500 – As Jorge Mateo hit second base in the ninth inning on Saturday night, Diamondbacks shortstop Nick Ahmed turned toward the outfield, briefly assessed the variables — the placement of the ball, Mateo’s blazing speed – and came to a conclusion. “I was like, ‘Man, this guy might go home,’” Ahmed recalled later. Ahmed yelled to second baseman Ketel Marte that Mateo might be going; Marte took the relay from center fielder Starling Marte, turned and fired a strike to home plate; and Mateo was called out on a play so close that replay appeared inconclusive. The play brought an end to what had been a frightening sequence for the Diamondbacks. They came within inches of blowing a four-run, ninth-inning lead. Instead, they held on for a 7-6 victory over the San Diego Padres, a win that pulls them within a game of the .500 mark.

[Washington Post] Baseball is honoring the Negro Leagues. It needs to explain why they existed. – Baseball had a chance. It was 1869. The Pythian Base Ball Club of Philadelphia played the Philadelphia Olympics. Not a well-pitched game: Olympics 44, Pythian 23. It was noteworthy, however, because Pythian were black and the Olympics were white, and against each other, they made for baseball’s first recorded interracial game. “Two decades later, the ‘gentlemen’s agreement’ of 1887 between white professional baseball teams excluded all black players from participation, leading to the eventual creation of the Negro Leagues,” wrote Stephen Segal in the journal “The Historian” in 2012. “Rather than continuing racial progress after 1869, blacks went backwards in terms of equality in organized baseball. The story of the Pythian Club exemplifies yet another example of how African American dreams of equality were shattered and unfulfilled during the period of Reconstruction.” But you won’t hear that explained on Sunday as baseball marks the centennial birth of the Negro Leagues. Instead, Major League Baseball will cover it up with a 100th anniversary logo patch on players’ uniforms in Sunday’s games. Pat itself on the back for joining the players’ union in making a $1 million contribution to the Negro Leagues Baseball Museum in Kansas City. Have some virtual conversations in pandemic-empty stadiums about some of the black men who made for great tales over a 60-year span playing just among themselves.

[MLB Trade Rumors] Reds’ Latest Round Of COVID-19 Testing Reportedly Comes Back Negative – The latest round of coronavirus testing for the Reds has come back negative, tweets MLB Network’s Jon Heyman. After one Cincinnati player was revealed Friday to have tested positive for COVID-19, the remainder of their weekend series with the Pirates was postponed. Fortunately, there’s no indication at this point the virus has progressed beyond that player. There is no specific timetable on the Reds’ return to action, although Heyman notes that today’s clean round of testing sets them up for a potential resumption next week. MLB is understandably exercising plenty of caution in trying to forestall a possible large-scale outbreak. We’ve seen already in the cases of the Marlins and Cardinals how quickly the virus is capable of decimating a clubhouse.

[MLB.com] Trout bangs 9th homer, ties for MLB lead – With a towering two-run homer to dead center in the first inning off Dodgers right-hander Walker Buehler on Saturday at Angel Stadium, Angels superstar Mike Trout is now tied for the Major League lead in homers with nine, joining the Yankees’ Aaron Judge and the Padres’ Fernando Tatis Jr. atop the leaderboard. Trout also brought home the go-ahead run with an RBI groundout as part of a two-run fifth inning and swiped second base, giving him 35 career games with a homer and a stolen base. But it came in a 6-5 loss to the Dodgers in 10 innings in the second game of the Freeway Series. It dropped the Angels to 7-14, which is tied for the worst 21-game start in franchise history.

[ESPN] Cardinals’ comeback from COVID-19 starts with MLB sweep – It’s the stuff they might write a movie about someday as the St. Louis Cardinals returned to a Major League Baseball field in dramatic fashion Saturday, sweeping the Chicago White Sox in a doubleheader, after the team had missed the past 19 days of competition because of a coronavirus outbreak among its players and staff. “Isn’t it crazy what we just did?” outfielder Tyler O’Neill said after hitting a home run in the sweep. “I think the craziest thing is not getting a text message this morning saying we’re postponed. Actually waking up for a ballgame, and luckily we got two.”