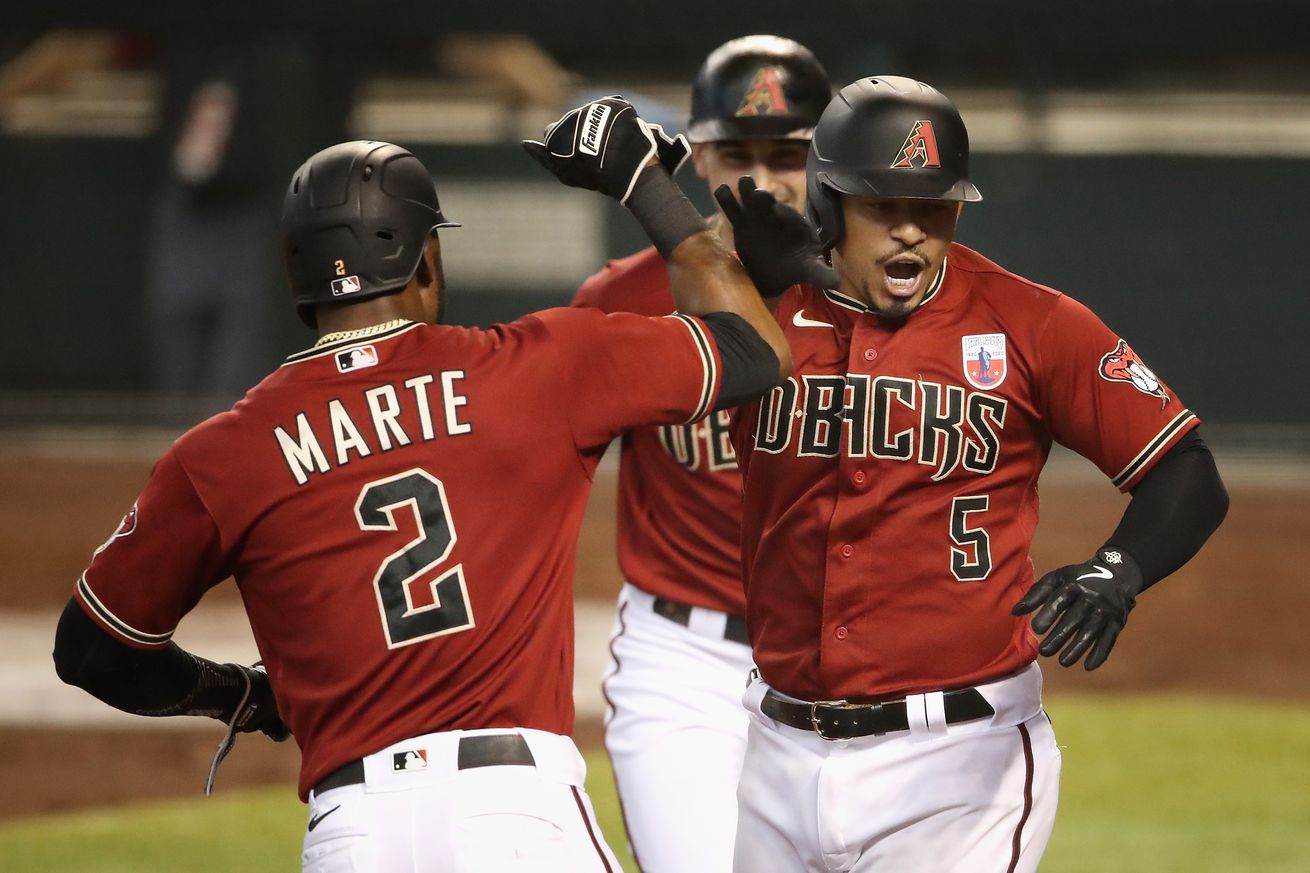 The first sweep of the season for Arizona got them back up to .500

[Arizona Sports] D-backs sweep Padres behind Ray’s best start of 2020 – Robbie Ray needed a game like this. The 28-year old lefty hasn’t been all that impressive since 2017, when he went 15-5 and posted a 2.89 ERA. But he hadn’t really been terrible either – moreso just average. Until this season. Ray carried a 10.59 ERA into Sunday’s contest with San Diego. And then proceeded to throw five no-hit innings against one of the better lineups in baseball, as the Arizona Diamondbacks completed the sweep of the Padres with a 5-4 win. Of course, baseball games aren’t five innings long. Not even in 2020. And things got interesting in the later innings of this one. The bullpen didn’t just lose Ray’s no-hitter, it quickly gave up four runs as well.

[dbacks.com] Escobar, Ray break out as D-backs sweep – Ray tweaked his delivery during the offseason, going above his head with his hands, shortening his step back and not having his arm swing as long in his delivery. After struggling at the start of the season, Ray added another change — a glove tap during the delivery. On Sunday, he scrapped all but the shortened arm swing and had mixed results. On the plus side, he struck out six, including getting Jorge Mateo swinging at a slider for the first out of the third inning to record the 1,000th of his career. Ray reached the mark in fewer games than any left-hander in baseball history since 1913, outside of Hall of Famer Randy Johnson

[The Athletic] Escobar and Ray get back to normal, and Arizona gets back to .500
When Lovullo saw Escobar take pitches at which he previously flailed, it was a sign that the third baseman was getting more comfortable. A less antsy hitter takes those pitches for a free base. “What I feel like should be shooting fish in a barrel, teams are going to keep working him the same way as long as he keeps offering at balls up, out, over and down in the zone,” Lovullo said. “He remedied that yesterday.” Said Escobar: “Right now, I’m focused more on staying back and trusting my hands and staying in the middle. Yesterday and today, I feel super because I stayed back to the ball.”

[AZ Central] Lift off: Arizona Diamondbacks win fourth in a row, sweep Padres
“I feel so different,” Escobar said. “I feel like I’m back.” Escobar’s blast off Padres reliever Emilio Pagan turned a 4-2 deficit into what eventually became a 5-4 victory for the Diamondbacks, who completed a three-game sweep of the San Diego Padres with a second consecutive one-run win at Chase Field. The emotion of the blast could be felt throughout the ballpark – well, as much as such a thing is possible in an empty stadium. Escobar pumped a fist as he rounded first base. Bench coach Luis Urueta landed a celebratory smack on assistant hitting coach Eric Hinske’s chest. Teammates beamed – and Escobar did the same a moment later after returning to the dugout.

[mlb.com] Traded twice, Gallen looks like a keeper – D-backs right-hander Zac Gallen was a third-round Draft pick in 2016, has been a member of three franchises already and never earned a spot on any organization’s preseason top-10 prospects list. But since he arrived in the Majors in June 2019, few starting pitchers have been better… Since Gallen debuted, only seven starters have recorded a better ERA, and his 29% strikeout rate is tied for 19th best among the 104 pitchers to make at least 15 starts in that span.

[SI] Oakland A’s look like 2020’s team of destiny – Sports Illustrated – The A’s haven’t won a playoff series since 2006, when they were swept in the ALCS by Detroit. Since then, they’ve lost twice in Game 5 of the ALDS and three more times in the wild-card game, including last season’s home defeat to the Tampa Bay Rays and a thrashing at Yankee Stadium the year before that… But this A’s edition might have the right, well-balanced formula to exorcise the franchise’s playoff demons.

[MyNorthWest.com] Mariners’ Dee Gordon has an idea to grow MLB — an all-Black WBC team – Beyond the Classic, perhaps a tour. Gordon believes that showcasing an entire team featuring some of the best players in the game playing a different style of baseball, taking a page from the Negro Leagues, would go a long way in promoting the game. “They beat ’em with pizzazz, they beat ’em with real, straight-up baseball,” he said of the Negro Leagues barnstorming teams. “If I could go back I think I would have loved to have played with them. I think my personality, my game, definitely would have fit.”

[NY Post] The most tragic pitch in MLB history, 100 years later – Through the end of the 2019 season, there were 220,855 games played in the history of major league baseball. Hitters have come to the plate 15,106,184 times, and 111,521 hitters who were hit with pitched balls — some of them striking at 95 mph or higher. There were untold thousands of line drives struck, some hitting skulls and temples and throats at upwards of 110 mph. There has been but one fatality. In a sense, that is baseball’s greatest miracle.

And there I was, thinking Maleficent: Mistress of Evil would be the prettiest picture I saw in all of 2020. There’s a new champion, and whoever assembled the look of this one should have been honoured at the Oscars. Shot in Barcelona and the Canary Islands, it beats Maleficent by almost entirely avoiding CGI, in lieu of stunning locations such as the former residence of sculptor Xavier Corberó: “a mazelike estate constructed from cement that features nine connected structures and 300 arches.” That quote comes from a feature in Architecture Digest, which is not something every film gets, shall we say. And it deserves one, for the entirety of this is a 95-minute coffee-table book. Even when the plot stumbles, you can wallow in a remarkable visual style, achieved for the relative pittance of $10 million.

That plot concerns Uma (Roberts), who has just refused the hand in marriage of the young man chosen by her family. She is sent off to the titular establishment, on a remote island, to be “re-educated” into a more pliable form, under the guidance of The Duchess (Jovovich). Uma meets others going through the same treatment for various reasons, but plots to escape, with the help of the one she truly loves. Only for this to be derailed when the true nature of the “re-education” is revealed, explaining why Paradise Hills has a 100% success rate with its patients, despite a very low-key approach, mostly consisting of yoga. Yet, it turns out to be an method which can perhaps be leveraged against those who seek to control Uma.

As a modern-day fairy-tale, it works quite nicely, driven particularly by the visual style which feels like the dream of a mad interior designer. However, it’s not as clever as it thinks it is, and occasionally descends into the painfully obvious, such as The Duchess clipping thorns off roses. ‘Cos the roses represent the young women, being shorn of their individuality and essence, y’see? Yeah, I rolled my eyes a bit at that. You also wonder why they bother with flashy stuff like cranking Uma up to the roof on a carousel pony, in order to show her holograms of her intended. It seems entirely unnecessary, given the… considerably more physical, shall we say, nature of Paradise Hills’ true solution.

But it’s fun to watch Jovovich in a role which doesn’t require her to kick ass – except, perhaps of the psychological kind. For she still exudes menace, even when being extremely polite, or perhaps due to this. Managing to make “You’re just a prickly little pear” into a dire threat is no small feat. While Roberts is decent enough, the rest of the supporting cast of inmates (González, Macdonald and the ever-clunkily named Awkwafina) seem largely redundant. We’re never given much reason to care about their characters, and I found the film achieved greater impact when it stayed focused on Uma. But given the beauty on display, I’m largely prepared to forgive its other flaws.