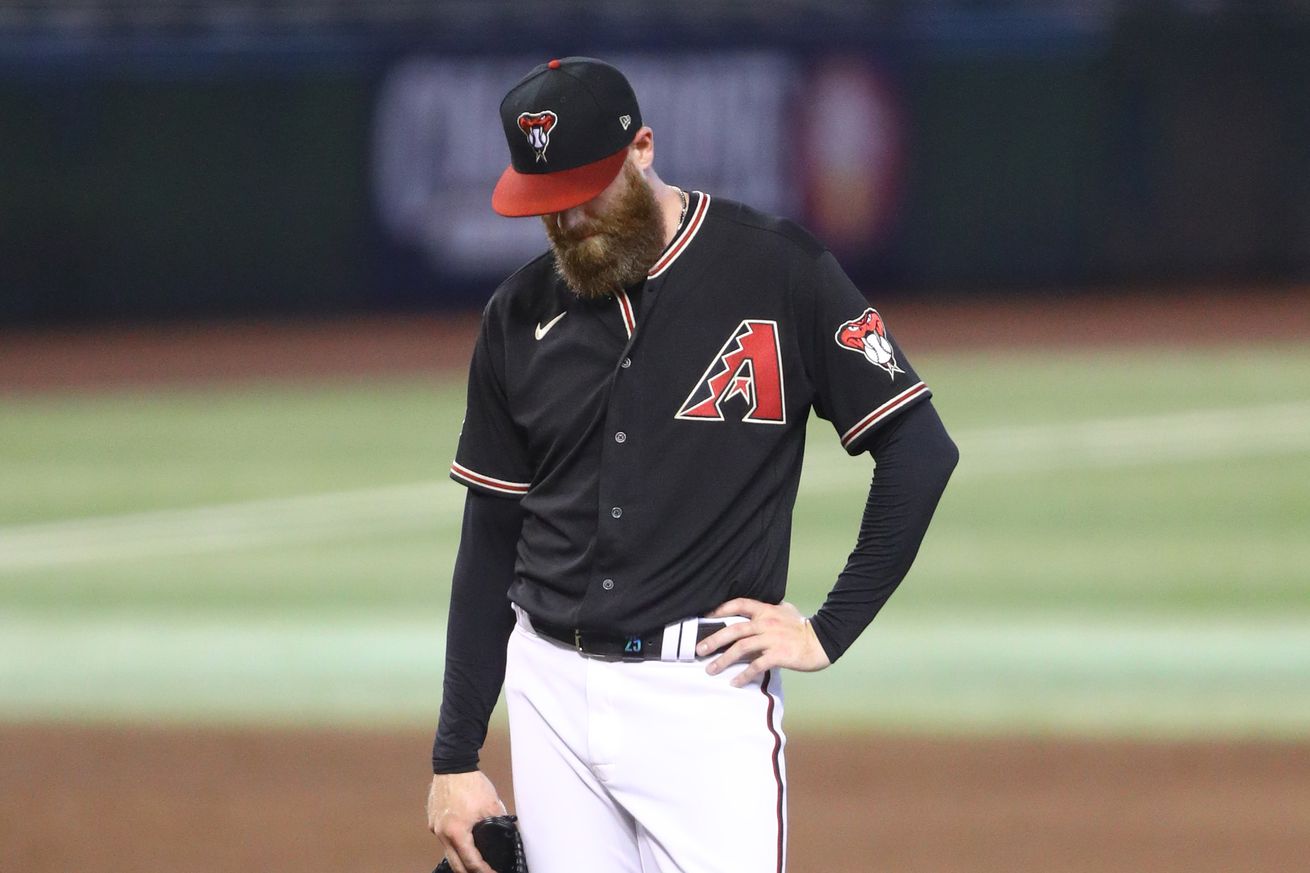 Cloudy skies ahead for fans of the Arizona Diamondbacks. In my opinion, this team has a colossal climb back to the top of the division for the foreseeable future.

Mike Hazen made a slurry of trades before the deadline yesterday in moving Archie Bradley, Robbie Ray, Andrew Chafin, and Starling Marte. The transactions were difficult for many Diamondbacks fans to swallow. For me, it wasn’t as much about who was traded but why they were traded. To see this as anything less than a salary dump would be naive. In the COVID_19 landscape with suppressed revenues, ownership will look to squeeze every dime they can out of this ball club for the foreseeable future. This comes at a time when the Los Angeles Dodgers are light years ahead of every team in the division and the San Diego Padres continue to improve on an already strong system. In my opinion, we might want to prepare for a difficult start to the decade for this franchise.

[D’backs.com] D-backs trade Ray, Bradley, Starling, Chafin – Thanks to a busy Trade Deadline, the D-backs will look quite a bit different when they reassemble Tuesday night to open a three-game series with the Dodgers in Los Angeles. Monday may have been a day off for the team but general manager Mike Hazen was certainly busy as he looks to reconfigure a team that for the last couple of seasons has been good, but just not good enough to get over the hump. The D-backs are 1-10 in their last 11 games, and at 14-21 they are in last place in the National League West. While Monday’s deals may further hurt the D-backs’ postseason chances this year, Hazen is counting on a quick rebound for 2021. “I commiserate and empathize with the fans for 2020,” Hazen said. “We started this season with every expectation of making the playoffs. At this moment in time we are not projected to do so and that is very disappointing. I would caution on the outlook for 2021. I think we’re situated in a fairly strong position moving into the offseason.”

[AZ Central] ‘No excuses’: Struggling Diamondbacks shed veterans, payroll at deadline – With his team suffering through a severely disappointing season, Diamondbacks General Manager Mike Hazen shipped off four veteran players prior to Monday afternoon’s trade deadline, saving the organization more than $3 million while acquiring at least a half-dozen young players he hopes will strengthen the club in years to come. Center fielder Starling Marte (traded to the Miami Marlins), closer Archie Bradley (Cincinnati Reds), left-hander Robbie Ray (Toronto Blue Jays) and left-handed reliever Andrew Chafin (Chicago Cubs) were sent out in separate deals as the Diamondbacks sat in last place in the National League West, their record at 14-21. “There are moments in time when you can’t go chasing something that isn’t there and for this season it hasn’t been there,” Hazen said, his team having lost 10 of its past 11 games. “I feel like pivoting at this moment in time is what’s most appropriate.”

[Arizona Sports] D-backs GM Mike Hazen doesn’t regret not trading Robbie Ray earlier – Robbie Ray’s trade value undeniably isn’t what it once was, and so it might hurt in retrospect that the Arizona Diamondbacks had quite the market available for him last year before sending him to Toronto on Monday for left-handed reliever Travis Bergen. Both at the trade deadline and in the offseason, speculation for Ray being dealt tied to the likelihood of a big-money deal coming for him as a free agent after the 2020 season. There was plenty of reported interest, but the D-backs stood strong, looking to contend in 2020. That thinking is why general manager Mike Hazen isn’t going to beat himself up too much on the decision. “On this one, no, probably not,” Hazen said on if he will look back on it as a mistake. “And for the reason being that we went pretty aggressive at 2020, and a big piece to that strategic aggressiveness was top of the rotation starting pitching and he was one of those guys. “I can’t regret it, because I still agree with the strategy given what we were trying to execute in 2020. Now, I can play hindsight in 2020 and criticize myself, which I probably will quite a bit. But this one was a hard one because the strategic choice we were making, given the dynamic of what we were doing with our team, I’d probably make that decision again.”

[The Athletic] Why did Arizona sell? Because Mike Hazen didn’t want to run it back in 2021 – Depending on how much cash the Cubs ultimately receive, Hazen saved at least $3.3 million with the four trades, raising the eyes of people across the game who figured the general manager must have been under a mandate to clear salary. Baseball operations departments across the sport have been slammed by the pandemic, with many teams significantly cutting staff as they lose out on gate revenue. Though the Diamondbacks have not announced any such cuts, rival evaluators expect significant changes to come to Arizona’s scouting and player development departments. But Hazen insisted money was not the driving factor behind his flurry of deals, even quashing a report that he’d informed teams interested in Marte to get him now because the Diamondbacks would be declining his reasonably priced option for next season to save the cash.

[MLB Trade Rumors] Rangers Anticipate Payroll Cut This Offseason – The 12-21 Rangers shipped off a few pieces today, but they didn’t find an offer to their liking on Lance Lynn or Joey Gallo. Given comments made by general manager Jon Daniels, though, it seems probable they’ll revisit talks on those players this offseason. “We were open to the idea of acquiring younger players that fit more long-term,” said Daniels, who admitted that 2022 and beyond is “probably the more likely window for us” (via Jeff Wilson of the Fort Worth Star-Telegram). Adding to the challenge of competing in 2021, it seems, are forthcoming payroll cuts. “I’m not certain what the overall budget will be. It will be down from where it was this year, but I’m not sure exactly where,” Daniels said, per Wilson. As the GM pointed out, that’ll likely be true of a lot of teams in the wake of massive revenue losses arising out of the pandemic. Patching all the team’s holes this offseason while navigating budget cuts may be an impossible task.

[MLB.com] ‘Pretty amazing’: MLB execs on Deadline – Executives were torn on the D-backs’ decision to sell big on Monday, which resulted in the trade of Starling Marte to the Marlins, Archie Bradley to the Reds, Robbie Ray to the Blue Jays and Andrew Chafin to the Cubs for a total haul of seven players. “Maybe the biggest surprise was watching all of the guys come off the board in Arizona,” an NL executive said. “I didn’t see them moving all of those guys.” Less than two weeks ago, the D-backs were 13-11, good for the fifth-best record in the NL. A 1-10 skid left them at 14-21 at the Trade Deadline, so while Arizona was just 2 1/2 games out of a playoff spot, GM Mike Hazen decided to collect pieces for the future despite having Marte and Bradley under control for another year. “It’s been a tough couple weeks for them, which is like a tough month and a half in regular baseball time,” an NL executive said. “They were the anti-Padres,” a second NL exec said. “It was similar to Cleveland; they acquired a lot of decent pieces. Whether any of them become regulars or two- to three-win players is an open question. It was likely the right strategy for a club with limited financial resources. They need to fill as many Major League holes as cheaply as possible over the next few years.”

[ESPN] 2021 MLB draft will move to July, be held in Atlanta during All-Star events – The 2021 MLB draft will move from June to July 11-13 and will be held in Atlanta as part of the All-Star Game festivities, according to a memo obtained by ESPN that MLB sent to clubs Monday about changes to the draft. The draft has been held in early to mid-June for decades. A number of benefits for clubs and the league arise from moving the draft. Holding it at the All-Star Game — in conjunction with the Futures Game and after the College World Series — allows the league to own the marketing and promotion of all of the young stars, likely having many of them on hand when the league gathers for the Midsummer Classic. In addition, a bigger gap between the end of most amateur seasons and the draft allows MLB to create more programming, such as high school and college showcases, games, and leagues, in addition to a medical combine, all geared toward getting information to clubs before they make their selections. It hasn’t been finalized, but the memo says MLB expects the 2021 draft to be between 20 and 30 rounds. The 2020 draft was just five rounds, breaking a long-standing trend of 40-round drafts. In the March agreement, it was decided 20 rounds was the minimum length for the 2021 draft.