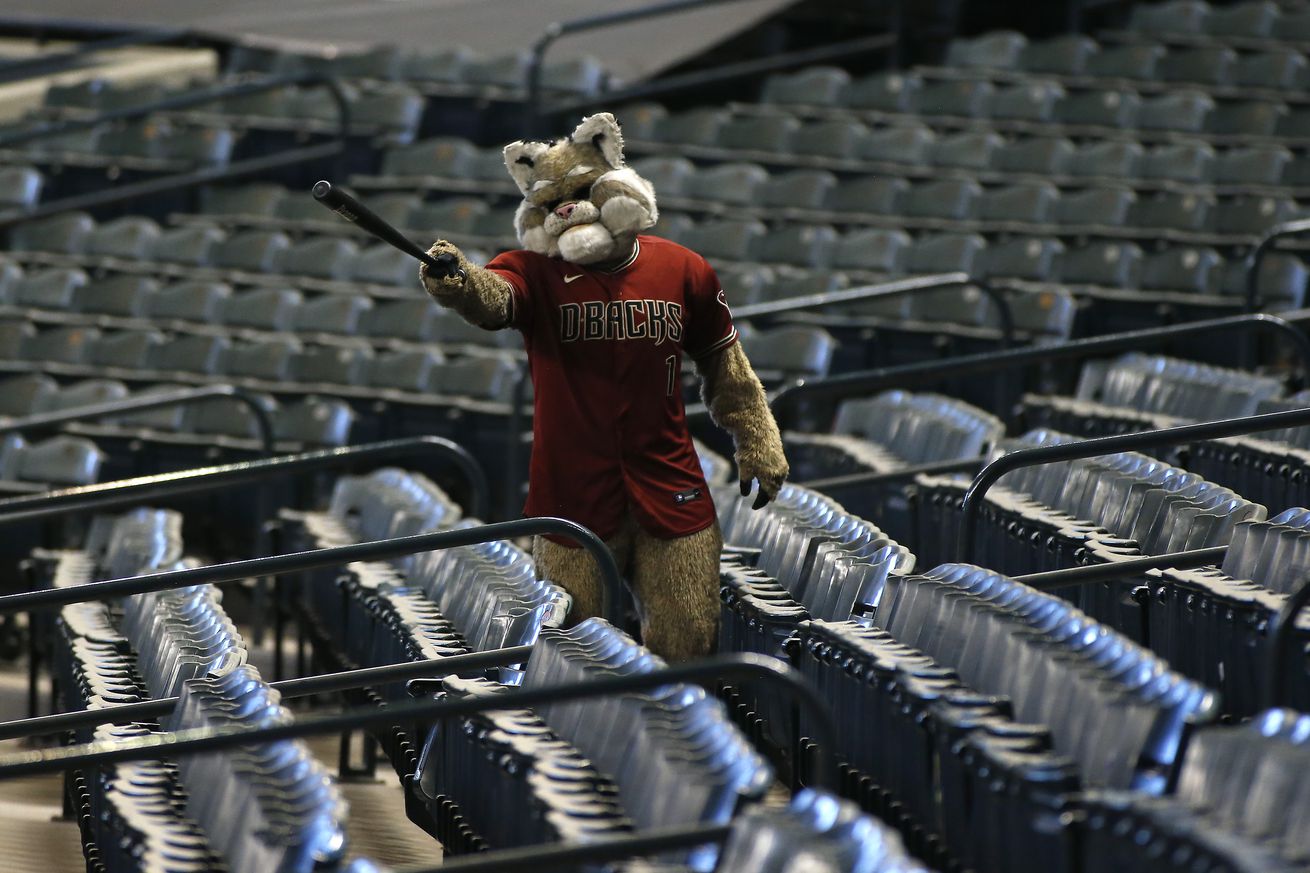 The 16 team field for the post-season is set. [Diamondbacks sold separately]

[AZ Central] Madison Bumgarner wins season finale in Diamondbacks’ win over Rockies – Diamondbacks left-hander Madison Bumgarner returned to the dugout between innings on Sunday and offered a fist bump to pitching coach Matt Herges. “He gave me a, ‘Hey, did you see that?’” Herges said. “I’m like, ‘The 91?’ He’s like, ‘Yeah, absolutely.’” In addition to touching 91 mph for the first time this season, Bumgarner on Sunday breezed through five scoreless innings in a 11-3 win over the Colorado Rockies. It was his second consecutive sharp performance to end the season, and it undoubtedly gave the Diamondbacks some measure of relief as they head into the winter.

[Arizona Sports] Bumgarner dominant as D-backs finish 2020 season with win over Rockies – Sunday’s game was about as perfect as it could be, problem is games like Sunday were few and far between in 2020 for the D-backs en route to a last-place finish in the National League West with a record of 25-35. “I’m battling through some frustration right now, I’m not going to lie,” D-backs manager Torey Lovullo said in a Zoom call with the media after the game. “We should not be going home today, that’s my mindset and I think everybody in that room feels the same way.”

[dbacks.com] Bumgarner’s efforts end season on high note – “Pissed is probably a good word,” D-backs first baseman Christian Walker said when asked to sum up how he felt about the season. “Not disappointed. That’s not the right word, but definitely feel like we left something on the table. But, you know, it’s not about how you start, it’s how you finish, and [having some] perspective here, you know, we played some good baseball at the end.”

[theathletic.com] Bumgarner’s run to end the year: ‘He has it back’ – The Arizona season ends with Madison Bumgarner on the upswing allows them to exhale a little bit. “I’m going to sleep better at night,” Herges said, “let’s put it that way.” Bumgarner did not speak to the media following his Sunday start because, according to Herges, he has dealt with a wisdom tooth infection that requires immediate attention. Herges said the lefty has dealt with it for about three days and is in a significant amount of pain, but put off addressing it until after he could make his final start. (“I asked him when he was warming up, ‘Are you on drugs right now?’” Herges said. “He looked at me and laughed and was like, ‘No, but I should be.’”) But Bumgarner surely was relieved to see his velocity gains.

[AZ Central] Torey Lovullo tight-lipped on status of Diamondbacks’ coaches – “I haven’t given myself any chance to think about that,” he said. “I want to give that the proper amount of time.” Lovullo was then asked if that meant potential changes would have to wait at least a few days, but he again would not make any assurances. “No, I’m not sure,” he said. “… I’m going to dig in and have conversations with these guys as a staff and try to figure out some of the things we need to do to improve.”

[USA Today] MLB’s expanded playoff field is set. A quick look at all 8 wild-card series matchups – The match ups for the three-game wild-card round have been set. In the National League, the Brewers face the Dodgers, while the Reds go to Atlanta for an intriguing contest. The Cardinals are in San Diego, while the Marlins, who have never lost a post-season series, will take on the Cubs. Where’s Steve Bartman when you need him? There are games in the American League as well, I guess…

[mlb.com] Here are the 2020 season’s league leaders – NL ERA — Trevor Bauer (CIN): 1.73. Bieber’s former teammate and good friend sealed the NL ERA title with a strong one-run, 12-strikeout performance against the Brewers on Wednesday. The cerebral righty is the Reds’ first league ERA champ since Ed Heusser (aka “The Wild Elk of the Wasatch”) way back in 1944.

[ESPN] MLB playoffs 2020: Why this could be the wildest postseason … ever – It will be a Major League Baseball postseason like we’ve never seen before: 16 teams, no fans, played in neutral-site ballparks after the first round of the MLB playoffs with a World Series at a new stadium that most players have never seen hosted by a franchise that has never won a championship. As a friend of mine who lives in Chicago told me about one potential World Series matchup, “If it’s Cubs-White Sox played in suburban Dallas, I would vomit.”

Plotwise, this plays like a SyFy original movie, and not a particularly imaginative one at that. Two princes of a mystical realm are sparring in a field, when a portal opens, sucking one of them off. Hmm. I should probably rephrase that. Anyway, the survivor, Mairok (Phillips) is tasked by his father, King Golan Mor (Jones) with recovering four stones which, when combined, form a magical suit of armour. This cannot be allowed to fail into the hands of the evil Shadow (Bertoli), who wants it for the usual evil purposes, e.g. to do evil. Off heads Mairok on his quest, with the help of Amazon queen and stone guardian Lantris (Mischiati), towards the inevitable final battle with Shadow. Will there be noble sacrifice from a supporting character? Will good triumph over evil? Will there be copious quantities of really spiky shoulder-pads?

If you’ve seen enough of this kind of low-rent fantasy film – and, in this context, “enough” is likely any more than three – you will already know the answers to those questions. This story is nothing if not staggeringly predictable, playing out with all the creative effort of a remaindered Playstation game. The limited resources are also painfully apparent in the complete lack of any crowd scenes, which might help establish this as a living, breathing world. Outside of a heavily CGI’d opening battle sequence, I don’t think we ever see more than four people at once – that would be Lantris and the three women who appear to comprise the entire population of her realm.

Directorial credit on-screen goes to “2 crazy guys”, although the IMDb lists only De Palo. He has a long career, going back to 2005, as a digital effects artist on the likes of Kingsman: The Secret Service, and this does likely help. Presuming the budget elsewhere was as low as the tiny cast implies, the results are solid enough, especially in the area of landscapes and backdrops. The makers also benefit from having apparently been given permission to use a slew of castles, ruins and other historic landmarks in Italy’s Piedmont and Valle d’Aosta regions. These provide the movie with much-needed production value, while promoting the area as an attractive destination for tourists. Just watch out for those pesky portals of suck.

None of the above is enough to save this, as it rumbles along at a low level of energy, with few scenes of note. The fight sequences are particularly underwhelming in this regard, being slow and unthreatening, of the “2-3-SWING, 2-3-BLOCK” variety. The lead actor looks heroic enough, yet recites his lines with no more than the same sense of duty Prince Mairok went on his mission. Lantris fares slightly better, even if it looks like she came to set straight from her shift at a Kiss-themed restaurant. Her shoulder-pads, however, should have a long and successful career in front of them, and I look forward to seeing what they might do in future.

This review previously appeared on my movie site, FilmBlitz.org.