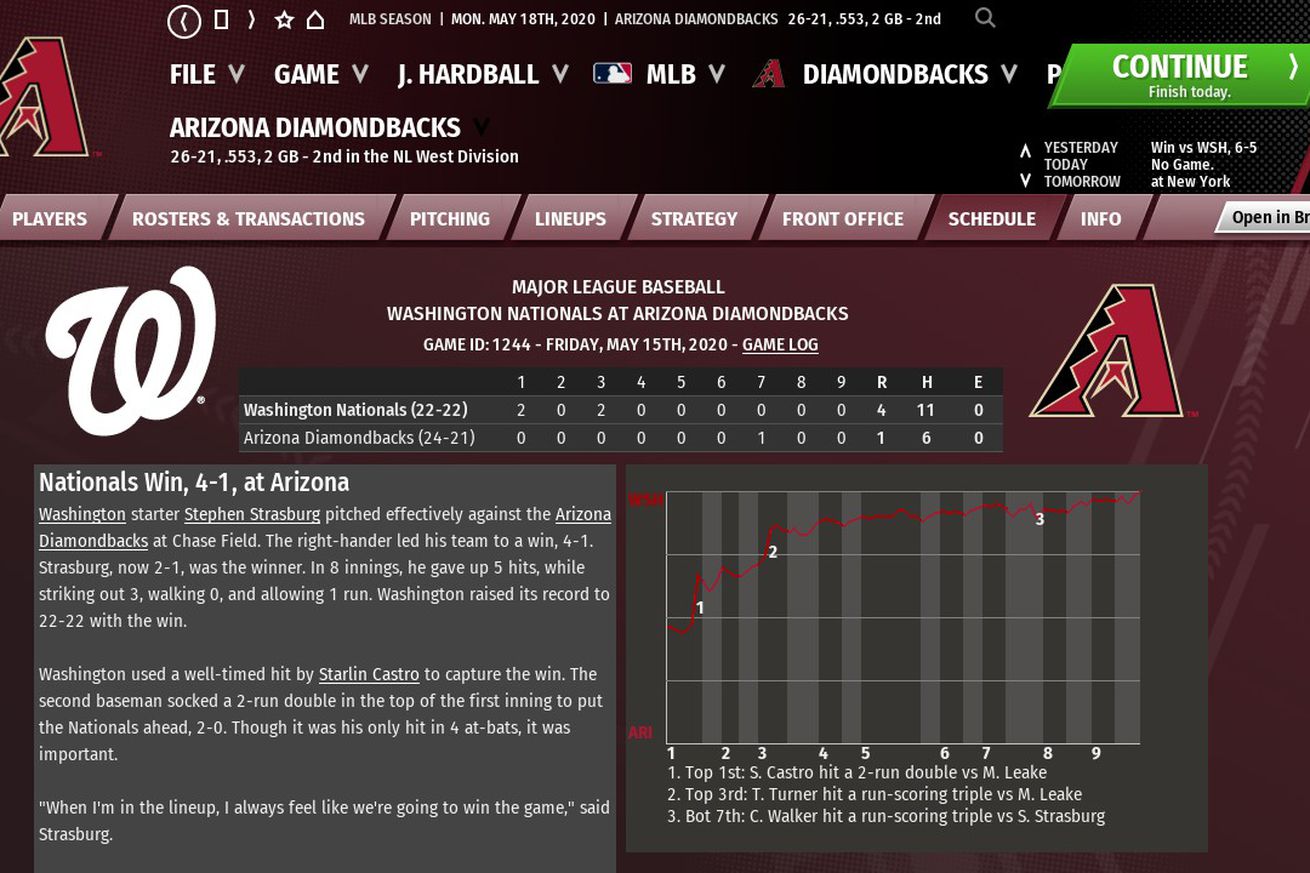 If there is one silver lining to Mike Leake’s continued struggles, it is that he had this particular rough outing on a evening during which Stephen Strasburg was putting on a clinic. For the second time in three games, the Diamondbacks ran into a pitching buzz saw. Though Strasburg only recorded three strikeouts in his eight innings of work, he also did not walk anyone. He only allowed five hits in total, none of them hit particularly hard.

The Nationals put a quick two-spot on Leake in the first inning. As has become something of a pattern with Leake, he was not hit especially hard, he simply could not miss bats and watched ground balls squirt through holes in the infield. After two quick outs. he surrendered a pair of singles to Juan Soto and Eric Thames. Both came home on a groundball double that made it by a diving Ildemaro Vargas at second. The Nationals scored two more in the third inning on a single by Adam Eaton, a triple by Trea Turner that was all about his speed, a walk, and then a GIDP. The four runs through three innings were enough for Leake to be pulled from the game when his spot in the lineup came up in the bottom of the third. Kevin Cron pinch-hit for Leake, becoming one of Strasburg’s paltry three strikeout victims. The Diamondbacks’ bullpen was outstanding. They held the Nationals scoreless for the final six innings, allowing only six hits and a walk while striking out five.

The only scoring by the Diamondbacks came in the seventh inning. Ildemaro Vargas started off the frame with one of only two hard-hit balls off of Strasburg on the afternoon. The second baseman hit a hot shot grounder between first and second for a single. Two batters later, he was erased when Eduardo Ecobar hit into a fielder’s choice for the second out of the inning. Christian Walker followed that up with a soft liner into left center which was ruled a triple. The reality is, Victor Robles waited back a bit on a carom off the wall that never arrived. The ball died at the base of the wall, forcing Robles to go retrieve it, allowing Walker to take third. That scored Escobar and brought up Kole Calhoun. Calhoun then tagged Strasburg for the second hard-hit ball of the game for the Diamondbacks, a 108.1 mph grounder down the first base line which Eric Thames somehow managed to nab with a diving stop away from the infield into foul territory.

While it is easy to point the finger at Mike Leake struggling again for the Diamondbacks losing this game, the reality is, no one should be expecting the team to throw a shutout. Yet, that’s precisely the only way the Diamondbacks were winning this game. Despite Strasburg’s lack of sexy strikeout numbers which often accompany his outings, he put on an absolute clinic, getting weak contact after weak contact on his filthy curve and his change.

Unsurprisingly, the player of the game was Stephen Strasburg. Had his spot in the lineup not come to the plate in the top of the ninth, it is likely Virtual Dave Martinez might have allowed him to go back out to pitch the complete game.

The same two teams meet up again tomorrow for game three of this four-game series. Robby Ray will take the mound for the Diamondbacks while the Nationals will once again use Roenis Elias in the role of opener.

The loss slips the Diamondbacks one game behind the Giants in the standings, third place in the NL West. They are also tied with the suddenly good San Diego Padres.