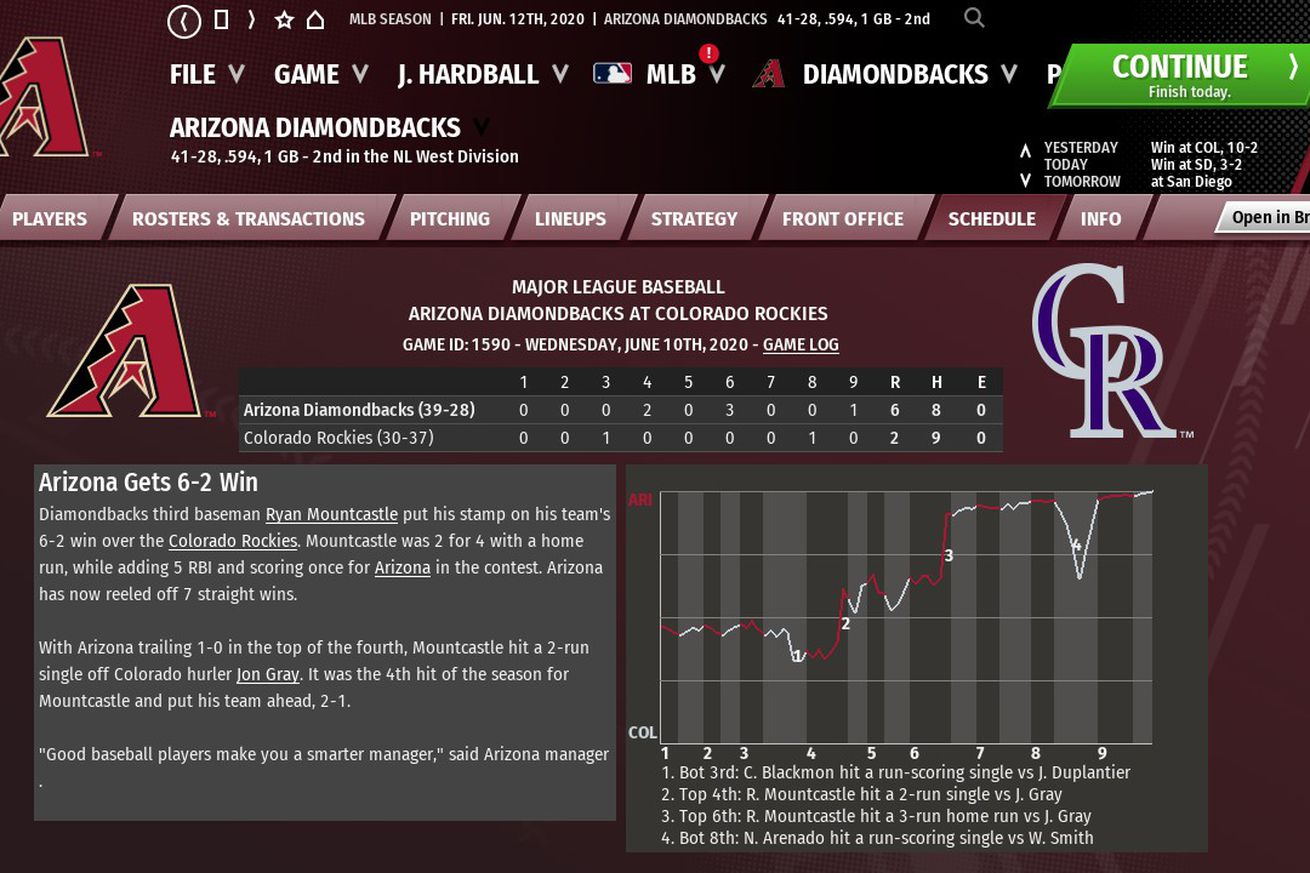 At least the early returns on the Mountcastle trade are looking good.

Arizona entered the Battle of the Jons in Colorado riding a six-game winning streak. Jon Duplantier was up to the challenge. Jon Gray, it turns out, was not.

The Rockies were actually the first to score in this game. Peter Boujous struck out swinging to start the Colorado third. Then, with one out, Gray contributed to his own cause with a single. Trevor Story then struck out swinging. David Dahl followed by working a walk out of Duplantier. Charlie Blackmon then singled, scoring Gray, before Nolan Arenado struck out looking. The inning accounted for the lion’s share of Duplantier’s entire pitching line for the game, including the only run he allowed.

While both starting pitchers went 5 2⁄3 innings and walked three batters, Duplantier was much more successful at limiting the damage. The Diamondbacks produced their first runs of the game in response to Colorado’s scoring. The fourth inning saw Ketel Marte draw a one-out walk. Christian Walker then flew out to center on the first pitch. Next began the hit parade. Carson Kelly, Josh Rojas, and Ryan Mountcastle all chipped in with singles. Marte was forced home by the Mountcastle hit. Rojas scored as well, showing off his speed as he flew around third and tested the arm of Dahl in left to score the go-ahead run. The Diamondbacks then piled on in the sixth inning, making Gray pay dearly for issuing free passes to both Christian Walker and Carson Kelly. With two outs, Mountcastle cleared the bases with a three-run homer, chasing the Colorado starter from the game.

Arizona’s bullpen came through in this game, helping close out the effort that Duplantier started. The Rockies managed to manufacture a run off of Andrew Chafin in the seventh, but that was the extent of their success. The Diamondbacks got that run back in the ninth when Nick Ahmed doubled, took second on a wild pitch and then scored on a sacrifice fly to right by Stephen Vogt.

The player of the game was Ryan Mountcastle. The new Arizona third baseman showed off his bat, going 2-for-4 with a home run and five of Arizona’s six RBI.

These two teams will finish this three-game series tomorrow. Zac Gallen will face off against Kyle Freeland.