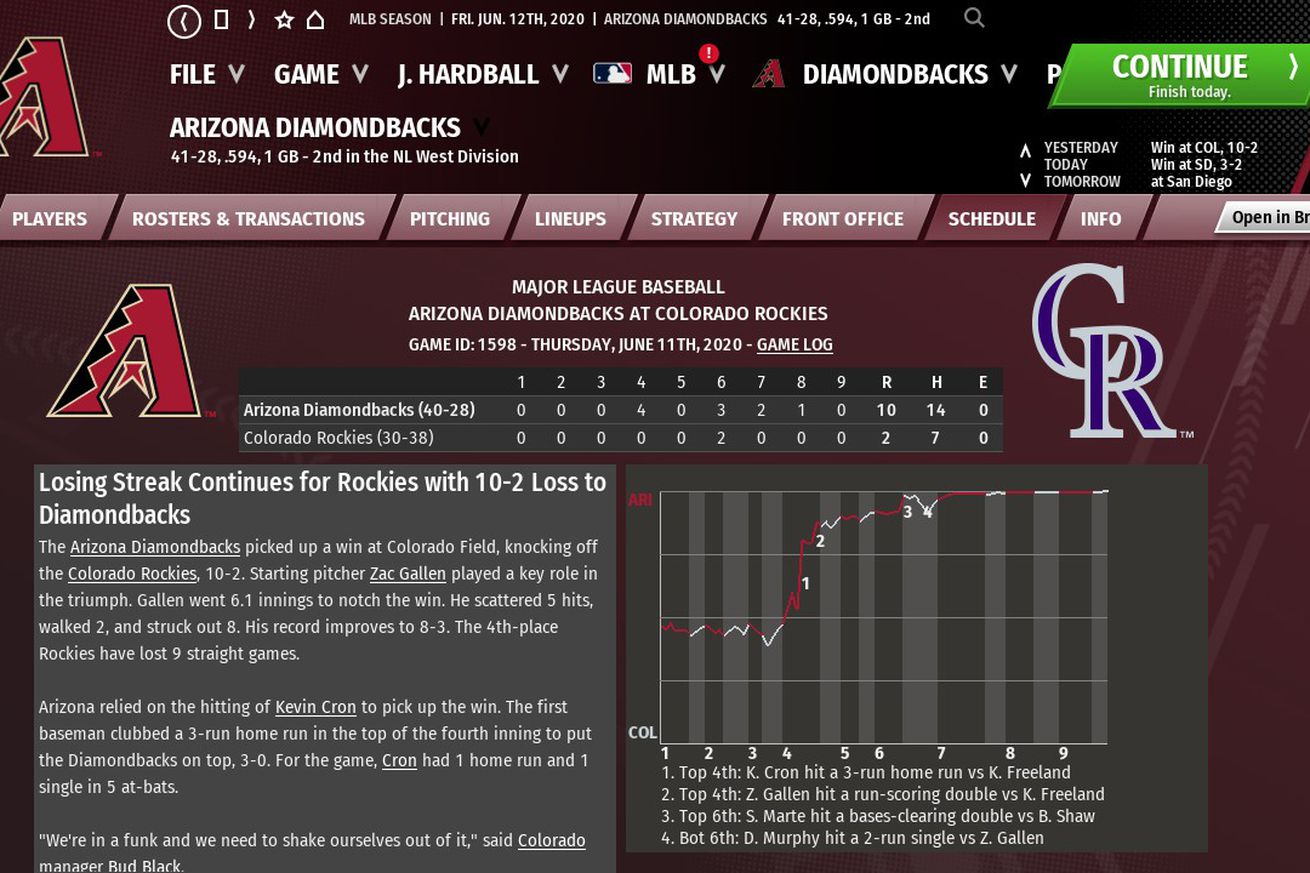 A 10-run explosion allowed the Diamondbacks to complete the sweep of the lowly Rockies.

Arizona cruised to a much-needed easy win on Thursday, downing the Rockies in Colorado. Zac Gallen had another strong outing, allowing only two runs while pitching his way into the seventh inning.

The story of the game was Arizona’s offense. The game remained scoreless through the first three innings as Kyle Freeland was showing off his better qualities as a pitcher. Then, after having gotten a good look at him, the Diamondbacks struck in the fourth inning.

Ketel Marte singled to get things started. Nick Ahmed followed by drawing a walk. A fly out by Josh Rojas was not deep enough to advance Marte, but a 423-foot fly off the bat of Kevin Cron was more than plenty to bring everyone home. The Diamondbacks were not done in the fourth. Stephen Vogt took one in the back pocket, bringing up Zac Gallen. Gallen helped his cause by lacing a double into the right center gap. Vogt got on his mule and rode it hard all the way home, just beating the throw from Peter Bourjos in a bang-bang play at the plate.

In the sixth inning, the Diamondbacks piled on. With two out, Jake Lamb singled. Stephen Vogt then did his best Tim Locastro impersonation, taking another hit-by-pitch. With the infield back, Gallen chipped a ball to the right side that died in front of second , loading the bases with an infield hit. That brought up Starling Marte. Marte lined a pitch down the right field line for a double. Lamb and Vogt scored easily. Gallen was waived home. The throw in went to third. Gallen scored, but Marte was caught trying to slide into third behind the play.

The Diamondbacks scored twice more in the seventh on a double by David Peralta followed by a triple off the bat of Ketel Marte. Marte then scored on a productive out to the right side by Nick Ahmed. The Snakes then scored yet again in the eighth when Peralta went deep with a solo-shot.

Colorado’s offense was limited in this game to two runs they scored off of Gallen in the sixth inning. Even in that inning, Gallen appeared to be in control.

The player of the game was Zac Gallen. Not only did Gallen keep the Rockies in check from the mound, he was 2-for-3 at the plate with an RBI and a run scored. Essentially, Gallen beat the Rockies on his own.

Tomorrow, the Diamondbacks will face off against the Padres in San Diego with Luke Weaver facing Luis Patino.