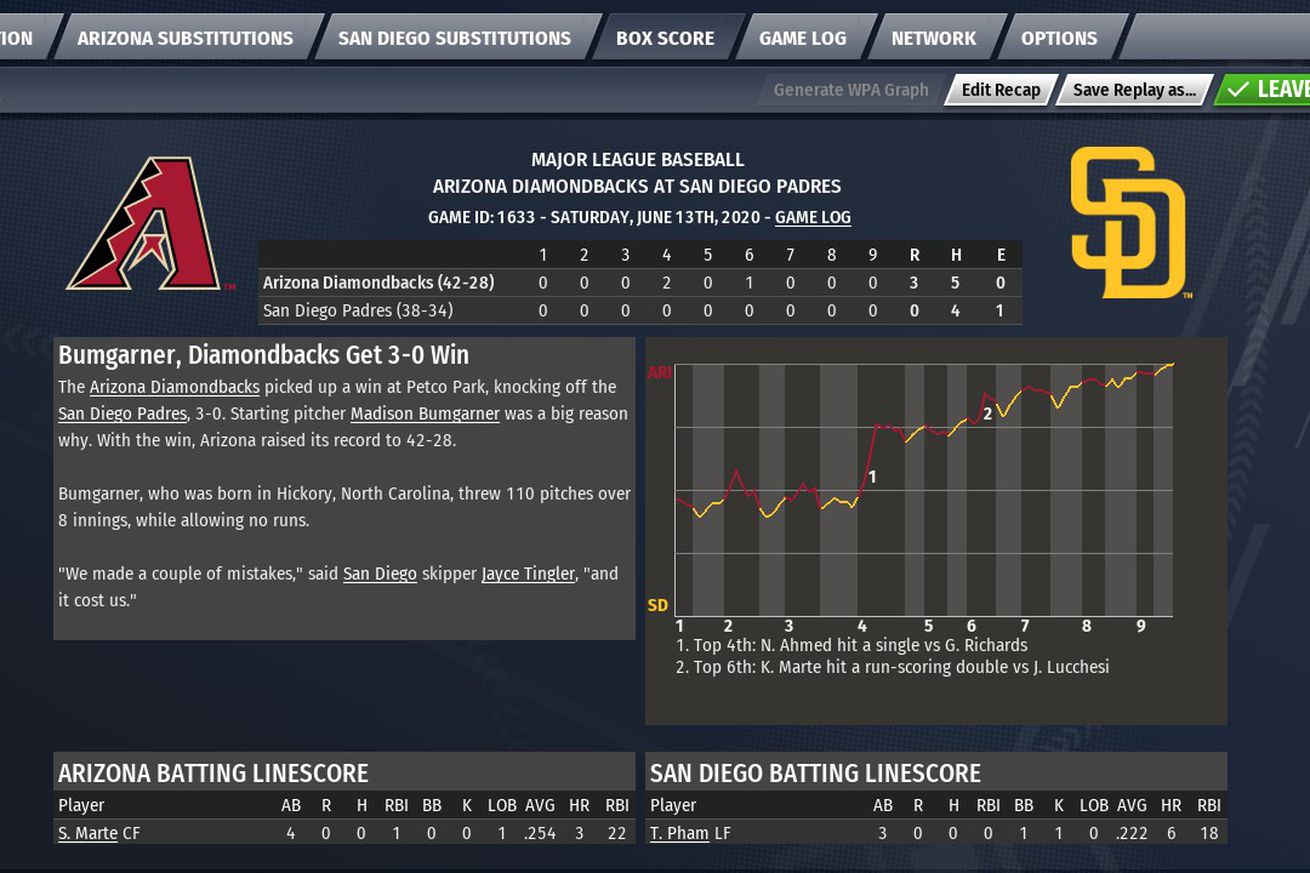 The former Giant lefty is giving Arizona all they could have hoped for.

There. There’s your recap. Honestly, that’s just about all anyone needs to know about this outing between the Diamondbacks and the Padres. Virtual Lovullo gave the veteran lefty a bit more to work with in this game, allowing Bumgarner to go all the way to 110 pitches in completing eight innings of shutout baseball. The Padres managed only four hits in the game. Three of those hits came off the bat of Yasiel Puig. One of those three singles was followed by a walk to Fernando Tatis Jr. That was the only time the Padres saw second base in this game.

Offensively, the Diamondbacks had a very strange day. Through four innings, Arizona managed only one hit. Yet, they were a patient team, drawing nine walks in those first four innings. It was the fourth inning that did in the Padres. In the inning, the Diamondbacks drew three walks while Nick Ahmed chipped in a single (the one and only hit the Snakes would hang on starter Garrett Richards). The Diamondbacks sent eight men to the plate in the inning, scoring two. This inning drove Richards’ pitch count up and he was out of the game one batter later after recording the first out of the fifth inning.

Not that Bumgarner needed it on this day, but the Diamondbacks added an insurance run in the sixth inning when David Peralta chipped a one-out single to center. He then scored on a double by Ketel Marte to right center.

With Bumgarner at 110 pitches and the game still in save territory, Virtual Lovullo sent Archie Bradley out to pitch the ninth inning. The change in pitcher did nothing to help the Padres. Bradley only needed nine pitches to complete a flawless ninth.

The player of the game was Madison Bumgarner. It was somewhat disappointing to not see MadBum get the opportunity to pitch a complete game shutout. However, Virtual Lovullo has been rather consistent on not allowing his pitchers to throw too many pitches, keeping his MLB-best pitching staff fresh and healthy. The fact that he even allowed MadBum to go 110 pitches says something about just how dominant the lefty was today.

Arizona finishes the three-game set against the Padres tomorrow. Robbie Ray (9-2, 3.52) will look to extend the Diamondbacks’ winning streak, while Chris Paddack (4-5, 3.42) will look to cool the scorching Snakes off.

The win allowed Arizona to keep pace with the Dodgers, maintaining a one-game deficit in the NL West. Arizona now leads the Wild Card standings by five games over the second place Padres.