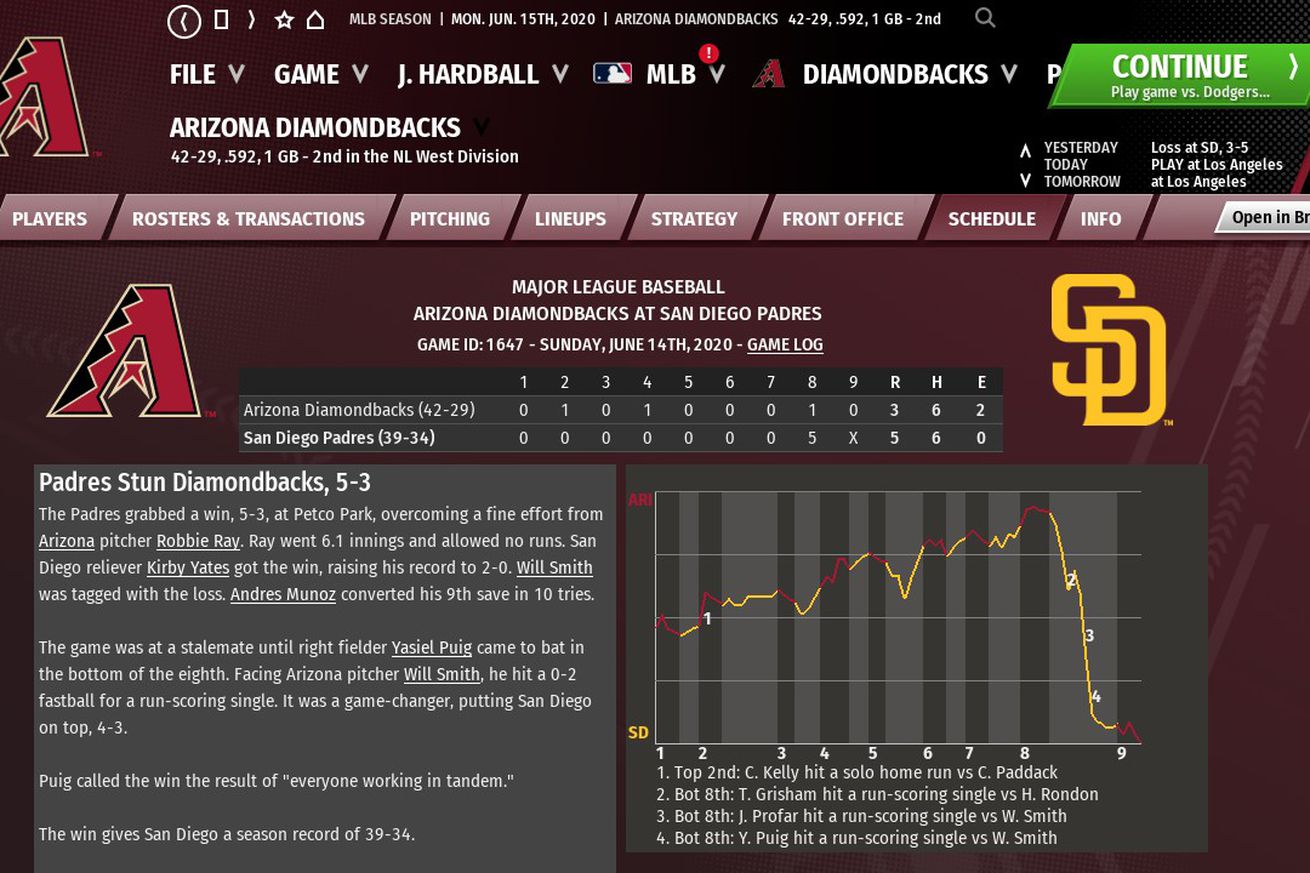 With a chance to catch the Dodgers on the line, Arizona’s bullpen lays an egg.

*The box score shows that Kevin Ginkel allowed a run to score. This is inaccurate. He closed out the seventh inning and was replaced by Héctor Rondón to begin the eighth.

The Diamondbacks entered today’s game riding another impressive winning streak. They also entered the game with an opportunity to catch the Dodgers in the NL West. Their chances looked good. After all, Arizona has handled the Padres well of late and Robbie Ray was taking the mound as the starter.

Robbie Ray did his part. In fact, he was , once again, fantastic. The power lefty pitched 6 1⁄3 innings of shutout baseball. He allowed only two hits and controlled the ball well, limiting the Padres to only two free passes as well. Combined with his 10 strikeouts, it is easy to claim he dominated the Padres. In fact, the only time the Padres even glimpsed second base came in the third inning, when Chris Paddack laid down a sacrifice bunt to move Francisco Mejia over to second. It was a wasted effort. Ray just finished off the side with a strikeout of Tommy Pham and a groundball to second off the bat of Todd Grisham.

The Arizona offense was not as dominant. Still, they did their job well enough to support Ray. Carson Kelly led off the second inning with a solo home run. Kelly was involved in more scoring in the fourth. David Peralta singled to left, stole second, then came home one out later when Kelly singled to right. The Snakes added a bit of insurance in the eighth inning when Nick Ahmed hit the first pitch of the frame into the left field bleachers. That shot put the Diamondbacks up by three with only two innings to go and the bullpen locked and ready to close things out.

Unfortunately, that insurance run was not enough, and the bullpen proved to be anything but ready. Héctor Rondón came in to pitch the eighth inning, looking to bridge the gap to Archie Bradley or Will Smith. It only took 12 pitches for the Padres to run Rondón from the game. The veteran righty allowed two runs to score on two hits and a walk, all without recording a single out. That was more than enough for Virtual Lovullo. He called on Will Smith to come in and to restore order. Alas, Smith was unable to strand Grisham at third, allowing the inherited runner to score and tie the game. Smith then went on to allow two more runs of his own making. Suddenly, the Diamondbacks were down by two with only the ninth inning left. Andres Munoz closed out the game for the Padres.

The player of the game was Robbie Ray. For 101 pitches, he was nearly untouchable. He certainly deserved a better fate than the no-decision he was hung with.