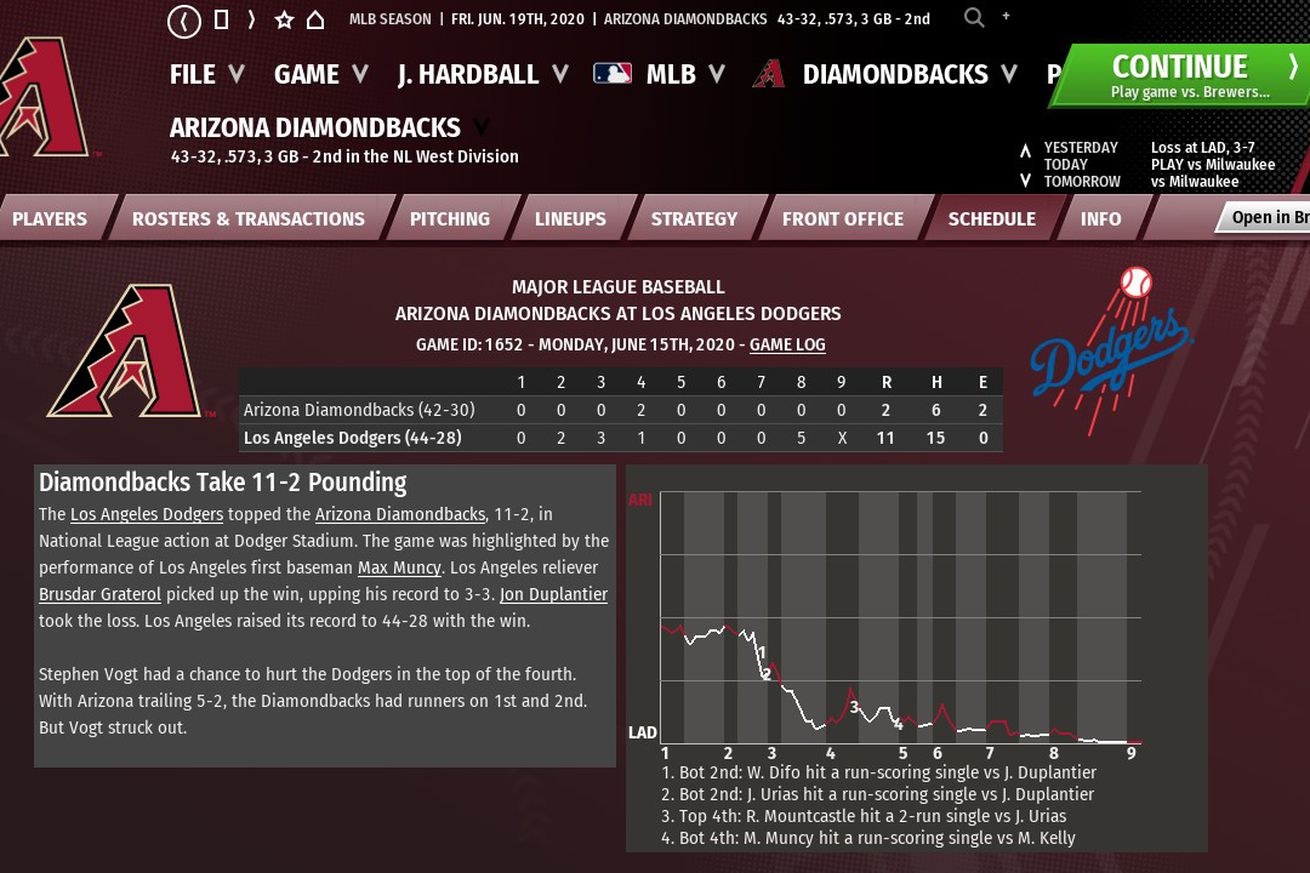 Arizona’s stellar pitching seems to have remained behind in San Diego.

Jon Duplantier had the sort of outing that should be quickly forgotten in order to spare his mental health. That his outing was not the worst of the night by a Diamondbacks pitcher should give some indication of just how poorly this game went. Duplantier’s night might have been even worse, if not for a great throw by Starling Marte in the third inning, which caught Cody Bellinger trying to score from second on a hit by Chris Taylor. That third inning was truly Duplantier’s undoing. Three of the seven hits (all of them hard hits) he allowed and all three free passes came in that inning – an inning in which he recorded only one out.

As bad as things were for Duplantier, it is not as though Julio Urias had a great night as the starter for the Dodgers. Urias had trouble finding the plate in this game. Even though he recorded six strikeouts, Urias’ outing looked very much like the sort Robbie Ray became known for in 2018 and 2019. In addition to his six strikeouts, Urias also walked four batters and allowed four hits, three of which came with a two-strike count. Urias left the game after allowing a one-out double to David Peralta in the fifth inning. Even though the Dodgers held a four-run lead at that point, Virtual Dave Roberts had seen enough and turned the ball over to his bullpen. While the L.A. bullpen was not exactly the model of control, it did manage to keep the Diamondbacks off the board for 4 2⁄3 innings, allowing only two hits to go along with three more free passes for Arizona.

Merrill Kelly had a decent outing. The starter-turned-reliever managed to record one more out than Duplantier did. He also avoided issuing any free passes. The box score will show that Kelly allowed a run to score in the fourth inning. That run was about as unearned as one can possibly be. Justin Turner started the frame off by grounding down to third base, where Ryan Mountcastle promptly booted the ball. Corey Seager moved Turner up to second with a clean single into left. Kelly then struck out both Mookie Betts and Cody Bellinger swinging. He should have been out of the inning. Instead, he still had to face Max Muncy. Muncy worked the count to 3-2. With two outs in the inning and a full count, the runners were off with first movement. Muncy lifted a fly ball into right field that had some significant tailing action. Josh Rojas misplayed that tailing action and had the ball glance off his glove, about the same time as Turner was crossing the plate. Kelly finally out of the inning when Chris Taylor grounded out to second and Ketel Marte was able to make the first clean play of the frame.

Héctor Rondón’s run of bad luck continued into tonight. The right-hander only recorded two outs in his outing. In the time it took him to record those two outs, he allowed four hits and plunked a batter, leading to four more runs for the Dodgers.

Max Muncy was named player of the game in this routing of the Diamondbacks. The Dodgers’ first baseman was 2-for-4 with three RBI in the game.

The loss drops Arizona to two games behind the Dodgers in the NL West. Things do not get any easier for the Diamondbacks tomorrow. On Tuesday, the Diamondbacks will face Clayton Kershaw (5-1, 3.56). Zac Gallen (8-3, 3.78) will take the mound for Arizona.