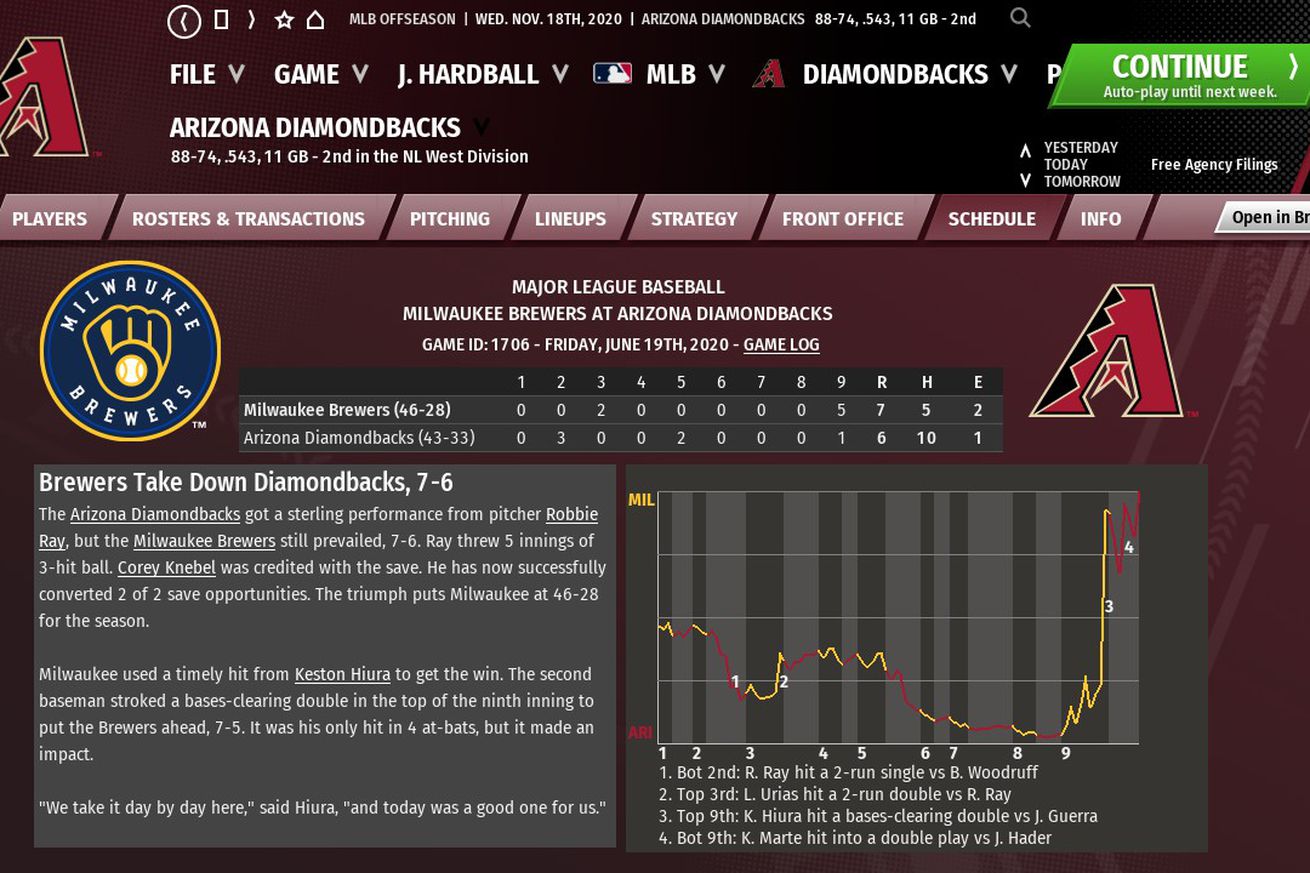 Arizona suffered another loss of the painful variety, this one against the Milwaukee Brewers.

This is a game the Diamondbacks should have won. First, they give Milwaukee’s Brandon Woodruff a proper pounding. Then 2 1⁄3 innings later, they mildly beat up on Josh Hader. The offense came through with six runs in support of Robbie Ray. Christian Walker even got himself back over the Uecker Line, going 3-for-5 on the evening. David Peralta continued to impress with a three-hit day of his own. Robbie Ray did his part, continuing his excellent season with another strong outing.

With all that going for them, the Diamondbacks entered the 9th inning with a three-run lead. To put a bow on the game and to prevent a losing streak, the team turned to Archie Bradley, one of the best relievers in baseball. Avisail Garcia started things off with a seven-pitch walk. Jedd Gyorko then reached safely on an error by Ryan Mountcastle at third. This error turned out to be key. Brock Holt followed. He struck out swinging. Then cam a pair of four-pitch walks from Bradley. The first, to Omar Narvaez loaded the bases. The second, to Lorenzo Cain, forced home a run. Luis Urias then flew out to Josh Rojas in deep right field to – not quite end the game. Thanks to the error by Mountcastle there were still only two outs. At this point, Virtual Lovullo decided to get Bradley out of the game and turned the ball over to Junior Guerra. Why Lovullo did not stick with Bradley is a matter for some debate. Sure, Bradley had been shaky to that point. However, Junior Guerra has spent the entire season doing some sort of tightrope act. Still, make the change he did. A wild pitch, a walk, and a double later, the Brewers had a two-run lead. Only then did Guerra finally record the final out of the Brewer ninth – a fly out to the warning track in center off the bat of Ryan Braun.

The Diamondbacks answered in the ninth inning when they recorded three hits off Josh Hader. A double play got Hader off the hook somewhat, allowing only one run to score. This brought up Josh Rojas. He drew a walk off of Hader’s relief, Corey Knebel. This brought up Carson Kelly. Kelly was first pitch swinging. He wound up flying out to Braun, who made a great play behind first.

Robbie Ray once again took home player of the game honors. The lefty struck out eight while mostly cruising through his 5 1⁄3 innings of work.

A few items came down in the post-game presser. Kevin Ginkel complained of a strained oblique after he was pulled. The trainers put in some work and he is not expected to need to make a trip to the IL, though he will be monitored closely. In other injury news, it was announced that Tim Locastro has done well in his rehab stint and is on his way back from Reno to join the team. He is expected to be ready to play if called upon tomorrow. Additionally, it was announced that the Diamondbacks have made another trade. This trade sent J.B. Bukauskas and fan favorite, Kevin Cron, to the Los Angeles Angels of Anaheim. In return, the Diamondbacks received top-100 prospect, center fielder, Brandon Marsh. Marsh will head to Reno for the time being. The standout center field prospect joins Kristian Robinson and Alek Thomas at the top of Arizona’s prospect list.

The same two teams will meet again tomorrow. Corbin Burnes gets the nod for Milwaukee, while Jon Duplantier will look to stop Arizona’s losing streak before it picks up any steam.