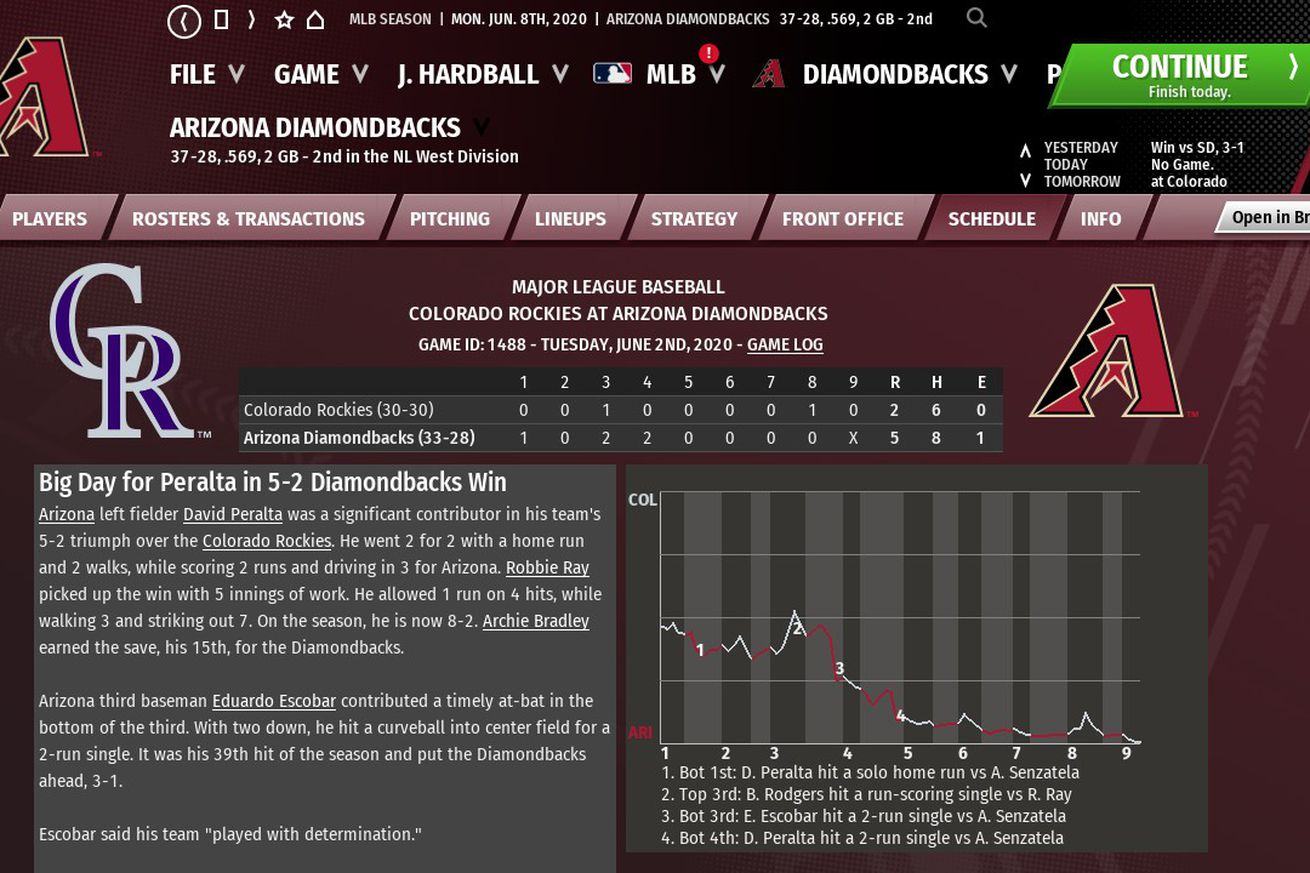 Robbie Ray turned in another solid start and David Peralta carried the offense to help Arizona stave off a losing streak.

Roster move alert: Before the game, it was revealed that Alex Young had been optioned to AAA-Reno. The corresponding move was the recall of right-handed starter, Jon Duplantier. The move was somewhat surprising, given that Young was mostly holding his own, pitcihng as a roughly league average left-handed reliever. The move leaves Andrew Chafin as the lone left-hander currently in the Arizona bullpen.

The fact that the Diamondbacks scored more in the first three innings of this game than they managed across the previous 22 innings was somewhat refreshing. It gave hope that, as long as Robbie Ray pitched a decent game, the Diamondbacks might actually be in a position to win the affair.

Robbie Ray delivered. The Snakes’ power lefty only went five innings in this game. His pitch count climbed a bit due to walking three hitters in addition to striking out seven. However, he managed to avoid getting himself into deep trouble with his free passes. This was simply another game in which his strikeout pitch was not always fooling hitters, resulting in plenty of two-strike foul balls. The lone run he surrendered came in the third inning. It began with a seven-pitch walk to David Dahl. Trevor Story followed by running the count full before blooping a single which sent Dahl from first to third, Dahl just getting in under the throw from Rojas. Brendan Rodgers then took a 1-0 pitch and grounded it sharply past Nick Ahmed at short to score Dahl. Visible upset, Ray proceeded to strike out the next two batters. He followed that up by blowing right through the next five batters as well. Trevor Story then drew a four-pitch walk in the fifth, after which he stole second base. That was as far as Story would get though, as Ray induced a weak fly to left out of Rodgers.

For the Diamondbacks, the good news started in the first inning. With one out, David Peralta poked a home run the opposite direction into the Arizona bullpen. This gave the Diamondbacks a quick lead and helped to shake the slump monkey from the team’s back. Peralta was at it again in the third inning. This time, Peralta came to bat with two away in the inning. Rather than allowing the Diamondbacks to go quietly, Peralta worked his way to a walk to extend the inning. That brought up Ketel Marte, who doubled to center, sending Peralta to third. Next up was the struggling Eduardo Escobar. Escobar responded by grounding a grass-burner through the right side, scoring both Peralta and Marte.

Peralta was still not done contributing to the winning effort. The Diamondbacks went back to work against Colorado’s pitching in the fourth inning. Carson Kelly got things started with a lead-off walk. He advanced to second on a line drive single by Lamb. Nick Ahmed followed with a fly out to right which was not deep enough to advance Kelly. Robbie Ray then helped his own cause by laying down a successful sacrifice bunt, advancing both Kelly and Lamb. Starling Marte then drew a walk of his own, loading the bases for Peralta. The Freight Train did not disappoint, lining a single into the left center gap. Kelly scored easily. With the play taking Dahl away from the infield, Jake Lamb was also waved around. He scored a good five feet ahead of the throw home by Dahl. That put the Diamondbacks up by four, more than enough for their bullpen to hold.

The Rockies went tamely the rest of the way. They did manage to score one more run, on a combined effort of a hit-by-pitch, a double, and a sacrifice fly. That sequence represented two of the three base runners that Colorado managed over the final four frames. Archie Bradley to another save to secure the victory.

The player of the game was David Peralta. With a home run, a two-run single, and two runs scored, Peralta managed to contribute more offense by himself than the entire Colorado lineup.

The two teams will meet for the rubber game tomorrow. Colorado will start Ashton Goudeau. For Arizona, Zac Gallen is next up in the rotation, though Duplantier would also be on normal rest. Virtual Lovullo has not yet announced which will start.