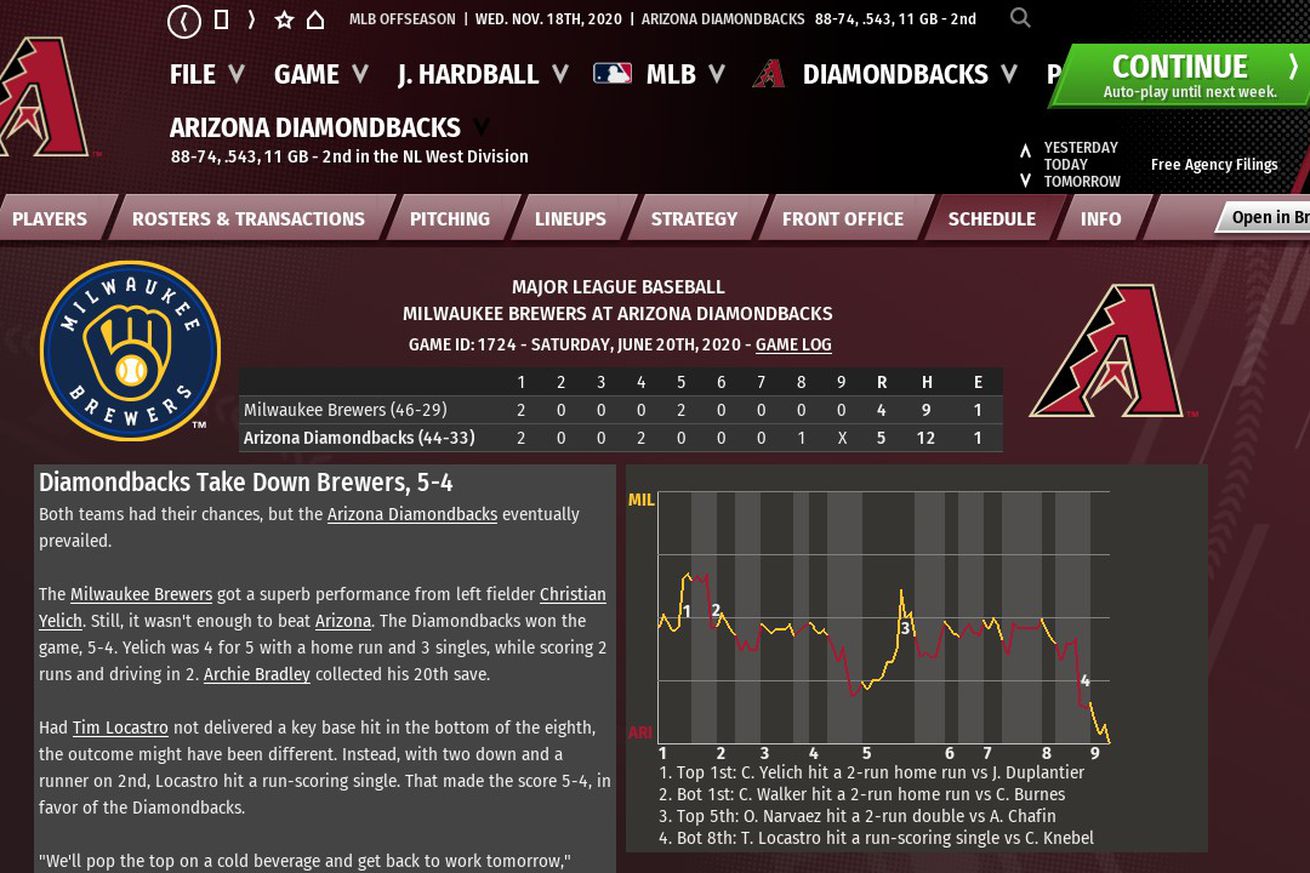 Tim Locastro returns to the lineup in his first game back from an extended stint in injury rehab.

It was not a pretty win by any stretch of the imagination. However, a win is a win. Tim Locastro returned to the Diamondbacks after an extended absence. His return came just in time, as Arizona has started showing signs of fatigue in this long stretch of games against quality opponents. Locastro’s return allowed Virtual Torey Lovullo to give Starling Marte a day off to freshen his legs. Locastro responded to gettting the starting nod by going 1-for-4 with a walk. Locastro’s one hit was an RBI single in the eighth inning which pushed the game-winning run across the plate.

On the mound, the Arizona rotation continued to show some cracks and to put more pressure on a now fatiguing bullpen. Jon Duplantier had his roughest outing of the season, lasting only 4 1⁄3 innings. Given the bullpen fatigue, it was a bit surprising that Virtual Lovullo was so quick to pull the plug on Duplantier.

Arizona was leading by two after four. Duplantier started the fifth inning with a quick, one-pitch out before walking Keston Hiura. That brought an end to Duplantier’s outing. Virtual Lovullo then called upon Andrew Chafin to keep the game in check. The lefty’s first opponent was left-handed hitting Christian Yelich. In that sense, going for the platoon advantage from the mound makes some sense. It just feels like it came early. As it was, Chafin was unable to retire Yelich. With the count 1-1, Hiura cleanly stole second base on Chafin. Then, three pitches later, Yelich tapped a ball towards second and beat out the play for an infield single. Hiura took third on the play. That brought Luis Urias. Chafin walked Urias to load the bases, bringing up another lefty bat in the person of Omar Narvaez. As with Yelich, Chafin was unable to take advantage of his platoon advantage, Narvaez doubled into the gap in right center, scoring both Hiura and Yelich, which also tied the game. Virtual Lovullo had seen enough. He made another call to the bullpen and brought in Héctor Rondón. Rondón was mostly flawless. He struck out Jedd Gyorko before being asked to intentionally pass the lefty, Brock Holt. That brought Justin Smoak to the plate as a pinch-hitter. Smoak went down swinging to end the top of the fifth with the score still tied.

With Smoak pinch-hitting in the top of the inning, Burnes was out of the game. That meant Milwaukee was left needing to get five full innings out of its bullpen. In the first three of those innings, they scattered three hits and two walks without allowing a run. Tat brought the game to the eighth inning.

The bottom of the eighth inning started with Ryan Mountcastle getting hit by a Corey Knebel pitch. Ildemaro Vargas followed with a long fly, but the fl was to dead-away center field, preventing Mountcastle from advancing. This brought the pitcher’s spot in the order up. Starling Marte was called upon to pinch hit. For some reason, Marte elected to lay down the bunt. The sacrifice was successful, but one wonders about a pinch-hitter giving himself up in the same manner a pitcher could have. With two outs and Mountcastle on second, Locastro came to the plate. With the count 1-0, Locastro grounded one into left field. Mountcastle took the turn hard at third and scored ahead of the throw from a charging Yelich. That gave the Diamondbacks the lead again.

Entering the ninth with a one-run lead, the Diamondbacks once again turned the ball over to Archie Bradley, hoping his problems from his previous outing were firmly behind him. As it turns out, they were. While Bradley did allow a hit, he struck out two on his way to recording his 20th save of the season.

The player of the game was Christian Yelich. The MVP candidate was 4-for-5 with 2 runs and 2 RBI in the game.

Tomorrow is the rubber game of the series. The Brewers will start Josh Lindblom, while the Diamondbacks will start Zac Gallen.