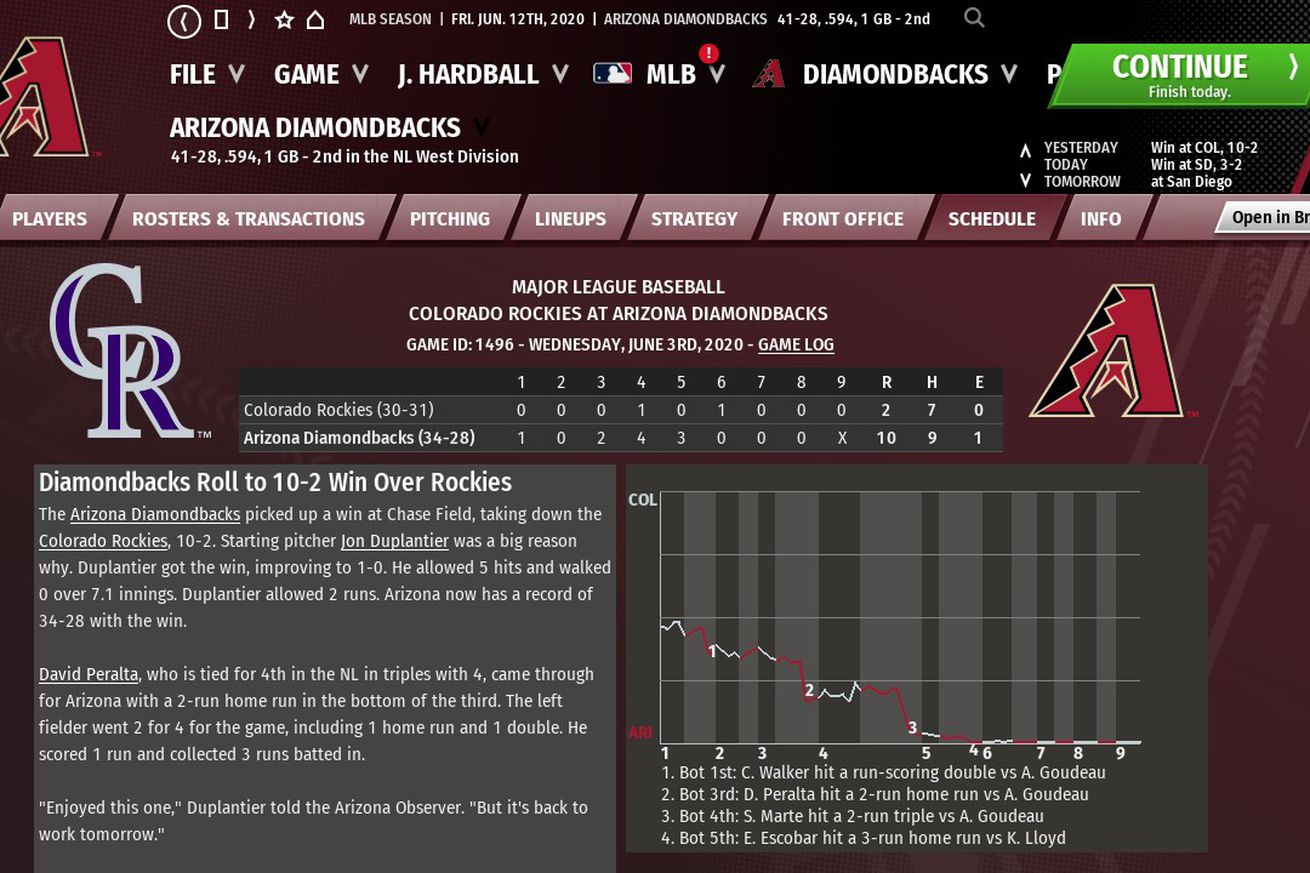 Leave it to the Arizona offense to finally have a big outing in a game where the massive run total was unnecessary.

As many expected might happen, Arizona’s excellent but overworked pitching staff was given something of a breather today, as Jon Duplantier took the mound for the Diamondbacks, pushing Zac Gallen’s scheduled start all the way back to Friday.

The Colorado Rockies sent Ashton Goudeau to the mound for the matinee game at Chase Field. The Diamondbacks wasted no time if applying pressure. With two gone in the bottom of the first, Ketel Marte singled. Christian Walker then doubled to center. The throw home was not in time to catch Marte, who was running hard on contact. Walker took third on the throw. Josh Rojas then sent a fly ball to the warning track in right, but Charlie Blackmon was able to chase it down to end the inning.

The third inning was both a hot and cold inning for Arizona. Jon Duplantier started things off by striking out. Starling Marte then singled. That brought up David Peralta, who put a charge into one, sending it opposite field into the left field bleachers. Ketel Marte and Christian Walker then followed with swinging strikeouts.

The fourth inning was a big inning for both teams. It was in the fourth that the Rockies finally broke through against Duplantier. To that point, the Rockies had only one hit, a weak single to right by David Dahl. Their only other base runner came courtesy of a throwing error by Eduardo Escobar in the second. In the fourth, Dahl led things off with a single. With Nolan Arenado batting, Dahl advanced to second on a wild pitch. Arenado grounded out to the right side, advancing Dahl to third. That brought up Daniel Murphy with two out. Duplantier was unable to strand Dahl at third. Murphy waited back on a Duplantier curve and hit a line drive double to right, scoring Dahl. Duplantier then retired Brendan Rodgers on a lazy fly.

The Diamondbacks were ready to respond when they came up in the bottom half of the inning. The frame stated off tamely enough. Josh Rojas hit the first pitch he saw into the ground for Daniel Murphy to make easy work of at first. Carson Kelly then singled. With Eduardo Escobar batting, Goudeau uncorked a wild pitch, allowing Kelly to take second. Escobar then grounded out to Goudeau, with Kelly taking third on the play. This brought up Nick Ahmed, who was intentionally walked so that the Rockies could avoid his “potent” bat and pitch to Duplantier. The plan backfired. Duplantier took the intentional walk personal and helped his own cause, singling through the 5.5 hole. Jelly scored, Ahmed took second. Starling Marte followed. He took the first pitch and sent it flying into the gap in right center. The ball went to the wall, allowing Marte to speed around the bases for a triple, scoring both Ahmed and Duplantier. That brought about a pitching change, the Rockies electing to have the right-handed Kyle Lloyd face the dangerous, lefty-batting David Peralta. Peralta made Virtual Bud Black pay for giving the Diamondbacks the platoon advantage, belting a double and scoring Starling Marte.

In the fifth inning, the Diamondbacks continued to pile on. Christian Walker and Carson Kelly both walked, sandwiching a flyball to center off the bat of Josh Rojas. That brought Escobar to the plate. Escobar got around on a Lloyd fastball, hitting it 410 feet into the right field bleachers, putting the Diamondbacks up nine.

The Rockies were cooked, but not quite done. In the sixth inning, David Dahl hit his second triple of the game (tying a Colorado record for three-baggers in a game by a single player). He was then brought home on a ground out to the right side by Blackmon. That, however, would mark the point at which the Rockies were done. The Rockies only managed three more hits the rest of the game as Arizona cruised to victory.

The player of the game was Jon Duplantier. The right-hander looked confident and in command from the moment he took the mound.

The Diamondbacks are off tomorrow. Their next opponent is the San Diego Padres, who are currently tied with the Diamondbacks for second in the NL West, two games behind the Dodgers. This is going to be an important series. Arizona will have a few options for who to start on Friday, as both Zac Gallen and Luke Weaver should be available. The Padres are expected to start Zach Davies.