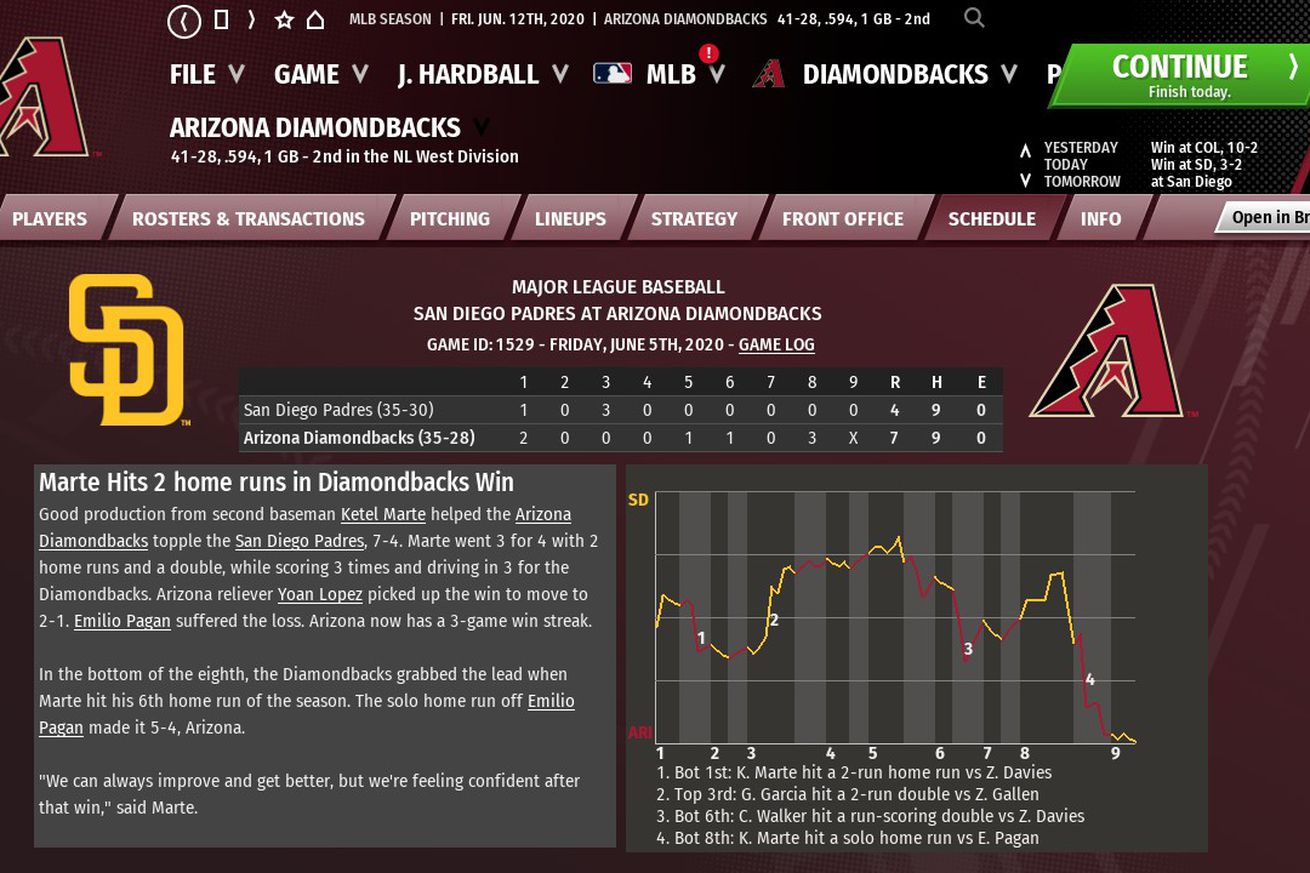 The Diamondbacks bolstered their MLB-best bullpen and made a move to improve production out of the lineup.

Having just completed the draft, the Diamondbacks hosted the San Diego Padres at Chase Field Friday night. The Friars rolled into Phoenix tied with the Snakes for second place in the NL West, only two games behind the Los Angeles Dodgers. Were the season to end at the moment, the Diamondbacks and Padres would also represent the two Wild Card teams for the NL. Under most normal circumstances, that would make a decisive victory over the Padres the big news of the night. But, this was not a normal evening.

During batting practice, Virtual Torey Lovullo came out to find Eduardo Escobar to tell him it was time for him to pack up his locker, he had been traded. About that same time, Nick Piecoro broke news that the Diamondbacks were in the final stages of a blockbuster deal. Meanwhile, news trickled out from Baltimore that Ryan Mountcastle’s locker had been packed up and he was seen making his goodbyes. Plenty of speculation started to mount as to what sort of deal Arizona and Baltimore had struck. At game time, the rest of the news finally broke. Piecoro was finally able to confirm that the Diamondbacks had indeed completed a blockbuster deal as part of a two-move day. In part one, the Diamondbacks sent Silvino Bracho to the Baltimore Orioles for Ryan Mountcastle. The second, complementary deal, sent Eduardo Escobar to Atlanta. The return for Escobar, left-handed closer, Will Smith and AA starter Brandon Miller. Additionally, in order to make room for both Mountcastle and Smith on the 26-man roster, Mike Leake was designated for assignment. This flurry of moves left the Diamondbacks with only a 24-man roster for the game against the Padres. Arizona’s excellent pitching made sure that there wouldn’t be a problem.

While Arizona does boast arguably the best pitching staff in baseball, Zac Gallen had a rough day as an individual. Tommy Pham put the Padres on top first with a lead-off homer to start the game. The lead was short-lived though. The Diamondbacks responded with a two-run shot of their own, this one off the bat of Ketel Marte, driving in David Peralta who had walked.

The Padres struck again in the third inning. This time, the Padres scored by nickel and diming Gallen. With one out, pitcher, Zach Davies grounded a single into right. This was followed by a bloop single into center by Pham. A double to left by Greg Garcia scored both base runners. A fly-out to right off the bat of Fernando Tatis, Jr advanced Garcia to third. This allowed Garcia to then score on a groundball single into left by Manny Machado. Gallen stopped the bleeding there, but he had already been tagged for four runs in only three innings.

With Gallen due to lead off the home half of the inning, he was lifted for pinch-hitter, Jake Lamb. That wound up being an unproductive at-bat. However, it did set things up for the Arizona bullpen to pick up Gallen, which they did – in spades. Six Arizona relievers combined to entirely shut down the Padres for the final six innings of the game. This performance by the Arizona bullpen allowed the Diamondbacks to gradually erase San Diego’s lead. With a single tallies in both the fifth, the Diamondbacks brought the defecit to one. Another single tally tied the game in the sixth inning when Ketel Marte and Christian Walker banged out back-to-back doubles.

David Peralta began the home half of the eighth with a routine groundout to second. Then, Ketel Marte put the Diamondbacks back on top with a blast deep into the left field bleachers. Christian Walker grounded out to short. Josh Rojas then grounded a ball past a diving Greg Garcia at second base for a two-out single. Michel Baez was then brought in to face Carson Kelly. With a 2-1 count, Kelly was waiting on a Baez fastball. Baez obliged. Kelly blasted a two-run home run 455 feet, onto the concourse in left center. That put the Diamondbacks up by a comfortable three runs, more than enough for the bullpen to protect.

The player of the game was Ketel Marte, who had a tremendous day at the plate, accruing 3 RBI and scoring three runs.

The win gave Arizona sole possession of second place in the NL West. The same two teams meet again tomorrow with the Padres sending Luis Patino up against Luke Weaver.