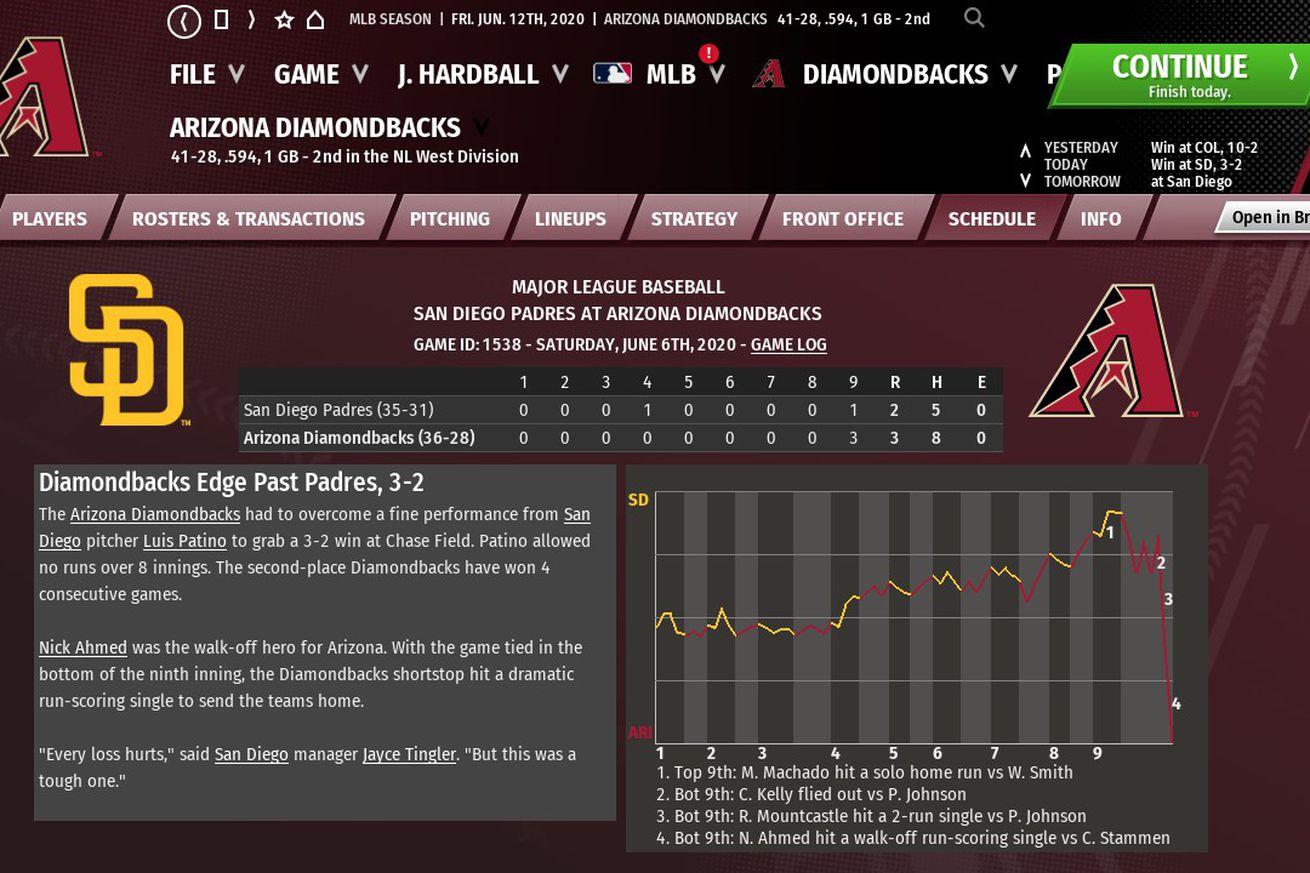 Back in the days of newspapers needing stories done by 10 pm to make the print deadline, it was not uncommon for the back page of the sports section to have the box scores for games that ended too late to print about. Recaps came later. Let’s just pretend it is 1982 for a moment and overlook the fact that this recap is hitting the wire about 16 hours later than intended.

This game between the Diamondbacks and the Padres marked the Arizona debuts for both Ryan Mountcastle and Will Smith. One had a decent debut, the other had a somewhat shaky one. At stake, sole possession of second place in the NL West and the first Wild Card berth.

Both starting pitchers were on their game in this one. Luis Patino pitched a gem of a game. He shutout the Diamondbacks for eight innings, striking out ten and not allowing a single free pass. Patino put on a clinic, carving up Arizona batters almost at will. Josh Rojas was the only Arizona player to make it further than first base, courtesy of a two-out triple in the fourth inning.

For his part, Luke Weaver also had a good outing. The Arizona righty gave six innings of one-run ball during which he allowed only three hits and two free passes. The lone run came in the fourth inning when Eric Hosmer tripled by hitting a ball into the corner. He then scored on a ground ball to second off the bat of Abraham Almonte.

Down a run entering the ninth inning, Virtual Lovullo turned to his new bullpen weapon, Will Smith to keep the deficit at one run. Smith responded by allowing a solo home run to Manny Machado. After that shot, it seemed the Diamondbacks were poised to hang a tough loss on Weaver. However, the Padres turned to their bullpen, meaning that Patino was no longer available to continue dominating the Snakes.

Andres Munoz walked the first two batters he faced, David Peralta and Ketel Marte. Munoz then fell behind Christian Walker 3-0. Four pitches later, Walker struck out swinging. This brought about another pitching change. Pierce Johnson took the mound for the Padres. He too, had difficulty finding the plate and loaded the bases by walking Josh Rojas on four pitches. Carson Kelly then popped out to Fernando Tatis Jr. in shallow left, bringing Ryan Mountacstle to the plate. Mountcastle took this opportunity to make a good first impression, singling into right field, scoring Peralta and Marte, tying the game. Another pitching change by the Padres proved fruitless. Nick Ahmed singled, scoring the speedy Rojas and sending the Diamondbacks faithful home happy.

The player of the game was easily Luis Patino. The Padres’ starter could hardly have made his eight shutout innings look any more effortless. The same two teams are at it again tomorrow .