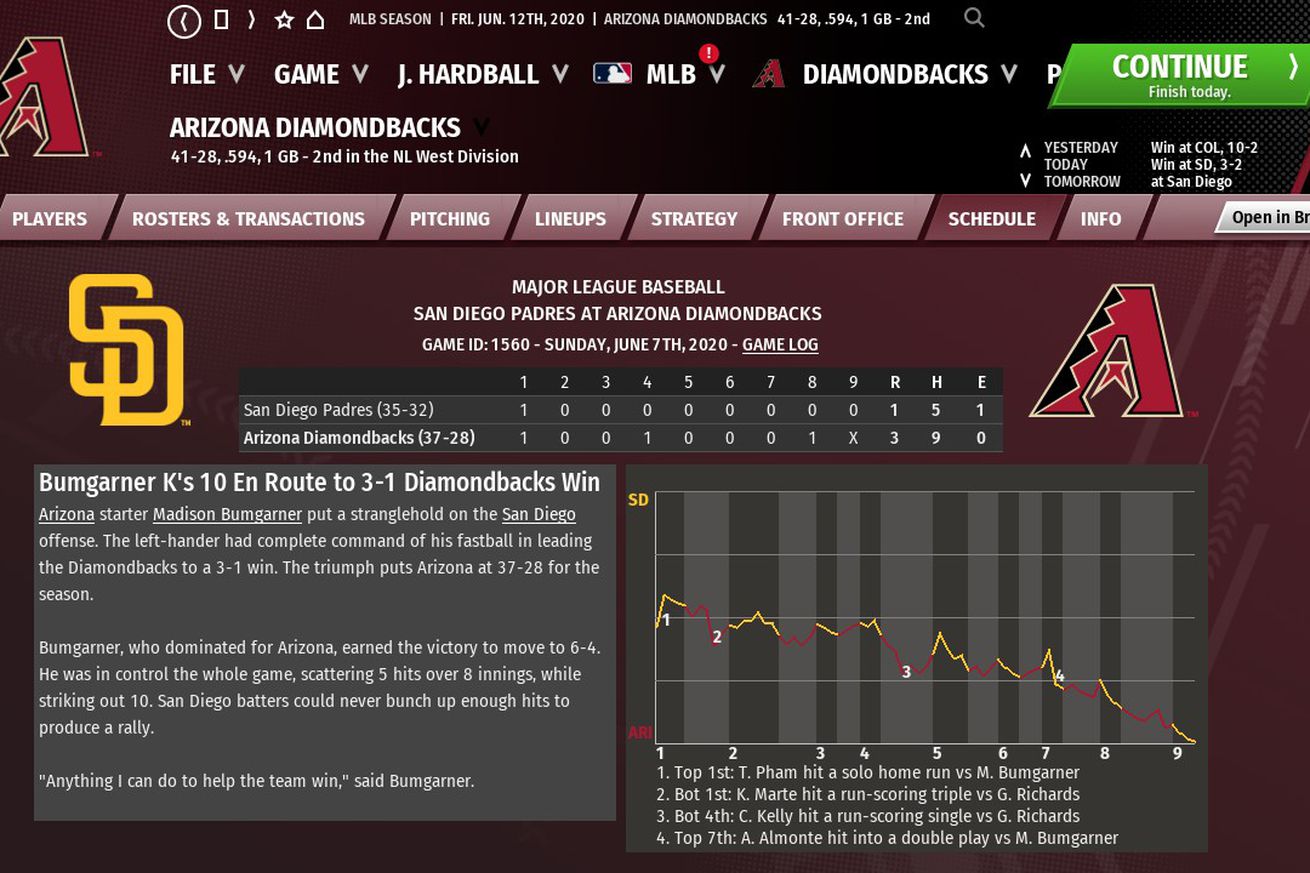 A three game sweep of the Padres puts Arizona in a commanding position in the standings.

It only took one pitch for Tommy Pham and the San Diego Padres to ruin Madison Bumgarner’s perfect game, his no-hitter, and hit shutout. The Friars’ left fielder put a good swing on a Bumgarner fastball which caught too much plate and deposited it in the sixth row of the bleachers. That brought plenty of excitement to the San Diego bench. That excitement was shirt-lived. Eight full innings, four hits and two walks later, the Padres only managed one runner beyond first base. Meanwhile, the fanned 10 times in the game, allowing Bumgarner to cruise along without much worry.

Overshadowed by Bumgarner, Garrett Richards put together a decent performance. The Padres starter allowed only two runs through 6 1⁄3 innings of work. On most nights, that would be more than enough. On this night though, Richards left the game looking down the barrel of a tough loss. The Diamondbacks did their scoring via the small ball in this game. The first score came in the bottom of the first, erasing the one-run lead that Pham had spotted the Friars. Starling Marte singled then stole second. He later scored on a triple by Ketel Marte.

In the fourth inning, the Diamondbacks used speed to claw their way into the lead. Josh Rojas started the frame with a walk. Then, with Carson Kelly batting, he stole second base. Kelly then singled on a line drive to right. The speedy Rojas never broke stride and scored on the play. Ryan Mountcastle flied out on the first pitch he saw, bringing Nick Ahmed to the plate. Ahmed singled, putting two on for Bumgarner. Bumgarner chose to sacrifice bunt, rather than swing away. This put Ahmed and Kelly at second and third, but with two away. Starling Marte was unable to bring them home.

Still, that speedy Rojas run proved to be the difference maker in this game. With Bumgarner chewing up the San Diego lineup, the Diamondbacks didn’t need a bug day out of the lineup. They did still manage to tack on an insurance run once they started facing the San Diego bullpen.

A single by Christian Walker and a walk by Josh Rojas set the table for Nick Ahmed. With two outs, Ahmed lined a single into center. With two away, Walker was running on contact. Those extra two steps made the difference as he scored from second, just getting in under the tag by Fernando Mejia on the throw home by Almonte.

Up two, the Diamondbcks turned the ball over to Archie Bradley to close out the ninth. He was flawless, triking out the side to notch yet another save.

The player of the game was Madison Bumgarner. It only took the veteran lefty 102 pitches to carve up and make a meal of the Padres for eight innings. Had it not been for Pham’s lead-off homer, Bumgarner likely goes out and pitches the ninth to attempt to add another feather to his cap.

The win gave the Diamondbacks the series sweep and provided three games of breathing room between themselves and the Padres in the NL West. The Diamondbacks are off tomorrow. They will play next in Colorado. The match-up is expected to be Robbie Ray against Wes Parsons.