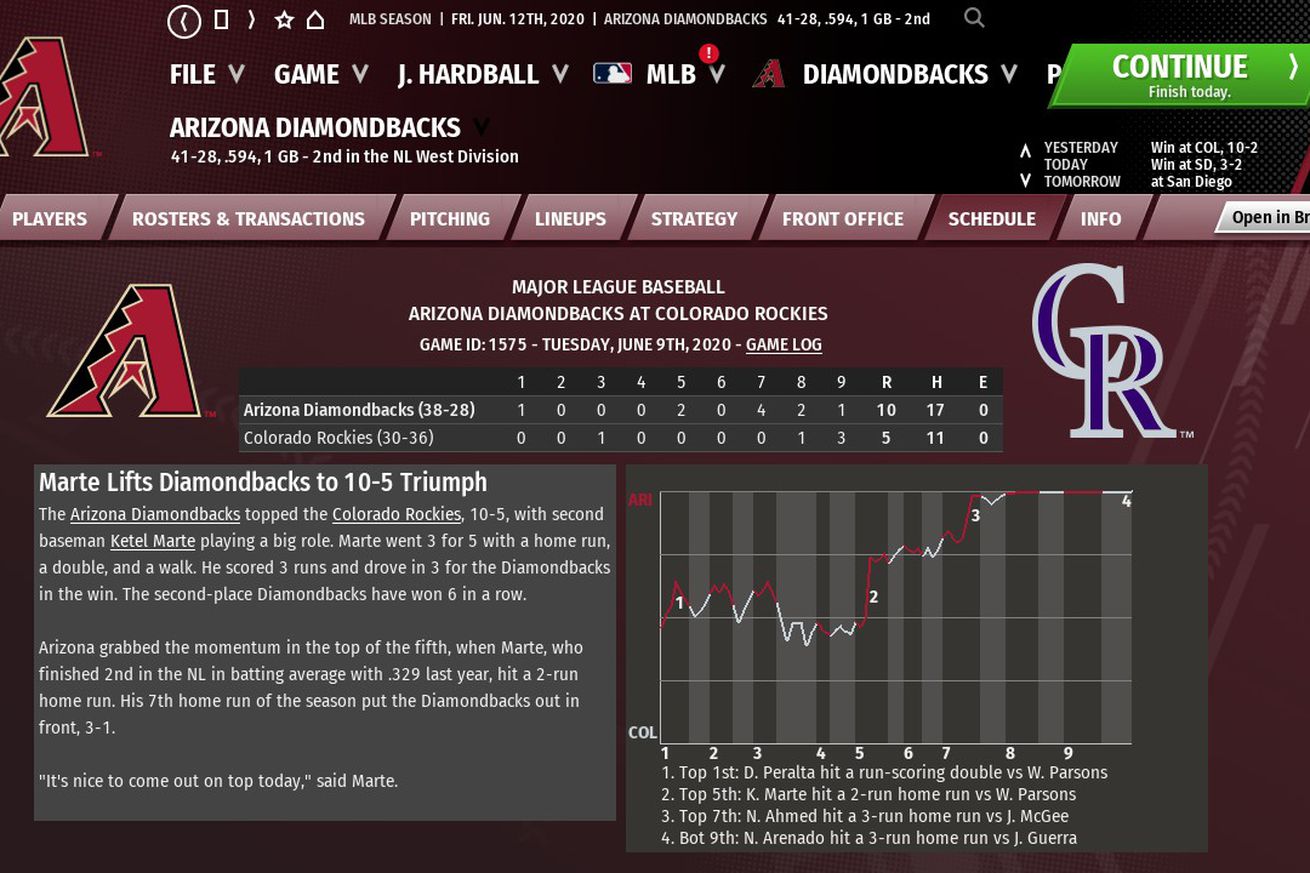 It was only a matter of time before the bullpen produced a poor outing. At least this one still ended in a win.

The Diamondbacks took the field in Colorado, looking to extend their five-game winning streak. Despite his penchant for surrendering the long ball, fans still had to feel good about Robbie Ray taking the mound for the series opener. The left-hander has been looking more and more like his dominant 2017 self, providing some vindication to those who were patient with him as he worked through his struggles as he transformed from thrower to pitcher.

Arizona fans had to feel even better about the game when the Rockies countered by sending Wes Parsons to the mound. There is a reason the journeyman right-hander has never been able to stick in the Majors or in a rotation.

The Diamondbacks wasted no time in giving Robbie Ray a lead to work with Starling Marte led the game off with a single. He promptly stole second base then coasted home when David Peralta followed with a double. The Diamondbacks other Marte contributed to the cause in the fifth inning when, following a David Peralta walk, Ketel Marte blasted a two-run home run 444 feet into right. That accounted for all the Arizona scoring through the front six innings. It was, however, more than enough.

Robbie Ray had another good outing, pitching six full innings while allowing only one run. That run came in the third inning when Parsons tried to help his own cause. He started the inning off with a double. He moved up to third on a single by David Dahl. One strikeout later, Nolan Arenado singled, scoring Parsons. Dahl was then thrown out attempting to steal third. Ray then followed that up by striking out Charlie Blackmon. The inning accounted for the only run allowed by Ray, as well as for three of the five hits he allowed on the evening.

With the Snakes up by two after six innings of play, it seemed like the game was safely in hand and that everyone would be going home in short order, providing a rapid game that might come in well under three hours of play. But, this is Colorado.

Merrill Kelly came on in relief of Ray, providing two innings of work during which he allowed a single run on four hits. This was not much of an issue though, as the Rockies too, turned to their bullpen for the seventh inning. Daniel Stumpf probably deserved better than what his line says he received. Ketel Marte was the first batter he faced. Marte topped a ball towards third base and legged out an infield single. Christian Walker then popped out to third. Josh Rojas struck out swinging, bringing Carson Kelly to the plate. Kelly managed to work a walk out of Stumpf, which brought an end to the right-hander’s night. He was relieved by Jake McGee.McGee promptly fell behind Ryan Mountcastle 2-0. With the count in his favor, Mountcastle waited on the fastball. When it came, he lined it into center field for a hard-hit single. Marte still managed to score on the play, with Kelly taking third on the throw home and Mountcastle getting in ahead of a throw back to second. As nice as it was to see good, aggressive base running by the Diamondbacks, it turned out to be unnecessary. The next pitch by McGee, this one to Nick Ahmed, was hammered for a three-run home run to left. Robbie Ray followed with a single of his own, his last act of the game, before Starling Marte grounded out to end the inning.

Adding the four runs in the seventh was not the end of the outburst by Arizona. In the eighth inning, David Peralta and Ketel Marte started things off with back-to-back doubles. Josh Rojas reached base. Marte scored on a single by Carson Kelly. The Arizona dugout was in high spirits as everyone seemed to be getting in on the hit parade. Not to be left out, pinch-hitter, Stephen Vogt, led off the ninth inning with a solo home run of his own. This gave the Diamondbacks seven runs through the final 2+ innings of play. This gave them an eight run led heading into the bottom of the ninth inning.

Alas, the bottom of the ninth did not just cruise by. Junior Guerra was finally bitten by his own tendencies. The right-hander walked a batter, allowed a single, struck out a batter, then allowed a three-run home run off the bat of Nolan Arenado. That forced the Diamondbacks to dip once more into the bullpen to finally end the game. Héctor Rondón came in and made very quick work out of Charlie Blackmon and Brendan Rodgers, needing only one pitch each to get the final two outs of the game.

The player of the game honors went to Ketel Marte. The Arizona second baseman finished a triple short of hitting for the cycle, walked, drove in three runs and scored three times.

Game two of the series against the Rockies is tomorrow. It will be a battle of the Jons as Jon Duplantier will face off against Jon Gray.