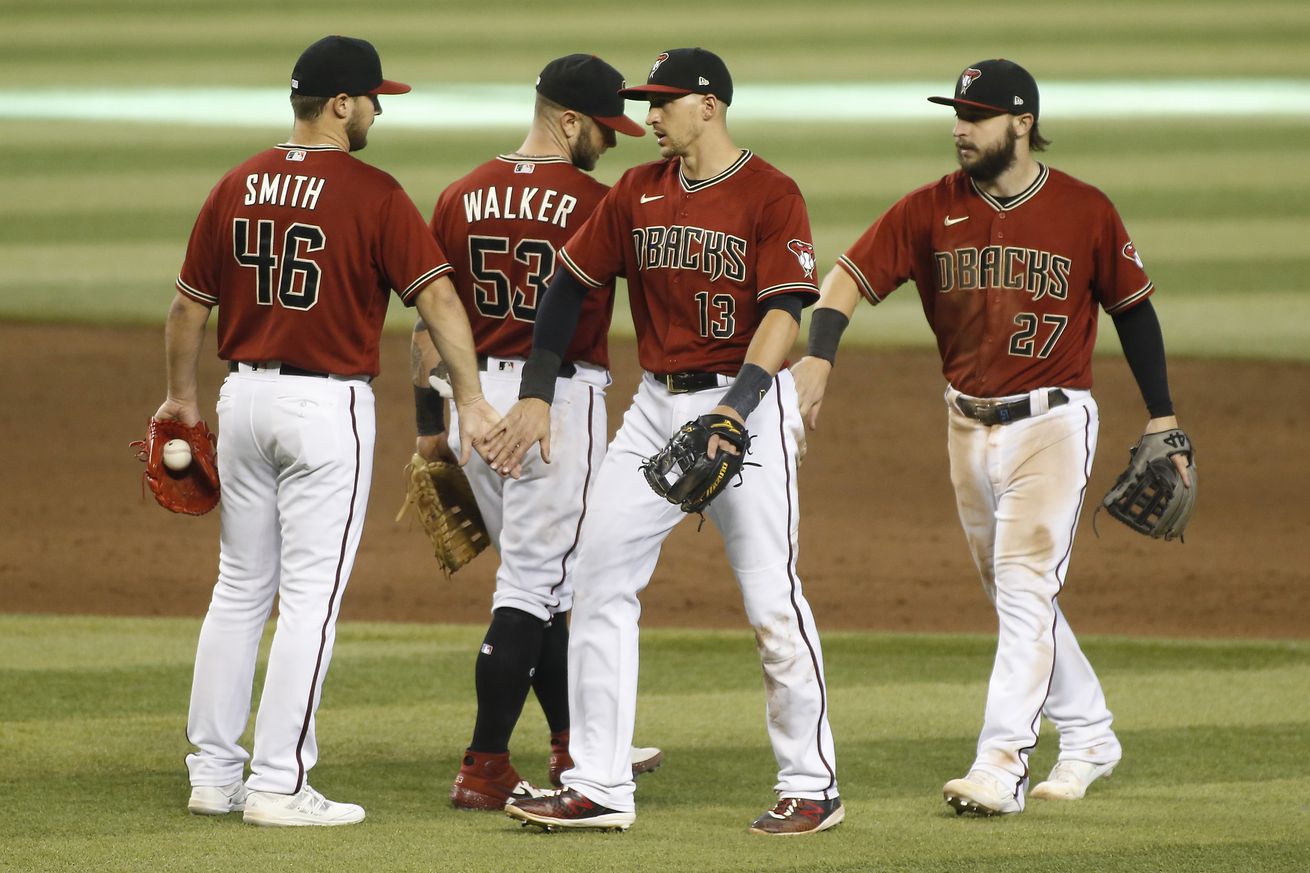 The Arizona Diamondbacks took on the Atlanta Braves in the Snake Pit’s simulated NLDS.

After a terrible start to open the season, the Virtual Arizona Diamondbacks went on a nine-game winning streak which put them in the Wild Card driver’s seat until the middle of August. Then, a combination of injuries and ineffectual offense put the Diamondbacks up against the ropes, forcing them to empty the cupboard as they went into game 162 of the season. They won that game. Then, they faced off against a ridiculously hot team in the form of Dakota Hudson, Paul Goldschmidt, and the St. Louis Cardinals. Once again, they found themselves against the ropes, as they found themselves on the short end of the stick in the sixth inning, their offense once again being stifled. Also, once again, they didn’t panic. They gutted things out. The stuck with the plan and emerged victorious, carving up the terrifically accomplished St. Louis bullpen like a Thanksgiving turkey. That punched their ticket to face the Atlanta Braves in the NLDS.

Early in the season (April through mid-May), the Braves vied for the best record in baseball. Eventually, they cooled off and only played as a good, not great team. They finished the season with a record of 95-67, first in the NL East by such a large margin that their regular season was essentially over at the beginning of September. (The Philadelphia Phillies finished in second with only 80 wins.)

With the regular season and an exciting NL Wild Card game out of the way, the stage was set. The 85-77 Diamondbacks travelled to Atlanta to face the 95-67 Braves for the right to go to the NLCS to face the winner of the Milwaukee/Los Angeles series.

Game 1 featured a showdown between Cy Young candidate, Robbie Ray, and ERA phenom, Mike Soroka. This was, as to be expected, a pitching duel. The Robbie Ray that took the mound was, largely the same Robbie Ray that had pitched all season long. He struck out a ton of batters, struggled some with command, and was prone to the longball. For the Braves, Mike Soroka continued to put up dazzling numbers that belied the actual on-field performance.

The fourth inning was a microcosm of Robbie Ray’s season. In the fourth, Ray walked Ronald Acuna and then surrendered a 3-2 home run to Freddie Freeman. He struck out the other three batters he faced. Robbie Ray’s final line for Game 1:

Mike Soroka was a case study in how the box score doesn’t tell the whole story. Soroka compiled six innings of two-hit shutout baseball. He walked two and struck out four. He also had nine batted balls with an exit velocity of 104 mph or more that went for outs. Soroka’s final line:

The Braves tacked on a third run in the eighth inning on a double and two sacrifices to give them a 3-0 lead. Meanwhile, Arizona’s offense continued to struggle. It was not until there were two outs in the top of the ninth that Arizona finally scored. The lone score came on a solo shot to left by Nick Ahmed – too little too late.

Corbin Martin took the mound for the Arizona Diamondbacks. The Braves countered with Kolby Allard. Much like the first game, this contest was all about pitching. Unlike the first game though, this game came down to a contest of bullpens. The Diamondbacks struck first in the is game when Carson Kelly hit a solo home run off of Allard in the second. Ronald Acuna countered with a solo bomb of his own in the fourth.

That concluded the scoring in the first nine innings. Corbin Martin managed seven full innings. Allard was out after 6 2⁄3 innings. The bullpens picked up right where the starters left off. The 13 combined outs remaining between the two teams only took 15 batters to accomplish.

In the tenth inning, the Braves got something working. Dansby Swanson laced a lead-off double into the gap in left center. A strikeout followed. Then a single to left threatened to bring a run home. David Peralta took a great route to the ball and made a strong throw in, freezing Swanson at third. A double play then ended the threat. Despite the momentum builder, the Diamondbacks did not respond well. It took the Braves’ Darren O’Day only five pitches to send the Diamondback back out to the field.

The twelfth and thirteenth innings were both quiet for both teams. Yairo Munoz drew a walk as the only player for either team to reach base. Then, in the 14th inning, Carson Kelly deposited a 2-1 pitch deep in the left field bleachers, putting the Diamondbacks up by a run. With Will Smith and Archie Bradley having already combined for eight outs, it was up to Zac Eflin to hold the lead for Arizona. The late-season acquisition proved up to the task.

The series shifted to Chase Field where Zac Gallen faced off against Kyle Wright. After two pitching duels, this one was a bit less stressful – at least if you are an Arizona fan. David Peralta and Ketel Marte both had home runs in this game. NIck Ahmed, Christian Walker, and Josh Rojas all had doubles. Carson Kelly had a four-hit game with four singles and two runs batted in. Wright only lasted 4 2⁄3 innings, allowing Arizona to get into Atlanta’s bullpen which had just pitched 7 1⁄3 innings only two days prior. Zac Gallen had no such struggles.

Arizona’s dominance of the game was only blemished by Steve Cishek in the eighth inning. The right-hander allowed two runs on two walks and three hits. Even so, this was not enough for the Braves to mount anything resembling a true comeback.

Luke Weaver go the nod for Arizona. Kyle Wright took the mound for Atlanta. For the third time in the series, the two teams played a tight game. Arizona’s scoring off of Wright came courtesy of a Christian Walker solo home run and Nick Ahmed driving in Josh Rojas from second with a two-out double in the seventh. Meanwhile, Ender Inciarte resumed his role as uber-pest to the Diamondbacks. The former Snake walked, stole a base, and had two hits in the game. He also scored three times and drove in a run.

Both bullpens were solid, only allowing a combined three base runners between the two teams and 18 outs.

This game featured a re-match of the starters from the series opener. Robbie Ray was not about to go down the same way twice. In this outing, Ray completed seven innings of work. The left-hander turned in one of his best outings of 2020.

On the other side of things, Arizona’s offense mad Soroka work. They drew four walks and rapped out five hits in the first five innings. This time, some of those hard hit balls missed gloves and found gaps. By the time Ray sat down after his seven full innings, the Diamondbacks held a four-run lead. A rare shaky bullpen outing was not enough to derail Arizona in this game. The offense added two runs of insurance thanks to an eighth inning two-run home run by Christian Walker.

The series moved back to Atlanta with the Braves facing elimination. Corbin Martin had the start for Arizona. Kolby Allard had an abbreviated start for Atlanta. Allard left the game with the bases loaded after 3 1⁄3 innings. Unfortunately, Arizona was unable to do much, scoring only one run after. Martin had a very average outing for Arizona. After five innings, the game was tied at three runs each. Andrew Chafin and Yoan Lopez allowed one run each in the sixth and seventh innings. After allowing Rojas to score from third as an inherited runner, they shut the Diamondbacks out the rest of the way.

Zac Gallen got the start for Arizona in the final game of the NLDS. The right-hander did not disappoint.

Arizona scored first in the fourth inning when Christian Walker doubled and then was brought home two batters later by Josh Rojas who doubled into the right field corner. The Braves scored both of their runs in the fifth inning off a walk, double, single, and sacrifice. Things started looking bad for Arizona in the ninth inning. Up by one, the Braves sent Zach Britton to the mound to close out the game and the series. Nick Ahmed doubled off the closer, was moved to third on a shallow fly to right by pinch-hitter Michael A. Taylor. Brandon Marsh then flew out to the warning track in left, deep enough for Ahmed to score.

In the tenth inning, Ketel Marte doubled and then took third on a fly out by Christian Walker. Carson Kelly walked, putting runners on the corners with one out. Josh Rojas worked a walk to load the bases. Yairo Munoz killed the momentum by grounding into an inning-ending double play. Archie Bradley needed 19 pitches, but he pitched a clean tenth, striking out two in the process.

The Diamondbacks were not able to get much going in the 11th. Daulton Varsho walked as a pinch hitter for Bradley, but nothing else happened.

In the bottom of the 11th, Freddie Freeman took Will Smith deep. The one-out solo shot was a walk-off which ended Arizona’s season.

The rest of the simulated season will be covered in the next installment, followed by a postmortem of Arizona’s season.