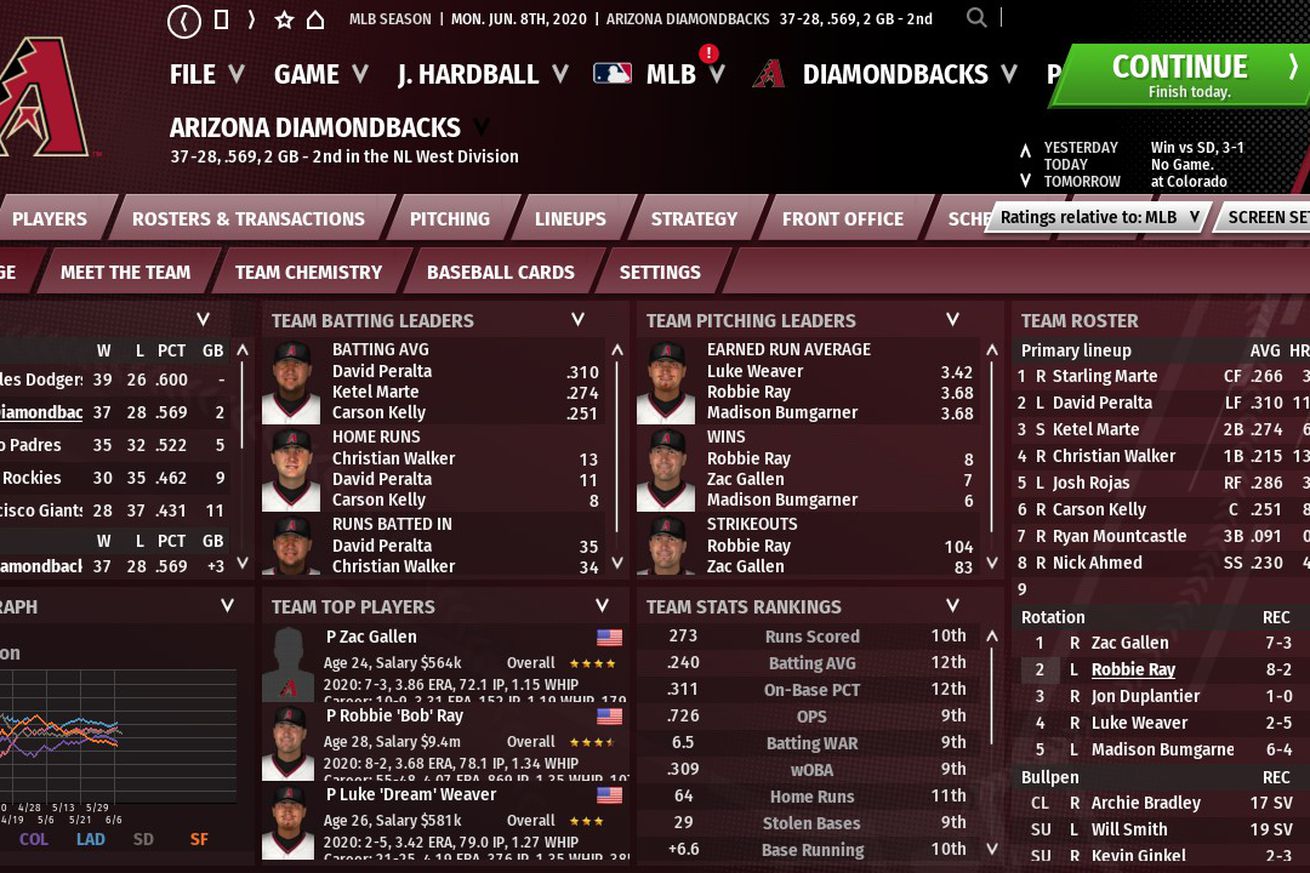 It has been a while since there has been one of these. There is a lot to cover.

Memorial Day and the MLB draft played their parts in quashing a couple of these off-day recaps. As a result, there is a lot to cover.

First thing, I received another Sim-initiated trade proposal. This one from the Seattle Mariners, back on May 25th.

As you can see, Jerry Dipoto was trying to pull a fast one and undo the trading away of Ketel Marte. At about the same time Marte had reached rock bottom, Dipoto offered to take him off of Arizona’s hands for a 27-year-old left-handed reliever. I was barely able to reject the proposal fast enough. Marte has rewarded the team by returning to form.

That isn’t to say that there has not been a massive shift in the team’s foundation, there has. This team is firmly in contention. It is second in the NL West, only two games behind the Dodgers and sits atop the Wild Card standings. There is no way that the real world team just stands pat when there are moves that can be made (within the budget) which improve the team moving forward. With that in mind, a pair of trades were made right after the draft. The first trade was made with, wait for it, the Atlanta Braves. Yes, I went down that dicey road once again. The Braves were looking to cut certain salary commitments to give them room to spend elsewhere. The Diamondbacks needed another left-handed reliever. It just so happens that the Braves had one of the best left-handed relievers in all of baseball. It also just so happens to be that said lefty, Will Smith, ranks as the only closer in the NL having a better season than Archie Bradley.

Now, the combination of Eduardo Escobar and Jake Lamb has been nothing short of a dumpster fire this season. The club has one option in AAA, Andy Young, who might just be the answer. The problem is, the roster is full. Could I find someone willing to take Escobar or Lamb off my hands to open up a spot? As it turns out, I could. A few offers were made for Lamb, all of them involved taking on a bigger salary than what Lamb is already making and amounted to a trade of bad contracts. That is not very appealing. Quite a few more teams were willing to make offers for Escobar, despite his triple-slash of .194/.248/.323, good for a 55 OPS+. Yes, he has been that bad. One of those teams willing to give Escobar a change of scenery was the Atlanta Braves. I decided to see what I could do to work Escobar into a trade for Will Smith. As it turns out, they were willing to make the trade straight-up, especially given the salary savings it provided them. Virtual Mike Hazen was not thrilled with the proposal though. That encouraged me to ask for a pot-sweetener, which the Braves agreed to.

In addition to unloading Escobar, making room for a new option at third base, the Diamondbacks added an elite left-handed reliever and a 24-year-old AA starter who dominated A+ ball and is just now getting reps at the higher level. That isn’t a major sweetener, but it is always nice to have more options in the pipeline. Besides, I needed to unload Escobar, so this feels a good deal like trading David Johnson do Deandre Hopkins.

Meanwhile, I have feelers out, looking for teams that are considering moving a third baseman. Sure, I have Andy Young in AAA, but there is nothing at all behind him right now, especially since Drew Ellis is recovering from a significant injury. Lo and behold, the Baltimore Orioles, a team in full rebuild mode, were looking to make room on their infield for one of their prospects by moving Ryan Mountcastle Interesting…

When I contacted the Orioles, I asked what they were looking for from Arizona to take Mountcastle off their hands. Unsurprisingly, they provided a list of names that these Diamondbacks have zero interest in trading; Ketel Marte, Carson Kelly, Nick Ahmed, Josh Rojas, Zac Gallen, and Luke Weaver were among those names. Those were their shooting for the moon names. They also provided a list of more reasonable names. One surprising name jumped out at me – Silvino Bracho. The Orioles were interested in trading for him as a potential closer. As right-handed relief is the one thing this Diamondbacks team has more than its fair share of, I made that trade in a heartbeat.

Despite being the NL’s best closer, Will Smith has tentatively been slotted in as the high leverage set-up man for Bradley, allowing Virtual Lovullo extra wiggle room when using Smith as one of the team’s two bullpen left-handers. This pushed Ginkel into the seventh inning role and Chafin into high usage lefty. With Arizona already sporting the best bullpen in baseball, the hope is that this move will take a page form the Yankees dynasty of the late-90s, shortening most games to six innings for the opponents, while having the likes of Ray, Gallen, Weaver, and Madison Bumgarner available to pitch those first six frames.

The addition of Smith, even with the removal of Escobar, has put the team in a position where there is not much left in the way of money for making any further deals. This means, these two trades were likely the only major trades the team will make this season. Hpwever, circumstances could change. Fan reaction was through the roof regarding the Snakes acquiring Smith. Also, it is still possible that some other team will come along and propose a trade that opens up some wiggle room for Arizona.

A quick look at the position players shows why the team has struggled so much on offense. The position players are a mix of stars and scrubs. There seems to be little balance. The hope is that recent changes will improve that. Obviously, Ryan Mountcastle just arrived, so there is no way to know yet if he will improve third base or not. However, given that Escobar and Lamb combined still amounted to one of the worst hitters in baseball, the bar for improvement is not very high.

Kole Calhoun lost his starting job a couple of weeks ago. That particular change has paid off handsomely. As one can see above, Calhoun’s bat just never got going. An OPS+ of 74 is tough to take from a slick fielding shortstop like Nick Ahmed. It’s entirely unacceptable from a right fielder, no matter how good his defense is. By contrast, Josh Rojas has been just as capable defensively, thanks largely to his blinding speed, and has provided an OPS+ of 132.

Ketel Marte has also returned to form, raising his batting profile significantly over the last two weeks. This improvement, along with the switch to Rojas, has now made the Arizona lineup at least five batters deep. Depending on Mountcastle and Starling Marte, they may go seven deep, leaving only Nick Ahmed as a hole in the lineup. However, even Ahmed is starting to find his stride again. He has also continued to provide elite defense, which is how he has provided 1.2 WAR, despite his poor batting.

Starling Marte’s 85 OPS+ is worrisome. However, it is still better than Calhon or Tim Locastro, meaning that the Diamondbacks will likely live or die in CF based on Marte’s future performance.

Gone is Mike Leake now. Also gone, for now, is Alex Young, the bullpen’s second lefty. Young’s demotion to AAA-Reno was only partly performance based. It largely came down to a matter of which bullpen arms had options. Bradley, Lopez, Ginkel, and Young were the arms with options. Young was the least dominant of that group, by a very large margin. Héctor Rondón and Junior Guerra are both still playing with fire, but they are also still getting the job done. The most important thing is, this pitching staff as a whole has been outstanding. Zac Gallen is bringing up the rear with an ERA+ of 115. If Arizona’s pitching can find a way to keep up this type of performance the rest of the way, hey could still take the division, which would make them particularly dangerous in the playoffs.