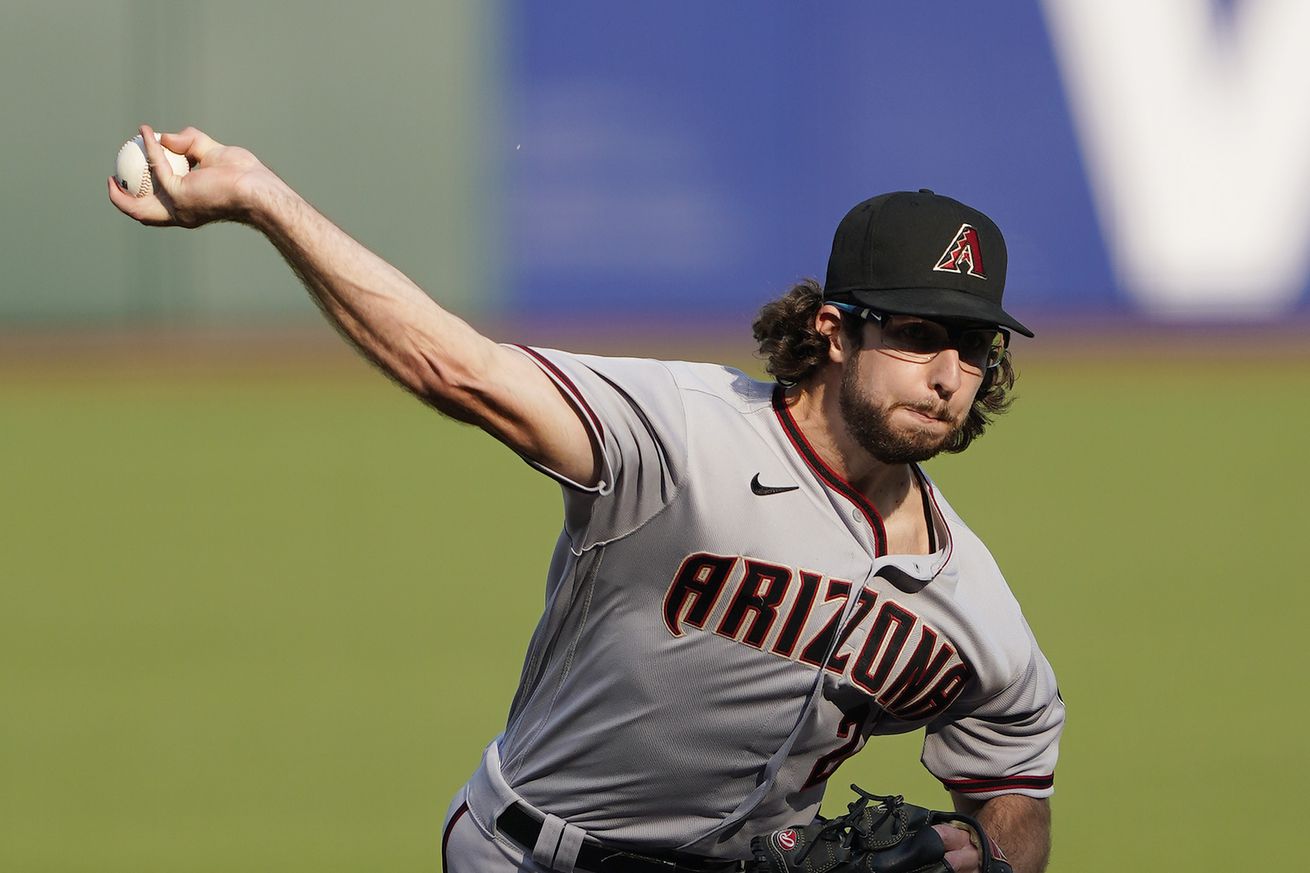 Zac Gallen gets the nod against the St. Louis Cardinals.

The good news is that the Virtual Diamondbacks made the postseason. The bad news is, they had to engage in a gutty game-162 performance to get there, meaning that this clearly exhausted team had no time to recharge before taking on the white-hot St. Louis Cardinals. Still, the one thing the Diamondbacks have mostly been able to count on this season has been their pitching. Robbie Ray and Zac Gallen are both rested enough to start the game. Given that all three of Andrew Chafin, Will Smith, and Archie Bradley pitched in the season clincher, the Diamondbacks decided to have Zac Gallen start this game. Over the course of the season, both Gallen and Ray averaged just a bit over six innings of work. However, Gallen had fewer short outings than Ray did. The goal was to get length out of Gallen and try to get the ball directly to the workhorses again, but with as few out needed as possible. That said, Robbie Ray was sitting down in the bullpen. At the first sign of real trouble, he would be called upon to come in and restore order, not at all unlike the dramatic outing he had in 2017. With that settled, it was time to run out the lineup.

Despite the recent struggles some of these players experienced down the stretch, I still am a firm believer in that you dancing with the ones that brought you. This lineup, though its highs and lows both, was the responsible for getting Arizona to the postseason. I didn’t seem right to start second-guessing substitutions at this point, especially since all reported themselves rested and healthy enough to play.

The Cardinals, who in any other scenario would be the scariest team in baseball, having played almost .700 ball for the final six weeks of the season, hosted the game and countered with the following lineup:

The first inning was much ado about nothing for both teams. The second inning was more of the same from Arizona. After two turns to the plate, the Diamondbacks were 0-for-6 with four strikeouts. The Red Birds managed a two-out walk by Paul DeJong, followed by a looping single to left off the bat of Harrison Bader. That brought up Yadier Molina, who promptly grounded out to Marte at second.

The third inning started with Josh Rojas lacing a single into right field. With an 1-0 count on Nick Ahmed, Rojas took off for second base, sliding in under the tag by DeJong, despite the solid throw by Molina. Ahmed moved Rojas over to third with a single to left, putting runners on the corners. Zac Gallen struck out looking. Brandon Marsh grounded one up the middle, but DeJong made a fantastic play, resulting in an inning-ending double play.

In the bottom half of the third, Hudson struck out to start things off. Tommy Edman flew out to Marsh in center. Wong worked his way to a single through a seven-pitch at-bat. Two pitches later, Wong was trotting across home, courtesy of a Paul Goldschmidt double that sure as hell looked like it was going to leave the park. O’Neill and Fowler were unable to move Goldschmidt along, but the Red Birds were on the board and had the lead.

The Diamondbacks went quietly again in the fourth inning. The only thing working for the Cardinals in the frame was that Molina managed to draw a walk from Gallen, clearing the pitcher Hudson, who once again struck out.

Again in the fifth, the Diamondbacks went down in order. Dakota Hudson was working like he found his groove. The Cardinals opened the bottom of the sixth with the top of the order coming up. Edman cracked a liner to right, but Rojas was able to get on his horse and track it down, making a great play running towards the corner. Kolten Wong singled on a liner that dropped just in front of a charging David Peralta, bringing up Goldschmidt again. Goldy, took a 1-2 pitch deep into left field, putting the Cardinals up three. O’Neill followed with a loud single, bringing Carson Kelly out from behind the plate. Whatever he said worked. Dexter Fowler grounded into a twin killing.

Sigh. The Diamondbacks went quietly again in the sixth inning, creating some consternation. This lack of offense is why they were the visiting team and not the hosts, or better yet, the division champions.

Zac Gallen took care of business in the sixth inning, running his pitch count up to 111.

With a three run lead, the Cardinals turned the ball over to Ryan Helsley to pitch the seventh inning. Maybe there was a collective sigh of relief from the Arizona dugout. It’s hard to tell in virtual space. Anyone but Hudson was a welcome sight. David Peralta started the seventh off by chipping a single to left. Ketel Marte, the regular season leader in triples, stroked himself a three-bagger to right field, scoring Peralta. Christian Walker followed with a fly to center that was deep enough to score Marte. Carson Kelly then got hold of one and sent it down the line in left and into the first row of seats. Just like that. it was a tie game. Yairo Munoz grounded out. Rojas struck out, leading the game into the stretch.

Yoan Lopez came out to pitch the seventh inning for the Diamondbacks. Seven pitches later, the Diamondbacks were back at the plate. Nick Ahmed clobbered a John Brebbia pitch for a double to left center, bringing up Lopez who was pulled for pinch hitter, Daulton Varsho. Varsho flew out to right field, advancing Ahmed to third. Brandon Marsh slapped a single through the right side, scoring Ahmed. David Peralta then flew out to shallow center. Ketel Marte looped a single over the head of a leaping Kolten Wang. Despite Fowler charging hard on the play, he was unable to keep the speedy Marsh from easily taking third. That brought up Christian Walker. Walker took a giant rip at a pitch, sending it sky high – to a patiently waiting Yadier Molina who eventually recorded the third out when the ball eventually came back down from near-orbit. At the end of seven the score was Arizona 4, St. Louis 3.

Now facing John Gant, Carson Kelly opened up the eighth with a walk. Munoz struck out swinging. Rojas advanced Kelly to second with a single to right. Nick Ahmed chased them both home with another double, this one to right center. Michael A. Taylor came on to pinch-hit for Smith. Taylor grounded a seeing-eye single off the end of his bat and through the right side. Running hard on contact, Ahmed scored all the way from second base. Taylor too, showed off his wheels when Brandon Marsh singled down the line in right, putting runners on the corners. Unfortunately for the Diamondbacks, Peralta then lined into an inning-ending double play when he hit one directly at the chest of Wong at second base.

Despite now having a four-run lead, the Diamondbacks turned the ball over to their closer, Archie Bradley, to pitch the ninth inning. His outing was anything but smooth. The inning went thus. Walk, strikeout, single to put runners on the corners, strikeout, walk to load the bases, strikeout. It may not have been pretty, but it still got the job done. It took 32 pitches, but it got the job done.

The Diamondbacks advance again to the NLDS where they will face the Atlanta Braves. The pitching match-up for the series opener in Atlanta pits Robbie Ray (18-6, 3.20) against Mike Soroka (15-9, 2.99).