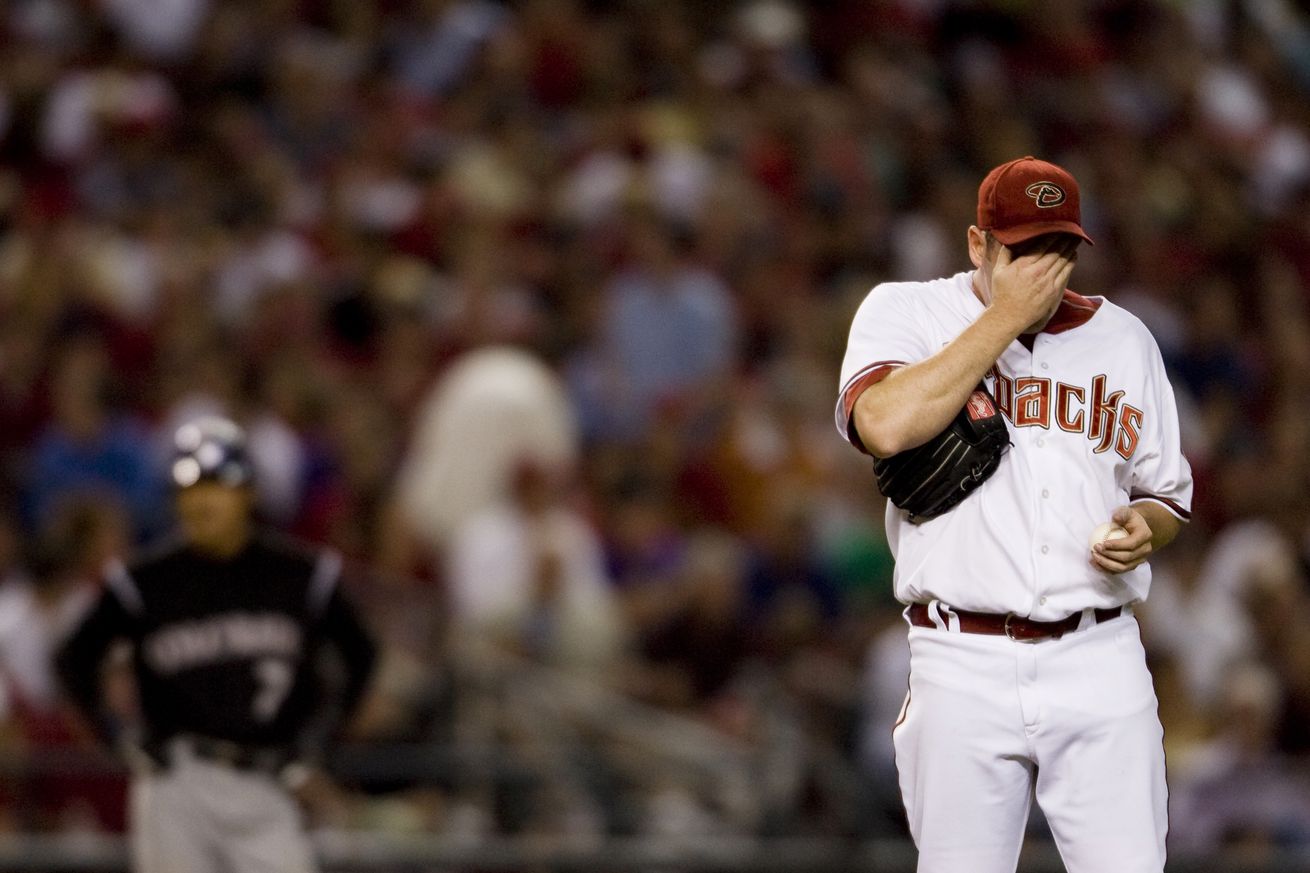 Would a healthy Webb have helped the D-backs into the playoffs more often?

Coming into 2009, there were few, if any, better pitchers in the majors than Brandon Webb. From 2006-08, he won the National League Cy Young award in the first of those seasons, and came runner-up the next two years. His 19.0 bWAR over that time trailed only Johan Santana among all pitchers. It wasn’t just quality, either, with Webb being among the most reliable of arms. Over four seasons, he had averaged almost 232 innings per year, most in the majors and ten more than anyone else bar Johan Santana. There was not much reason for most fans on Opening Day 2009 to expect anything different going forward.

However, there was a dark shadow looming. Webb had been in negotiations with the team on a contract extension, and in June 2008 looked to be in agreement on a deal for three years, worth $54 million. However, the D-backs were reportedly unable to get insurance, despite Webb passing a physical, and the offer was pulled. The concerns proved justified. Brandon’s start that April 6th proved not only his only one of the year, it was his final appearance in the majors. Multiple comeback attempts, here and with Texas, fell short, though he did not officially retire for almost four more years, Webb finally hanging up his cleats in February 2013.

A couple of years ago, we looked at what might have been for Webb, by looking at the closest comparable pitchers to him through his peak five seasons, and what they did over the rest of their careers. Averaging them out, Webb would have been expected to pitch for ten more years, throwing over 1,800 innings and been worth a total of slightly more than thirty bWAR. The article breaks down the average per season, to give a projection of what he might have done each year. Let’s use those and apply them to see how things might have worked out, had his body parts functioned as they had been, and if the team been able to get insurance and complete the three-year extension, covering the years 2011-13.

From that article here are the projection for those campaigns, as well as the two previous seasons (one under contract + one team option).

It’s difficult to look at the first two of those seasons, and see Webb as being a real difference maker for the Diamondbacks. In 2009, the team finished in the basement of the NL West, with a record of 70-92. That was five games worse than anyone else, so even if Webb’s campaign had been as good as his previous ones, it may not have been enough even to lift the D-backs out of last place. Dan Haren replaced Brandon as staff ace and had perhaps the best season of his career, with a 142 ERA+ and league-best WHIP of just a hair over one. But that only converted to fourteen wins, and no other starting pitcher had a winning record. The other five pitchers with 10+ starts combined to go 33-46.

Things got even worse in 2010, after the team traded away future Cy Young winner, Max Scherzer. The D-backs again finished last, and the distance behind fourth was a yawning 15 games. They could have had peak Randy Johnson and it wouldn’t have helped, as they went 65-97. Again, only one regular starter had a winning record, that being Daniel Hudson, who came over at the trade deadline and have one of the greatest second half in franchise history. He went 7-1 in 11 starts with a 1.69 ERA. But on a team that was 171⁄2 games back at the break – and, realistically, were out of the running much earlier, after losing 20 games in May – it was too little, and certainly far too late.

A remarkable turnaround for the D-backs followed, improving their record by one of the largest margins in recent MLB history. They were 27 games better, winning the NL West by eight games to set up an NLDS showdown against Milwaukee. That game went not just to the last game, but to extra innings in Game 5, before the Brewers beat the D-backs. That victory will remain always undeserved in the eyes of Arizona fans. For Milwaukee star Ryan Braun failed a drug test during the series, in which he went 9-for-18 with a 1.460 OPS. You won’t be surprised to hear I thought about writing another article for What If? week, titled “What if Ryan Braun hadn’t cheated?”

But the presence of a healthy Webb in the D-backs rotation might well also have been enough to tip the balance. Our projection has him posting a sub-three ERA for the year, almost two runs better that the 4.82 ERA posted by Arizona’s starters in the series. He would certainly have given the D-backs a better chance to win Game 1 or 2, which both went to the Brewers. Bumping Joe Saunders from the playoff rotation would also not have been a bad thing, considering he lasted only three frames in Game 4, though the D-backs won that one on the back of a five-run first inning. But in a series that went all the way and beyond, it’s not hard to imagine Webb being as much a difference-maker as Braun’s drug dealer.

If they had got past the Brewers, how far might the D-backs have gone? They would then have faced the St. Louis Cardinals in the Championship Series, a team who during the regular season, won four fewer games than the Diamondbacks. Arizona would have had home advantage there, too. The real NLCS ended up with the Cardinals upsetting the Brewers in six [Braun’s OPS was almost five hundred points lower, though still a decent .968]. They then mounted that famous comeback in Game 6 of World Series against the Rangers. after twice being down to their last strike. We can only wonder if the 2011 D-backs, with a rotation anchored by Webb, could have done the same.

The 2012 Diamondbacks won their first four games to lead the NL West on April 10, and get off to a good start in defense of their crown. However, it was the last day they’d be on top. Arizona spent almost the entire second half within three games of .500, and ended the year exactly even. Even though the projections no longer show Webb as able to reach Cy Young level, he’d still have been an upgrade over Saunders or Patrick Corbin, both of whom were worth only 0.5 bWAR. Indeed, the 2.5 bWAR projected for our hypothetical Brandon would put him ahead of every Arizona pitcher that year bar Wade Miley. But with the team missing out by seven games on a wild-card spot, it likely wouldn’t have mattered.

In the first half of the 2013 season, it looked like the Diamondbacks had a good chance to take back the title. On July 7, they were 41⁄2 games up on the Dodgers, though had only the fifth-best record in the NL. But Los Angeles reeled off an epic surge, going 46-10 over a two-month period, while the rest of the division fiddled. Arizona managed only another 81-81 record, this time finishing nine games back of the second wild-card spot. Once more, Webb would have helped – the 3.3 bWAR projection was better than any pitcher actually gave the 2013 Diamondbacks. However, it likely would only have meant finished eight games back of the Dodgers, rather than eleven.

The next time after that Arizona would reach .500 would not come until 2017, at which point Brandon would have been 38, and projected to be worth only 1.5 bWAR. So it’s probably fair to say that 2011 is likely the only season in which a healthy Webb would potentially have made a difference to the team’s fortunes. However, if you enjoyed watching ace-level Webb pitch during his prime years, there’s still a sense of loss. Webb’s injury robbed him of the chance at a big contract, and Arizona fans the opportunity to appreciatE him in action. Seeing a great pitcher work can make even the worst of seasons more bearable: anyone who watched the Big Unit in 2004 knows the truth of that.