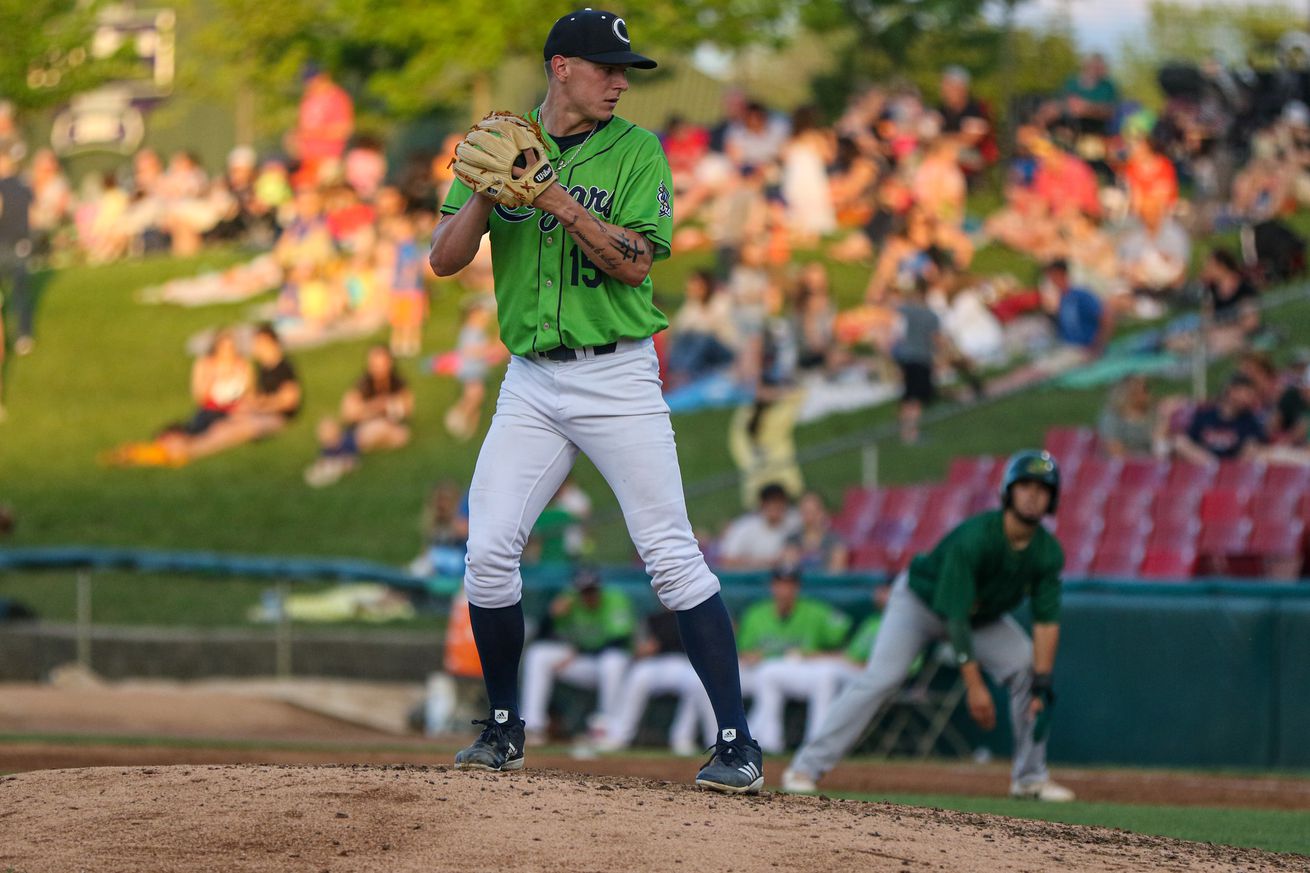 If and when D-backs prospects graduate, who can grab the No. 1 spot?

Kristian Robinson’s official spot on Arizona’s 60-man roster was yet another top prospect added to the expanded player pool this season.

The Diamondbacks now have all five of MLB Pipeline’s top prospects in their system on their 60-player pool with Robinson (No. 47 overall), Alek Thomas (No. 53 overall), Daulton Varsho (No. 82 overall), Geraldo Perdomo (No. 91 overall ) and Corbin Carroll (No. 99 overall) leading the way.

It takes 75 days of service time, 150 plate appearances or 50 innings in the big leagues for a player to lose prospect status. Outside of Varsho who is playing his first season in Arizona, we won’t see any of these players lose their highly touted status any time soon.

With that being said, when the Diamondbacks upper-level prospects graduate, who has the talent and potential to become the next top prospect?

Below are five names to pay attention to in the future. This list does not include any of the players mentioned above.

Blake Walston’s ceiling can place him atop Arizona’s system with his intriguing velocity and athletic frame. Since he was picked No. 26 overall out of Hanover High School in 2019, Walston already made three starts with Class A single-season Hillsboro in his first year. He was added to the Diamondbacks’ 60-player pool this season.

The lanky 6-foot-5 southpaw is equipped with a mid-90s fastball and three effective off-speed pitches in a curveball, slider and changeup. He controls all four pitches well in his arsenal and has above-average command for a pitcher his age.

Drafted by the Arizona @Dbacks with the 26th overall pick in the 2019 #MLB Draft, Blake Walston throwing his four-seam, curveball, and changeup. pic.twitter.com/6dphfpgE8p

As he continues to develop and grow on the mound, Walston can headline Arizona’s deep farm system in the future.

Wilderd Patiño’s numbers aren’t as eye-popping compared to other teenage phenom prospects, but he has an array of tools that can shine in the big leagues one day. Arizona signed the Venezuelan teenager for $985,000 in 2017 after an elbow injury voided his $1.3 million deal with the Texas Rangers, and he’s slowly climbed his way up the rankings.

Along with his impressive 2019 season, Patiño ultimately flashed his potential in the rookie-level fall league. He showcased his quick bat that makes contact to all fields and his plus-speed. His strong arm and quickness translates well to center field, where he’s primarily played the last two seasons. At the plate, Patiño has an advanced approach and he could tap into more raw power as he progresses through the minors.

#Dbacks Wilderd Patiño is the most exciting under-the-radar prospect I’ve scouted this summer; he should already be on every top 10 @Dbacks list. Here’s my breakdown of 6-games worth of AZL footage…I’ll have a full report up @ProspectsLive later today https://t.co/LMAqOSsNb1 pic.twitter.com/r8gM5L4Qjv

As more prospects graduate, Patiño can become the top prospect in the system if he builds upon his tantalizing raw ability.

It didn’t take long for right-hander Levi Kelly to climb up Arizona’s system. An eighth round draft pick in 2018 out of IMG Academy, Kelly’s velocity keeps ticking and his potential increases by the season.

Kelly pitched four scoreless innings in his first season with rookie league AZL D-backs in 2018. The following year, Kelly was thrusted to Low A Kane County and posted a 2.15 ERA, 1.11 WHIP and 126 strikeouts in 22 starts.

That huge leap in development translated to this season, as the Diamondbacks added him to their 60-player pool. He showcased his velocity-packed fastball and slider during the intrasquad scrimmages.

Kelly’s fastball regularly touches the mid-to-high-90s with a hard-breaking slider against lefties and righties. His violent delivery raises concerns about his command at the next level, but he’s cleaned up his mechanics the past two seasons.

There is some reliever risk if Kelly’s changeup doesn’t develop into a consistent third pitch, but there aren’t many pitchers in the system with as much upside as the flame-throwing righty at the moment.

Luis Frias has electric stuff with a high-90s fastball that touches 99 mph and a nasty 12-6 curveball, but he’s needed to refine his mechanics since singing with the Diamondbacks out of the Dominican Republic in 2015.

Originally a third baseman, Frias’ strong arm translated well to the mound. He made huge strides last season with short-season Hilsboro and Low A Kane County, posting a 2.83 ERA and 1.14 WHIP with 101 strikeouts in just 16 starts.

These pitches look fake. Luis Frias is ridiculous. He was nasty on the mound for us today. #TodosSomosSoñadores pic.twitter.com/us1KgxCngE

Frias earned Northwest League All-Star honors and answered a lot of questions about his future as a starter. He continues to develop a changeup as a third pitch, which could unlock his potential to become an effective starter in the big leagues.

Frias’ weight, command and ability to add a third pitch will ultimately decide his future, but he’s shown plenty of growth this past season to garner high praise in Arizona’s system.

It will take time to see what the future holds for outfielder Jeferson Espinal, but there is room for growth from what he’s showcased thus far.

Signing with the Diamondbacks in 2018 out of the Dominican Republic, Espinal has been highly touted for his speed and athleticism. He bursts out of the batter’s box with long strides and immediate bursts of quickness.

Espinal’s speed translates defensively to center field, where he often gets a good jump on the ball and plays it well in the air. He got his first taste of professional baseball last season, hitting .382 with two homers, two doubles, two triples and 22 stolen bases in the Dominican Summer League. He also batted .286 with four stolen bases in nine games with the rookie level AZL D-backs.

Espinal makes solid contact at the plate, and more raw power can be added to his slender 6-foot, 180-pound frame. His potential and ceiling are unknown at the moment, but he can be an intriguing prospect if he puts his tools together.