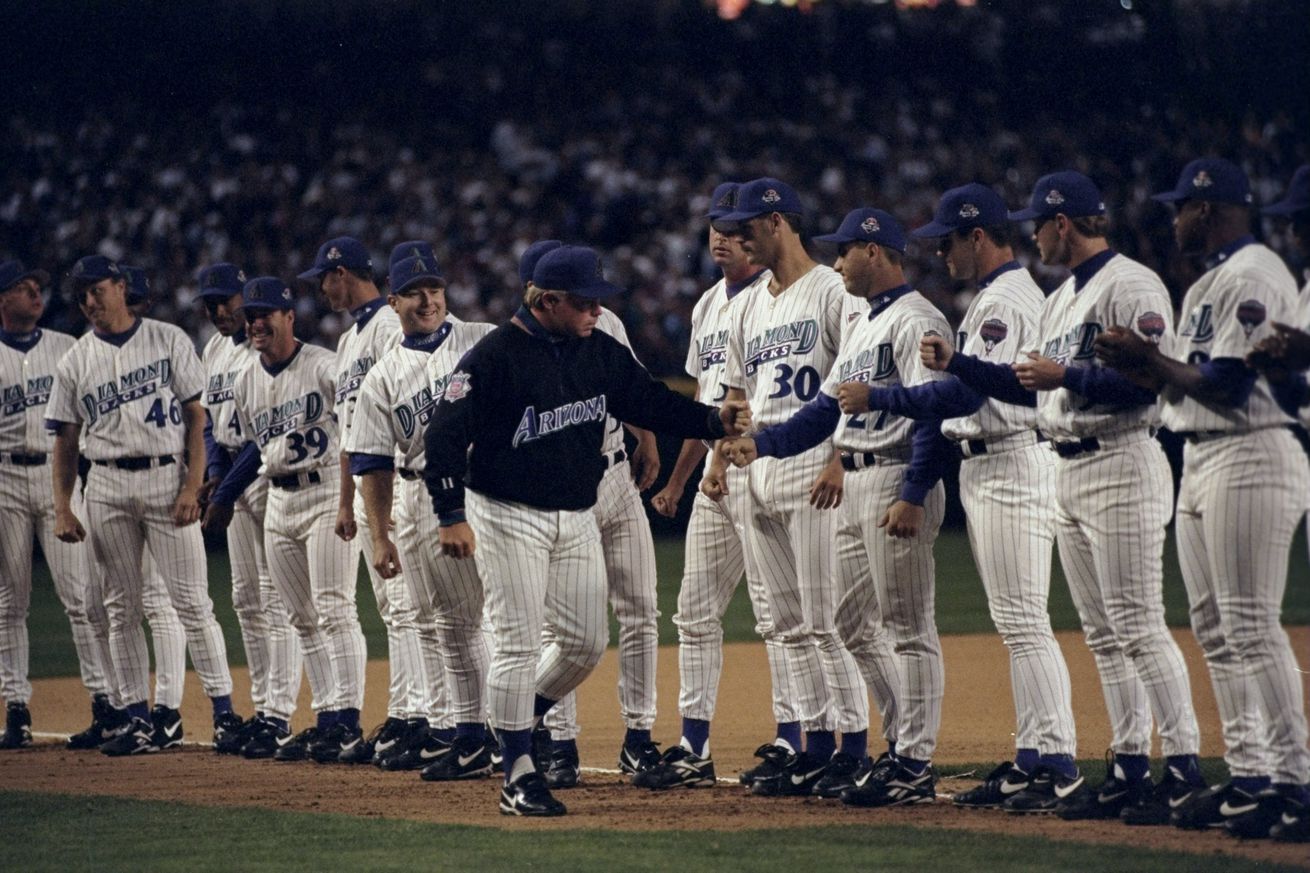 Can the inaugural Diamondbacks overcome Wade Miley and the 2012 version

The 2012 team are the 13th seeds here, and so are favored over the 1998 version, seeded down at #20. The 2012 team achieved an even record, going 81-81 under Kirk Gibson, though that was a disappointment after winning the NL West the previous year. It was Goldy’s first full season in Arizona, but Aaron Hill (5.1 bWAR) was the top position player, with Wade Miley (3.1) leading the pitchers. Back in 1998, Buck Showalter took the team to a 65-97 record, in a season that was more momentous for things other than the baseball. Jay Ball (3.9) edged Devon White at the top position player, while on the mound, Omar Daal (4.2) was the staff ace, despite an 8-12 record.

Andy Benes was the true Opening Day starter for that team, but I have to go with Daal for this “win or go home” match-up. Otherwise though, the WhatIfSports.com line-up matches the eight players listed by BaseballReference.com for that Arizona season. The same goes for the 2012 version. Ian Kennedy was the man on Opening Day, but over the course of the season, Wade Miley was the team’s most consistent starter, so I’m going with him. I did make Jason Kubel the man in left over Gerardo Parra, as he started far more games there, despite WIS’s preference for the latter. And I made myself sad by checking and confirming that, yes, Willie Bloomquist was indeed our most-used starting shortstop in 2012.

And let’s look in to Chase Field, where Miley is about to throw the first pitch…

Ryan Roberts drove in the go-ahead run for 2012 in the sixth inning, and Jason Kubel followed with a two-run homer in the following frame, as the 2012 D-backs (81-81) prevailed over the 1998 version of the franchise (65-97). Wade Miley allowed one run over six innings for the victory, on five hits and a walk while striking out six. Omar Daal took the loss, despite a solid outing where he gave up two runs over his six frames, scattering seven hits and a pair of walks, with five K’s.

It was 1998 who struck first, Matt Williams opening the top of the second with a shot into the left-field bleachers off Miley. Wade then hit Jay Bell in the knee, but settled down to keep the score 1-0. Both sides wasted opportunities in the fourth. Williams led off for 1998 with a single, but was picked off by Miley. And in the bottom half, Aaron Hill was thrown out by Devon White, trying to stretch a single into a double. That inning ended with 2012 leaving the bases loaded, Ryan Roberts striking out swinging against Daal.

It was the bottom of the sixth inning where 2012 finally came through. Jason Kubel had walked with one down, and an out later, Paul Goldschmidt cracked a pitch over the head of Devon White in center. With two gone, Kubel was able to score all the way from first, tying the game at one. Roberts then came through, big-time, singling back up the box, to plate Goldschmidt and give 2012 their first lead. 1998’s bullpen proved to be their Achilles heel: With two outs in the seventh, Felix Rodriguez walked Justin Upton, and Kubel just got enough of a pitch to clear the line in CF for a two-run shot off Clint Sodowsky [confirming my decision to start him in place of Parra!]. That gave 2012 a 4-1 lead through seven.

But 1998 weren’t going down without a fight. Brad Ziegler took over in the eighth, and after drilling Devon White in the back, Jay Bell managed to overcome Z’s sinker, like Kubel also delivering a wall-scraper to center. With the score now only 4-3, Travis Lee then walked, putting the tying run on base, before Ziegler got Karim Garcia to strike out, and David Delluci grounded out. 2012 got one of those runs back, after a Willie Bloomquist triple, Chris Johnson driving him home as a pinch-hitter for Ziegler. J.J. Putz came in for the save, and was greeted rudely by a Damian Miller double. But Putz then struck out Andy Fox, Kelly Stinnett and White, to close out the victory.

With two sides from consecutive seasons, there could be quite a few names pulling double-duty in this one!