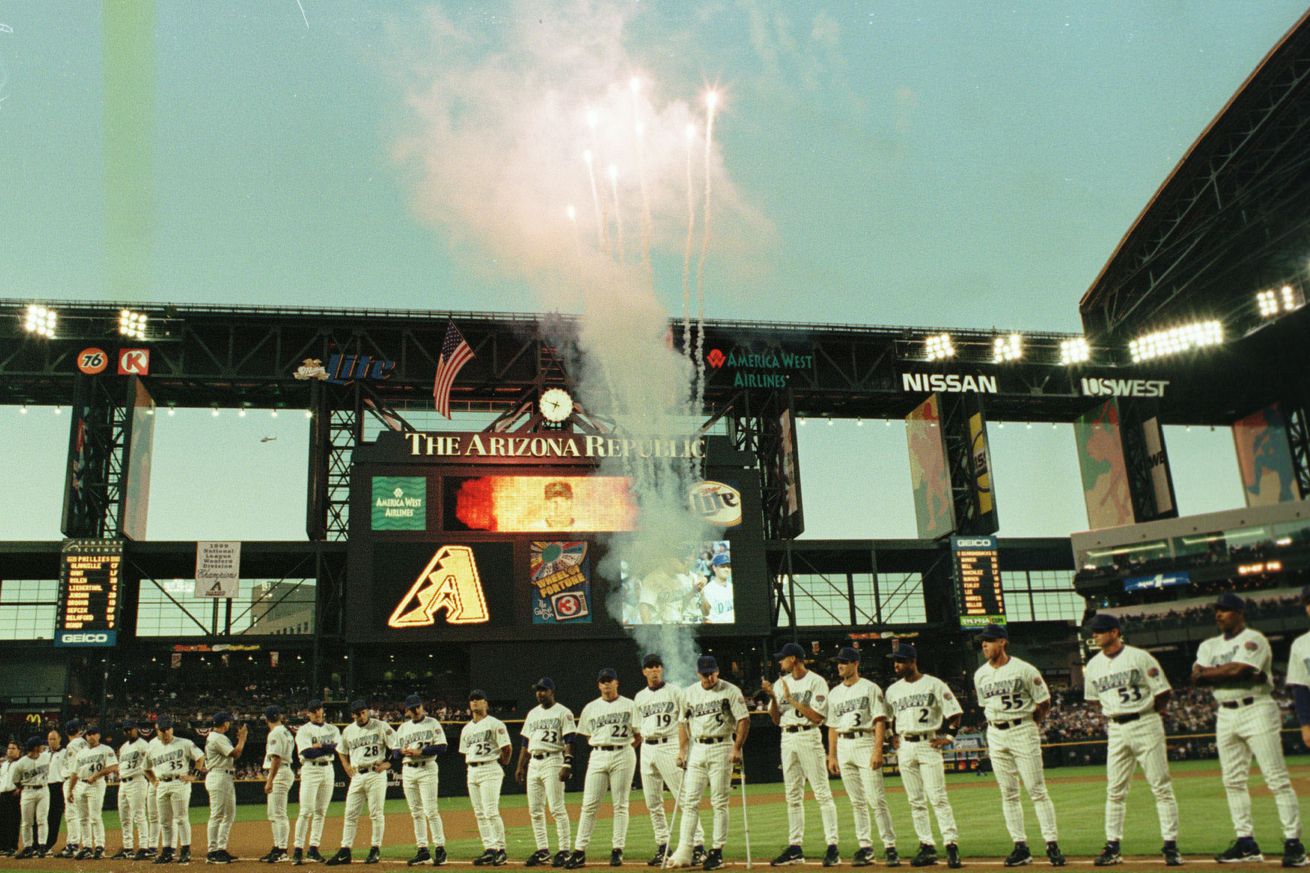 The quarter-finals get under way

We begin round three of the World Series of Diamondbacks tournament with the 2000 squad hosting favorites 1999. Randy Johnson got the start for each team’s previous matchup so he is unavailable for this game. Instead we’ll have 1999’s Omar Daal squaring off against 2000’s Brian Anderson

Ranked #48 in the top 50 all time Diamondbacks rankings , Daal was signed by the Dodgers in 1990 as an amateur free agent from Venezuela. Taken in the expansion draft from the Blue Jays in 1997, he made the unusual journey from reliever and swing man, to a full-time starter with the D-backs starting in 1998. Daal was soft tosser depended on deception and command. He had a great deal of success for the team in his first two years here.

He followed that up in 1999 by going 16-9 with a 3.65 ERA, 125 ERA+. Over the 98-99 season he threw 377 IP, posting 9 WAR. He didn’t fare too well in the NLDS vs. the Mets that year, getting knocked out early and taking the loss in game 3. The following year was a disaster for Daal, as he went 2-10 with a 7.22 ERA for the D-backs before getting traded t Philadelphia as part of the Curt Schilling trade. He didn’t fare much better after the trade that year, going 2-9, and ultimately leading the NL in losses with his 4-19 record.

He bounced back the next couple of years to post more or less league average seasons, but shoulder surgery in 2004 ended his career.

Brian Anderson, who was also picked up in the 1997 expansion draft, ranked #44 among top 50 all time Diamondbacks by the site. Jim covered him extensively HERE, and I’d suggest giving that a read. Wrote Jim on BA’s 2000 season:

2000 was Brian’s best all-round season, worth 4.1 bWAR – the other 12 years in the majors combined for 6.8. He was effectively the team’s #2 starter behind Randy Johnson for much of the year, until the trade for Curt Schilling down the stretch. He had an ERA+ of 118, despite striking out only 4.4 batters per nine innings

Here are the starting lineups for the contest. The 99 team was an offensive juggernaut. With mostly the same players, the 2000 team was not.

Matt Williams, batting clean-up for both sides, hit a solo home-run in the eighth inning to give his 1999 team the lead, and they became the first team into the Final Four. He also had an RBI double in the sixth for the top seeds. The 2000 team had tied things up in the seventh, with RBI from Damian Miller and Greg Colbrunn. Both Brian Anderson (2000) and Omar Daal (1999) pitched well, each holding the opposition to two runs over six or more innings, but neither figured in the decision. Greg Swindell took the loss, after allowing Williams’s homer, and Greg Olson was the winner, for his scoreless inning of relief.

After a scoreless first inning, it was the 1999 roster who struck first. With two outs in the bottom of the second, Greg Colbrunn connected on a pitch from Anderson, which hit just over the line beneath the batter’s eye in center field for a sole home-run, and a 1-0 lead for the 1999 D-backs. But both Daal and Anderson were otherwise in fine form. They were not particularly dominant on the day – they combined for only seven strikeouts over their 12.1 innings of work. But the defense behind them were making the plays. and neither side had an at-bat with a runner in scoring position until almost the end of the fifth inning.

That came after Colbrunn was hit in the arm by a pitch, in his first at-bat after the home-run. Was Anderson upset with the batter for some reason? Hard to say. After taking his base, Colbrunn advanced to second on a ground out, and Buck Showalter v. 2000 then called for an intentional pass to Kelly Stinnett. That allowed Anderson to get to his opposite number. It worked out for the pitcher, as Daal could only fly out to Luis Gonzalez v. 2000 in left. This ended the fifth, with 1999 still holding on to their 1-0 lead, and Daal then put up another zero in the top of the sixth.

They were then able to double the advantage in the bottom of the inning. Bernard Gilkey walked to open the frame, and was replaced by Jay Bell v. 1999 after a fielder’s choice. Luis Gonzalez v. 1999 then hit the ball to Bell v. 2000, but the double-play wasn’t quite turned, Gonzo able to leg it up the line. That proved to be crucial, as Williams then blooped a double into the left-center gap. With two outs, Gonzalez was going on contact, and was able to score all the way from first, giving the 1999 Diamondbacks a 2-0 lead after six innings were in the books.

2000 rebounded immediately, tying things up for the seventh inning stretch. Back to back doubles by Finley and Miller led off the inning, and got them on the board. Travis Lee then lined a single to left, putting runners on the corners, still with nobody out. Colbrunn v. 2000 came off the bench to hit for Anderson, and like Gonzalez in the previous inning, hit the ball on the ground to Bell. Yet again, the batter beat the throw to first, allowing Miller to score and tie the game up. Anderson’s final line was two runs in six innings, on just a pair of hits, with two walks (one intentional) and three strikeouts.

That was also the end of Daal’s night. He went 6.1 innings, also allowing two runs; he scattered seven hits and a walk with four K’s. Greg Swindell took over for him on the mound and closed out the half inning without further difficulty. Byung-Hyun Kim replaced Anderson for 1999 and got the first two outs quickly. He gave up a single to Stinnett and a walk to pinch-hitter Erubiel Durazo v. 2000, but regrouped to retire Gilkey and end the seventh. Greg Olson worked around a one-out single to Williams v. 2000 to put up a zero in the top of the eighth, but after getting two outs, Swindell gave up the go-ahead bomb, a laser off the bat of Williams.

Matt Mantei came in to pitch for 1999, and try to convert the one-run save opportunity, With one out, Lee grounded the ball through the hole into left for a single. Mantei got pinch-hitter Danny Bautista to pop out and Womack lined to Williams v. 1999 at third for the final out. The top seeds moved on, despite being held to just five hits – two of them by Player of the Game Williams, who also drove in a pair. Gonzalez, Miller and Lee each had two hits for 2000, and their tournament run ends here.

1999 continue to justify their top seeding, and have allowed only three runs through their first two contests. In the semi-finals, they will play the winner of our next match-up, which sees the upstart #13 seeds from 2012, take on the World Series champion Diamondbacks of 2001. That game will take place on Monday, so stay tuned!