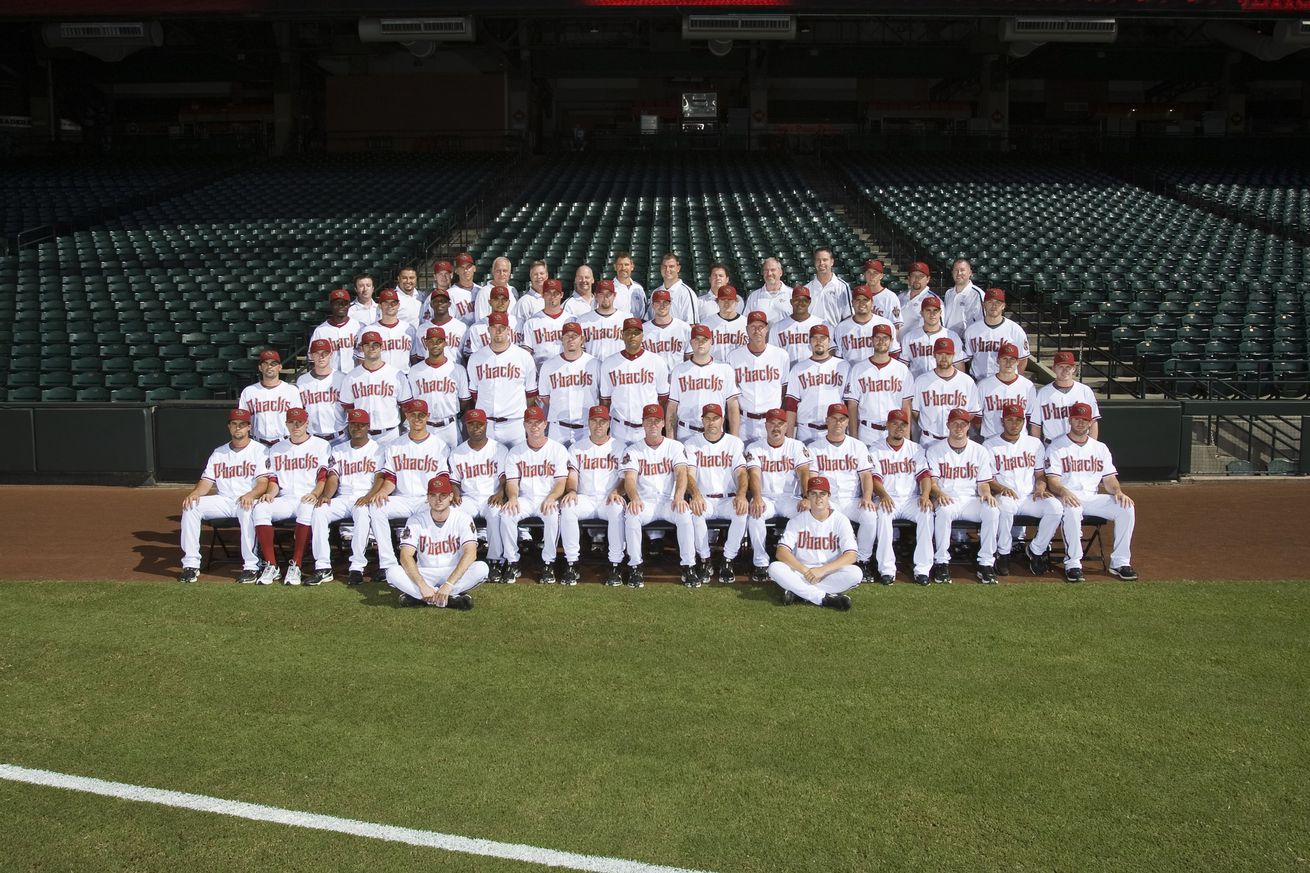 The final battle in the preliminary round, and we saved the worst for last.

Oh, dear. That 2004 roster. The system tried to put Chris Snyder as catcher, but he only started 27 times, with both Juan Brito and Robbie Hammock doing so more often. I’ve gone with Brito. Again, the auto-lineup bizarrely put Luis Gonzalez in center, rather than Steve Finley. While I admire the optimism there… No. About the only hope for the 2004 team is that they’ve got Randy Johnson starting. He and Brandon Webb combined for an ERA of 3.06, but it got real ugly thereafter. The four other men to make 10+ starts for the D-backs that year, all had an ERA above six. But with the Big Unit starting, you know you’re always going to have a chance…

The auto-generated 2008 line-up gave us Augie Ojeda at second. Much as I would like to go with that, I do feel that Orlando Hudson is probably just the better alternative. Stephen Drew was actually the best position player on that team, with 3.0 bWAR. This team’s strengths were much more on the pitching side, where most of the starting rotation – Dan Haren (6.1), Brandon Webb (5.6) and Randy Johnson (3.2) – surpassed Drew. Webb was the Opening Day starter, but I’m going with Haren, He gets a chance for redemption, after having taken the loss in our first preliminary round match-up, starting for the 2009 version of the Diamondbacks.

The final round finishes with the biggest shock to date, as #22 seed, the 2004 D-backs took out the 11th seed, the 2008 D-backs. They rode Randy Johnson to the win, the Big Unit taking a shutout into the ninth. He eventually fell two outs short, allowing one run on six hits and two walks; Johnson struck out 13 batters in a heroic 123-pitch performance. Shea Hillenbrand and Scott Hairston had home-runs in the ninth to provide much-needed breathing room for 2004.

There’s no arguing how terrible the 2004 Diamondbacks were, but Randy still won 16 games, the most ever on a 110+ loss team. No other pitcher with such a woeful outfit, has even reached ten wins since Bill Stoneman went 11-19 for the 1969 Expos. When the D-backs scored more than three runs in 2004, Johnson went 13-2. So the result here shouldn’t come as a surprise, even if it was probably closer than the score suggests. [As an aside, the MLB Network will be broadcasting two of RJ’s greatest games tomorrow. More on that this evening]

Meanwhile, Johnson was dominating through eight innings. He only allowed one runner past first base in that time. In the third inning, Chris Snyder doubled to left, and was then bunted over by Dan Haren. But Chris Young wasn’t able to get the tying run in from third, staring at strike three, and Stephen Drew grounded out to end the inning. Haren, meanwhile, pitched well enough, going seven innings of two-run ball, on four hits and a walk with nine strikeouts. But he took his second L of the tournament.

With the score still 2-0 in the ninth, 2004 were able to break it open against Chad Qualls. The first four batters he faced all got hits: Hillenbrand homered to make it 3-0, Alex Cintron ripped a liner to left, then Hairston went year to left-center. Juan Brito dumped a bloop single in, and although Qualls stopped the bleeding, it was too late. With the score now 5-0 in favor of 2004, the only question which remained to be answered was whether the Big Unit would go the distance.

That wasn’t to be. Though he struck out Drew for his 13th and final K, Conor Jackson hit a triple, and finally got 2008 on the board with an RBI double. Hudson, then lined a single to right, and that was the end of Randy’s night: 8.1 IP, six hits, two walks and thirteen strikeouts. Greg Aquino came in, with it now being a save situation, and promptly got Chad Tracy to roll into a game-ending double-play.

That completes the preliminary round, with 2004 going on to face 2007 in the first round proper. They’ll have to do so with another pitcher, however, since Johnson will not be available for that game. But more on that in a bit. We’ll be taking a pause before the next batch of games, but expect an announcements on that front tomorrow….