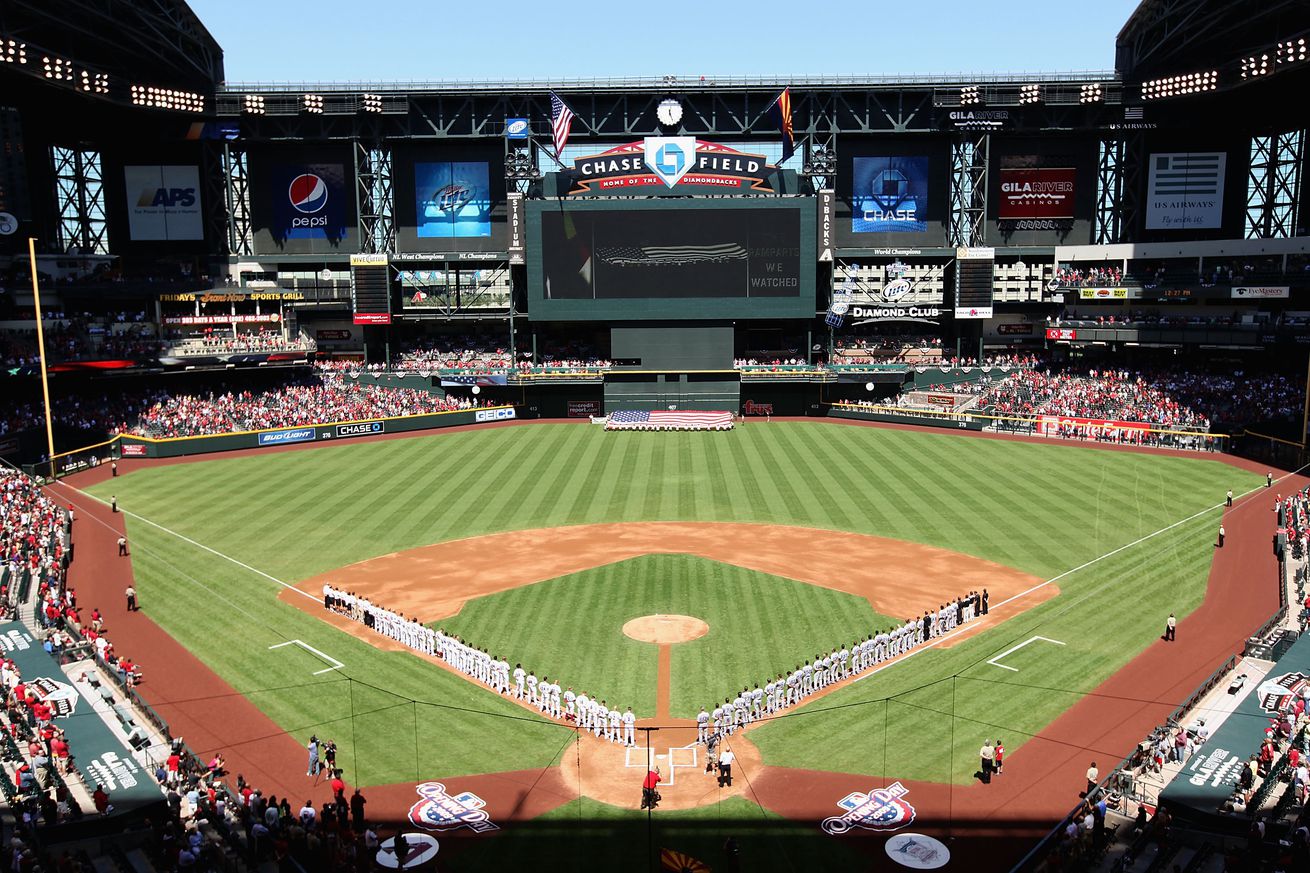 Our momentous tournament gets under way with a pair of sub-.500 teams. Oh, well…

We open by pitting #17 seed 2009 D-backs against the #16 seed 2006 D-backs. The former went 70-92, and got Bob Melvin fired 29 games into the season. He was replaced by the master of Organizational Advocacy, A.J. Hinch. He wouldn’t last long himself, but went on to greater success with the Houston Astros. Though that probably deserves an asterisk now. Justin Upton was the star on this team, posting 4.0 bWAR, while Dan Haren’s 6.5 bWAR anchored the pitching staff. The 2006 team was the first under GM Josh Byrnes: Melvin was also manager, while Hinch was the farm director at the time. Orlando Hudson’s 4.1 bWAR led its position players, while Brandon Webb’s 7.0 bWAR was the Cy Young runner-up.

Below are the line-ups for the two teams. I made some tweaks to the ones initially suggested by whatifsports.com. Chad Tracy replaced Brandon Allen at 1B for the 2009 team, but I did opt for Ryan Roberts over Felipe Lopez at 2B, as TatMan played more often for the team overall. In 2006, the system inexplicably put Luis Gonzalez in CF. That would have been interesting at the best of Gonzo’s defensive times. And those were not 2006. So he went back to his usual left-field corner, swapping spots with Eric Byrnes. Here are the lineups for the game:

And with that, it’s over to Chase Field, for the game…

Brandon Webb went seven innings for the win, allowing four hits and a pair of earned runs, as the #16 seeds from 2006 held off the challenge of #17 seed, the 2009 Diamondbacks. Webb did struggle with his control, walking four, including one to Justin Upton with the bases loaded, striking out three. Dan Haren also went seven innings, but took the loss as he gave up four runs on five hits and three walks, striking out seven.

After a scoreless first, 2006 jumped out to a lead in the bottom of the second that they would never relinquish. Orlando Hudson lined one back up the middle to lead-off, and Luis Gonzalez followed with a walk. It looked like Haren might escape, retiring Chad Tracy and Johnny Estrada, but the third out proved elusive. Shawn Green doubled to left, scoring both men, and then Brandon Webb helped his own cause, grounding a pitch through the hole to left-center for an RBI single and a 3-0 lead for 2006.

However, Haren immediately replied in kind. His one-out double off Webb scored Ryan Roberts all the way from first with one down in the third, Roberts sliding into home just under the tag from Johnny Estrada, after Gonzo’s throw. This seemed to rattle Webb, who hit Chris Young with a pitch then walked Stephen Drew and Upton. The latter cut the lead to one, with the bases still loaded and only one out. But Montero could only fly out shallowly, and Mark Reynolds went down swinging on a pitch out of the zone, wasting the chance for 2009 to pull level.

Both pitchers then settled down, and there was no more scoring until the bottom of the seventh. Chad Tracy got things going with a single, but looked likely to be stranded there. However, A.J. Hinch replaced Webb, who had thrown 98 pitches, with a pinch-hitter. And rookie Stephen Drew came through with an RBI double off the bench, giving the 2006 team a 4-2 lead. Hinch then had to turn to his bullpen: Luiz Vizcaino worked a 1-2-3 eighth, and Jose Valverde struck out the side in the ninth, after allowing a single to Gerardo Parra. In between those two, Eric Byrnes added an insurance run off Juan Gutierrez with a solo home-run, completing the scoring.

I’m particularly interested in who you think should be the starting pitchers for these two teams. I will actually have already selected them by the time this hits the SnakePit, but unike Haren and Webb today, there is far less of an obvious “ace” on these two rosters.