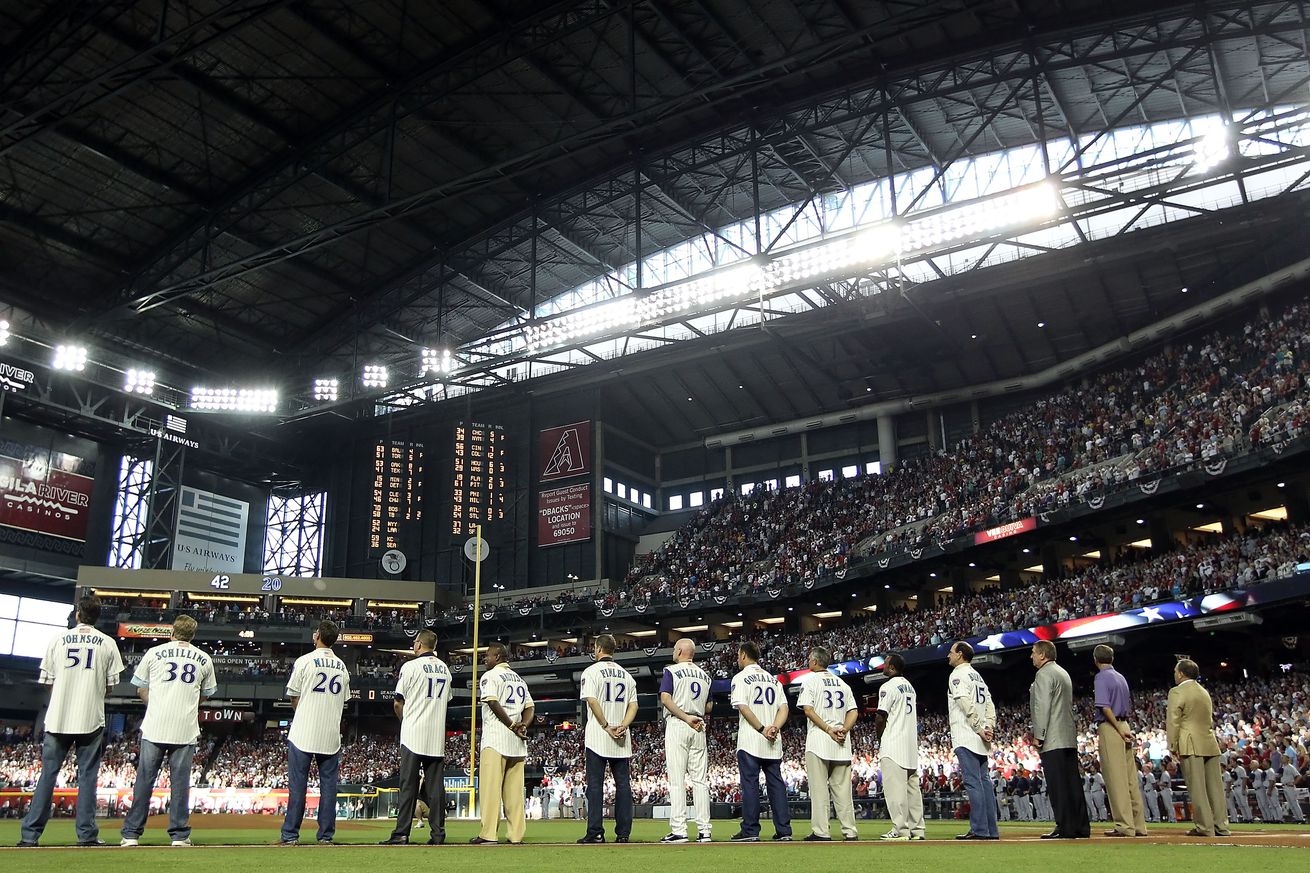 Our second look at the World Series champions, and winners in the pre-tournament poll. Can they prevail?

When we last saw the 13th seeded 2012 Diamondbacks, they were in the process of knocking out 4th seeded 2017 squad in a wild 12-8 slugfest. Recap of that game HERE

In their last game the 2001 team had an unexpectedly difficult time dispatching 2013’s version. Curt Schilling and Wade Miley both gave up 8 runs. Luis Gonzalez delivered a 9th inning walk off homerun thanks to Heath Bell delivering…well a Heath Bell experience. Recap HERE

Since those links have the reviews of the respective seasons of both teams, let’s go down a rabbit hole and play a game of tale of two pitchers. Below table is a couple of righties compared head to head over a three-year span, (2010 thru 2012). They were the same age through that time span as well, (age 25-27)

This is three full seasons with nearly 100 games started for each of them. So not a small sample size. I think by any objective measure we can safely say that Pitcher A was a little bit better starter. He threw more innings, more IP per start, (over 6 1/3 vs 6) had slightly more WAR, a better Win %, a better ERA and ERA+, and better batting against numbers. (Lower OPS+, lower HR%, lower Walk Rate and even lower BABIP). Pitcher A was less hittable and walked fewer guys. Pitcher A did strike out a lot more batters though.

Many of you will have figured out already that this is Ian Kennedy (The starter for this game) compared head to head with Max Scherzer for the first 3 years after they were traded for each other. It may seem ridiculous to compare the two now, hindsight being 20-20 and all. But for the 1st several years after that trade it was by no means clear that Max was going to become what he became or even that he would end up being better than Kennedy. He struggled with high pitch counts, short outings and inconsistency. Through his age 26 season he was the right-handed version of Robbie Ray.

That same year 2013 Max won the first of three Cy Young Awards over a 7-year run in which he’s never even been outside the top 5 in the CY voting. That has him on a Hall of Fame path and D-backs fan wondering what might have been. However Max became a free agent after the 2014 season and it seems unlikely the Scott Boras client would have signed with the Diamondbacks. What the D-backs missed out on really was 2013-2014 seasons from Max. Everything from 2015 would have been for another team anyway.

In 2013 the D-backs were a 81-81 team. Max put up 6.5 WAR for the Tigers. It’s not unreasonable to say that minus IPK and plus Max that year would have been an 8 win turn around to 89 wins. The Dodgers won the division with 92 wins, but maybe some of the extra D-backs wins would have come against LA. The Pirates won the Wild Card with 94 wins in 2013. So even with the extra 8 wins the D-backs probably still don’t make the playoffs.

In reality, the D-backs didn’t actually miss out on much, as hard as that may seem to believe. One could even make the case that without the trade, there is no 2011 division title, as Max was 15-9 with a 4.43 ERA that year.

I was working for Josh Byrnes at the time of this trade. I was not consulted, and I was upset at both the fact that Max was traded and I wasn’t asked my opinion. I was told they knew what I would say. It was ironic that IPK was the guy they got for him, as I had been a proponent of trying to get him. I thought he was good buy low opportunity after having shoulder problems and a rocky start to his career in New York. I never would have agreed to trading Max for him though. I was not posting on public forums in 2009 and 2010 while working for the team. The argument I made above however will look familiar because I made it here at least once or twice since 2011 once I left the team and started posting publicly again.

I’ve been all over the place with this trade. I was upset about it at the beginning, defended it in the middle, lamented losing out on Max’s HOF Peak, but still make the case that it wouldn’t have mattered much.

Damian Miller caught 99 of 139 starts made by Randy Johnson from 1999 thru 2002. This was the best stretch of Johnson’s illustrious career. Looking at catchers that caught RJ for at least 100 innings, Johnson had a lower ERA, (2.45) and lower OPS against (.602) with Miller than any other catcher except Chris Snyder, who caught Randy for just 123 innings compared to Miller’s 733.

One could also make the argument that Miller was in the right place at the right time, getting to catch Johnson while he was at his absolute zenith. In fact, in two of the four seasons, 1999 and 2002, RJ had even better numbers when caught by someone other than Miller. In 2000 it was almost a push and in 2001 Miller caught all but four of the starts.

The 2012 squad has better OPS+ than the 2001 team, but they’re going up against Randy Johnson. Will they be able to pull off another upset?

Through six innings, this was a pitcher’s duel, with Randy Johnson leading 2001 to a 1-0 lead over 2012, thanks to an RBI double from David Dellucci in the second inning. But then all hell broke loose. The two sides combined to score fifteen runs over the final three innings, as neither bullpen could get an out. First, 2012 scored nine unanswered runs to take a huge lead. But their bullpen imploded, and by the time J.J. Putz closed out the upset win, 2001 had the tying run on base.

Early on, however, both starters were in full control. Ian Kennedy held the powerful 2001 offense to three hits through his six innings, with one walk and five strikeouts. But two of those came in the third, doubles by Matt Williams and Dellucci giving 2001 the lead. An intentional walk to Johnson helped Kennedy avoid further damage. Meanwhile, the Big Unit was proving better still, with six shutout frames. He did have to negotiate a lot more traffic, however, putting two on with one out in both the first and second innings. Johnson then settled in, retiring 12 in a row and not allowing any further hits through six innings, preserving 2001’s 1-0 lead.

And then, all hell broke loose.

2012 tied things up with one out in the seventh. Jason Kubel doubled, and Chris Young grounded a pitch through the hole for an RBI single. Kennedy was lifted for pinch-hitter Cody Ransom, despite having thrown only 83 pitches. But Ransom went down swinging for the second out. But Johnson couldn’t escape. Willie Bloomquist lined a single to right center, and then came the at-bat which opened the floodgates. Aaron Hill connected for a three-run home-run into the left-field bleachers, giving 2012 a 4-1 lead and chasing Johnson. He was charged with all four runs over 6.2 innings, on seven hits and a walk, with nine strikeouts. Bret Prinz recorded the final out, but the damage had been done.

It was to get much, much worse for 2001 in the eighth, as they allowed five runs, although only one was earned. Troy Brohawn allowed hits to three of the four batters faced, including an RBI double to Young. Adam Eaton came off the bench but struck out; then Williams booted a routine groundball for what should have been the third out, instead allowing Miguel Montero to score. And Hill then really made 2001 pay for the mistake, hitting his second three-run homer of the game to center. That made the score 9-1, and surely the game was over.

“Here, hold my beer,” said the 2012 bullpen. They had got a scoreless seventh from David Hernandez, but Brad Bergesen gave up a single to Tony Womack and a two-run homer to Steve Finley, making it 9-3. Brad Ziegler took over, and despite giving up a single to the first batter he faced, retired the next three to end the eighth. He wasn’t so lucky in the ninth, however. Three singles loaded the bases with one out, and Kirk Gibson turned to Bryan Shaw. It did not go well, Shaw walking first Finley, then Luis Gonzalez. each driving in a run, and bringing the tying run to the plate.

Gibson brought in closer Putz, who retired Williams on a fly-ball to left center. However, Mark Grace brought two more runs in with a single, to put men on the corners with two outs and represent the tying run. But Putz froze Dellucci for strike three, and 2012 had pulled off another big upset. Hill’s three hits and six RBI for them won him Player of the Game honors, with Young also getting three hits. Finley had two hits and a walk while driving in a trio of runs for 2001. However, it’s 2012 who move on to the semi-finals, and will need to pull off an even bigger upset, as they’ll be facing top seeds, the 1999 D-backs.

We move into the bottom-half of the draw for the third match-up in the Elite Eight. Second seeds, the 2002 Diamondbacks will seek to advance against the 2018 Diamondbacks, seeded #10. But you will have to wait a while, as the next scheduled off day for our virtual D-backs is not for more than two weeks. That contest will take place on Thursday June 25.